According to the latest data, the unemployment rate in Williston, North Dakota — and surrounding Williams County — is less than 1%, at 0.8%.

That’s the lowest rate ever recorded in the state.

Which means if you don’t have a job in Williams County right now, it’s because you don’t want to work.

As you know, Williston sits on top of the monster Bakken shale oil formation.

And the current data and stories coming out of Williston are nothing short of astonishing...

Williston’s main airport, Sloulin Field, is one of the fastest-growing airports in the nation — and keeps adding new flights almost every month.

Just east of Williston is the city of Minot. According to a recent article by the Minot Daily News:

Minot's air travel numbers have been on the rise since 2009, much of it attributed to the oil boom.

Air travel out of Minot increased 63 percent and 85 percent, respectively, in January and February, Solsvig said.

"If that rate continues, we're going to break 220,000 easily this year for a building that was meant for 100,000 passengers a year and two airlines, so this is why we are fast-tracking every project that we're trying to do," Solsvig said.

And it’s not just North Dakota seeing a robust increase in air travel.

Stinson Municipal Airport, a 96-year-old airport in South San Antonio, Texas, is seeing major traffic growth due to the drilling boom in the Eagle Ford.

Coming back to the East Coast to the Marcellus, we see the same thing...

Williamsport, Pennsylvania, used to be best-known for housing the Little League World Series. Now it's known for Marcellus Shale drilling.

One natural gas well in Williamsport requires 77 tractor-trailer loads to transport equipment to the site. Other traffic comes from workers building pipelines and hauling water as waterlines are developed.

And last year? About 11,000 carloads carried supplies like fracking sand and drilling equipment.

Speaking of Pennsylvania, the Keystone State is expected to add nearly 600,000 new jobs by 2020, according to a Wells Fargo study.

Wells Fargo’s most realistic scenario projects Pennsylvania will add an additional 570,000 jobs by the end of 2020.

Of those jobs, approximately 100,000 will be created in what they call “primary shale” counties — counties where drilling is happening — and those jobs are directly or indirectly attributable to shale drilling.

An astonishing 60 percent of new jobs created in Pennsylvania over the next eight years will be directly or indirectly attributable to Marcellus Shale drilling.

Because of the drilling boom — and thanks to the tsunami of natural gas that has hit the market, driving the price down to a decade low — manufacturing has returned to the U.S... and it is booming.

Because the U.S. has the cheapest natural gas in the world. 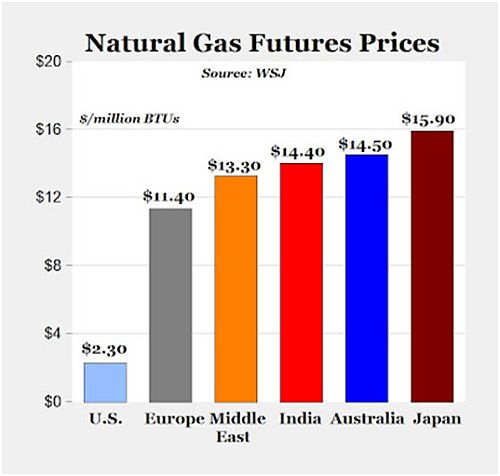 This gives the U.S. an energy advantage over everyone else.

According to a recent Wall Street Journal article entitled "Steel Finds Sweet Spot in the Shale":

Low natural-gas prices represent a competitive advantage across the U.S. manufacturing base. The price of natural gas is $11.35 per million BTUs in northwest Europe and $15.9 in Japan, according to researcher Platts, compared with U.S. levels of $2.27.

Companies that had left the U.S. in sectors like chemicals and fertilizers are talking about coming back to take advantage of the low cost of gas.

And this is having a dramatic impact on the manufacturing base in the United States.

In fact, last year was a record profit year for American manufacturing.

According to a Census Bureau report on U.S. manufacturing:

The $598.3 billion of profits for American manufacturers last year represented an increase of more than 25% from the $477.7 billion in profits the previous year, and follow a 67% gain in 2010. In contrast, the after-tax profits for all U.S. corporations are on track to increase by less than 5% for 2011 based on data currently available through the third quarter of last year, following a 19% increase in 2010.

Well, here you go. The jobs are coming back, and they’re high-paying jobs...

Brought to you by the oil and gas industry.