The Mother of All Arbitrage Plays

Around 1400 B.C., a goat herder saw a burning flame coming out of a spring. He also noticed his animals acted strangely after wandering near a particular chasm on Mount Parnassus.

After investigating, he found himself "agitated like one frantic."

The ancient Greeks named it Delphi.

As you know, the Oracle of Delphi was one of the most powerful beings in the ancient world. Because of her prophetic ramblings, the 300 Spartans fought at Thermopylae, Alexander the Great conquered the known world, and the inventor of gold coinage, Croesus, lost a kingdom.

Recent studies by a team of scientists from Wesleyan University discovered that the source of these brain-altering vapors was a mixture of ethylene and methane.

Ethylene is a natural gas that can be used as a anesthetic. It produces euphoria, excites the nervous system, and has a sweet smell. This matches the descriptions of the historian Plutarch.

Obviously, these effects were attributed to divinity. A temple was built and a young female virgin was placed in charge.

The Oracles grew fabulously rich on their predictions. At one point, the temple was the largest storehouse of gold in the world, and was not surpassed until the rise of the Byzantine Empire a thousand years later.

Right now, the United States is the leader in a world-changing technology called fracking. This technology has allowed the production of natural gas in the U.S. to reach historic levels.

This has driven the price of this clean energy source from $12 to $2.50 Mmbtu.

Underground storage is at record highs, and companies like Chesapeake (CHK) have shut down production. That's because you can't make money from production; no one wants any more natural gas. There is nowhere left to put it.

As you can see by the following chart, the number of drilling rigs in use is dropping to crisis-era lows. And this is happening at a time when unleaded gasoline is selling at $3.50 a gallon. 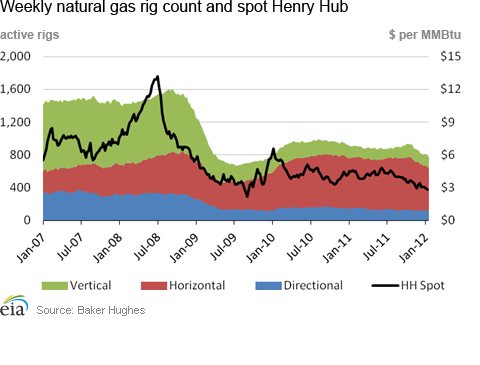 But this is the best news in the world if you are an American.

For those of you who don't know, LNG is NG that is condensed for easy transport on ships. Obviously, this sets up the mother of all arbitrage plays...

There is a scramble to build new LNG terminals, pipelines, and vehicles. The rental price for LNG shipping has tripled in the past year. Shipping companies are in a mad dash to upgrade ships from the 1970s and build new ones.

Heated competition is leading to fights between industry and NIMBYs in places like Oregon and Maryland to build new export terminals.

Companies like Dow and DuPont are resisting exports because they want to ensure low costs in the U.S.

Government leaders have even called for a ban on exports — that's how you know it's real!

But it won't stop cheap energy...

Of the nation’s 11 LNG receiving facilities, nine have asked for permission to be converted to export terminals.

I told you about Chicago Bridge and Iron (CBI), a company that makes LNG infrastructure, back when it was a $8 stock. It is now trading at $44.23 — and hitting new highs.

But the people who produce the infrastructure will make lots of money.

These “pick-and-shovel” makers can't keep up with demand, and their share prices will end up looking like moon shots.

Those who see what is coming and act can and will make money.

You may not end up as rich as Croesus, but it's hard to ignore a good bet.

I am currently writing a report on natural gas infrastructure plays. I hope to have it to you shortly. Stay tuned.