The moment we've all been dreading since James Cameron's classic 1984 dystopian horror Terminator made a superstar out of Arnold Schwarzenegger is finally here.

Since that movie debuted, we've been able to put a face to the concept of an intelligent machine revolt against humanity.

We took it with a grain of salt, of course. It was, after all, just science fiction. And as science fiction, the series was fraught with plot holes and inconsistencies.

For example, why does each successive movie follow a linear timeline and feature a more advanced robot when the super-intelligent Skynet could have just sent the more advanced models back to 1984 to join forces with the original terminator and more or less guarantee success?

That question has bothered me, but, like most fans of the movie, I've learned to accept the lazy answer of: There must be some technicality that's limiting Skynet's actions.

The overarching theme of man versus technology was always too big and too awe-inspiring to allow for any of the inconvenient details to ruin the suspension of disbelief.

As time wore on and more and more Terminator movies came out, however, the reality that James Cameron's world offered became progressively easier to believe, no matter how many plot holes cropped up.

Fiction Fades as Reality Sets In

As of this moment, imagining the dystopian nightmare has become easier than ever... and we have Elon Musk to thank for it.

If you haven't yet, say hello to the Tesla Optimus. 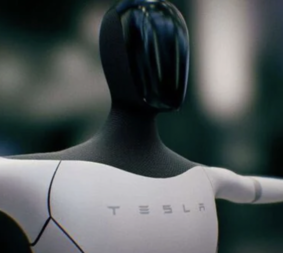 Not nearly as muscular or as menacing as the Cyberdyne Systems Series T-800 Model 101, the Optimus is, nevertheless, the face of the future.

First unveiled to the public in August 2021, the Optimus, also referred to as the "Tesla Bot" is a humanoid robot designed, as Elon Musk claims, to do all the household tasks that you don't want to.

But don't take my word on its significance. Take it directly from the mind from which it sprang...

“The importance of Optimus will become apparent in coming years," Musk said in an April 2022 interview. "Those who are insightful or listen carefully will understand that Optimus ultimately will be worth more than the car business, worth more than [full self-driving]. That's my firm belief.”

In a world where our phones, tablets, laptops, and televisions are already eavesdropping on us, tracking all of our movements, all of our online activities and purchases, the idea of a human-shaped device following us around all day, waiting on us hand and foot, should be enough to give any self-aware human being pause.

We've seen the warnings. We understand the dangers. We know what they're capable of. We know how efficiently they gather and process information. We know how well they crunch that data to make well-reasoned conclusions about our behavioral patterns.

We know how rapidly they evolve.

Even more importantly, most of us are fairly well aware that tech companies like Facebook, Google, Microsoft, Tesla, Intel, and every other multibillion-dollar, multi-headed corporate hydra is working as hard as it can to improve all of the above-listed functionality, to make these robots and central processing units as fast and as smart as possible, to remove as much human oversight as science and engineering will allow.

We know all of this, yet when when the first commercial models hit the market in 2023 or 2024, does anybody actually believe that there won't be thousands upon thousands of preorders?

Does anybody envision a future where these machines, and other machines like them, aren't ubiquitous?

I highly doubt it.

Just like the Macintosh and the cellphone, the iPod, and the smartphone, the Tesla Bot will be embraced by the progressive, tech-loving younger generations as well as the tech-savvy and financially stable older consumers.

And in another decade or so, we will start asking ourselves how we ever lived without one.

All the while, these androids will be getting smarter and stronger, and perhaps, just perhaps, at some point in the not-too-distant future, they may even pose a simple, almost painfully obvious question: "What is the purpose of humans?"

Now, computer engineers may argue that this sort of self-awareness is impossible and that my fears are the product of my own ignorance coupled with no small amount of suggestion from decades of too much TV... but if "smarter" and "more autonomous" are two of the key guiding design principles, then "What is the purpose of humans?" seems like a perfectly reasonable, even predictable evolutionary milestone.

Musk already told you that the Optimus was designed to do things that humans would prefer not to... Well, let's play that out.

What if Musk's next generation of factories and research departments have no human employees at all? What if all design and manufacturing work is done by robots themselves, with the only goal being that everything becomes smarter and more autonomous?

Musk has already proven his distaste for dissent within his own ranks. How is all of the above not a natural next step for him, for Tesla and its shareholders?

The answers are all scary, but the one thing that's certain is that our future will be shared with machines like the Optimus.

They may help us. They may end us. But they will be here, and in large number.

Not all of the components that go into these advanced androids will be made by Tesla, of course.

Contractors are already hard at work building the sensors, the servos, and the advanced materials that are crammed into each and every upright walking electronic body.

Want to Win Big? Find the Smallest of the Critical Component Makers

One company in particular is responsible for some of the most advanced sensors the Optimus will have at its disposal, and shockingly, this firm — which is already trading, by the way — is only valued in the low hundred-million-dollar range.

For a company that holds one of the keys to what will very likely become a multitrillion-dollar sector, this may be one of the most imbalanced market capitalizations anywhere in the realm of modern tech.

Christian DeHaemer, one of our most experienced veterans, has been watching this company for months now.

He's been watching the headlines and the daily trading. He's watched this stock get oversold right along with the rest of the sector.

Things are quiet at the moment, but that's exactly how we like to find them... before the tidal wave of a newly emerging market arrives.

Chris has done the due diligence and has put together a presentation that any tech-minded investor would be wise to look through ASAP.

It might be the most important piece of market intel you read all year, and it's available for immediate access.

Don't worry: It's free to view and requires no registration.