It’s Time to Transfer the Wealth Back

If anyone tries to tell you that the stimulus being pumped into the markets isn’t a transfer of wealth from the bottom to the top, you can tell them right where they can shove that rhetoric.

And, if you need some visuals to help your argument, here’s a chart my esteemed colleague, Christian DeHaemer, shared with me that shows the inequality surging every time the Fed pumps money into the market: 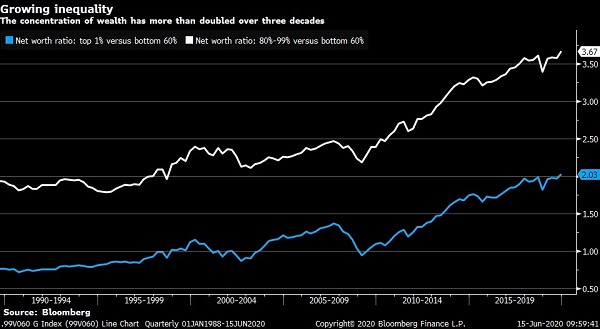 Now, before you go getting all upset because you consider yourself closer to the top than to the bottom, let me make one thing clear...

So, if you’ve got less than one thousand million dollars, don’t get it twisted; you’re part of the bottom, too. And if you’ve got more than that, you can probably stop reading this article.

More Than Half a Trillion

That’s how much collective billionaire wealth has increased in the U.S. since the start of the pandemic and the acceleration of free money for the rich. While 45.5 million Americans were filing for unemployment, the super-wealthy were adding more billions to the outlandish piles of billions they already had.

Larry Ellison saw his wealth grow $10 billion to $69 billion. Bill Gates is worth about $11.5 billion more now than before the pandemic struck. And Mark Zuckerberg is nearly 59% richer now, with a net worth around $86.8 billion.

Meanwhile, $6.5 trillion in household wealth was wiped out and digital unemployment lines got so long that they crashed unemployment insurance application sites nationwide.

But the billionaires were adding more than half a trillion to their purses. That’s more than all the money sent out as one-time stimulus checks to 150 million Americans. And to get the magnitude of the difference, you’ve got to realize there are only 672 billionaires in the U.S.

But 672 people added more to their collective wealth than the total amount sent out to the rest of us in stimulus checks. Think about that. 150 million checks didn’t add up to the amount of money 672 people got.

If that doesn’t throw the stark divisions in our economy and society into sharp relief, I really don’t know what will be able to open your eyes.

I’m that last person who’s going to fault you for getting rich. I’m proud of you for your hard work and effort. But there’s a point where even I’m going to say, “You’ve got enough.”

And, for me, that point came a while ago for most of these billionaires, especially the richest of them all, Jeff Bezos.

I mean, even before the pandemic, Jeff Bezos had more money than anyone could ever put to good use. And since the pandemic started and Americans were ordered into their homes and forced onto Amazon, his wealth has grown even bigger.

In just the past few months, Jeff Bezos added $43.7 billion to his mountain of cash. That makes him worth nearly $157 billion. 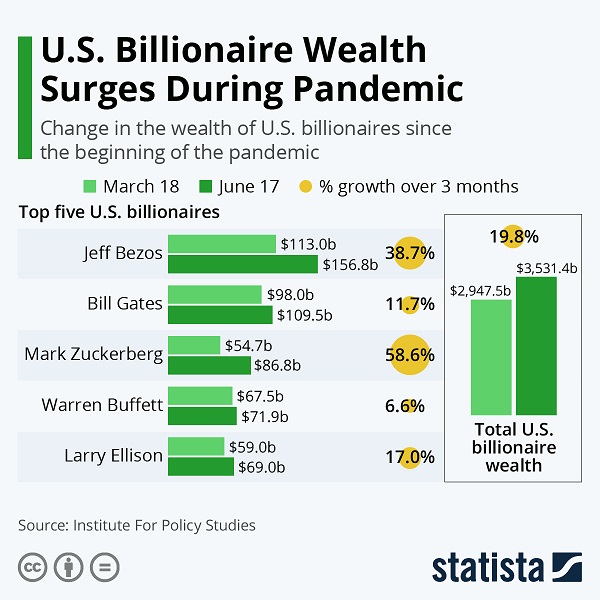 If Jeff Bezos were a country, he’d be the 71st richest country in the world. But there are people in this country who are worried about what they’ll feed their kids tomorrow and if they’ll still have a job or a place to live next month.

I’m all for the free markets and capitalism, but that kind of disconnect in the richest country on Earth isn’t acceptable.

And it’s become blatantly and disappointingly obvious that our politicians care more about making themselves rich and powerful than helping America and the Americans that populate it.

So, I think it’s time we take some action ourselves…

I’m not talking about rioting and looting. That kind of stuff is just plain unacceptable. You don’t show how bad something or someone is by being worse. We all should have learned this as children.

I’m talking about playing the game even better than those billionaires like Jeff Bezos and finding ways to claw some of that fortune back… legally.

That’s what led to my partner, Brit Ryle, and me uncovering what could be the most profitable income stream in the world.

You see, Brit and I are always looking for ways we can get an advantage over the billionaire-elite of this country. And every time we find one, we’re quick to pass it on to the members of our investing community, The Wealth Advisory.

We’ve helped our investors unlock hundreds of millions (if not billions) in profits and steady income payments in the decade-plus since starting the community.

Over the past three years, they’ve collected their share of nearly $33 million in what we lovingly call “Reefer Royalties.” It’s like getting paid every time someone lights up a joint or munches an edible.

Our members have also been able to cash in on a program we dubbed “Internet Royalties.” It’s like getting paid every time someone gets online to watch Netflix, surf the web, or get into an argument on Twitter. Members of TWA have had the chance to share nearly $1 billion of these “royalty” payments.

And most recently, we uncovered a way to take a little of that massive pile of cash Jeff Bezos’ throne rests atop. We call it “Prime Profits” because it’s a way of collecting money practically directly from Amazon’s own bank accounts.

And when I say a little, I’m talking about close to $1.5 BILLION each year.

That’s some serious money, huh? And it’s no joke. Last year, members of our investing community got to split $1.48 billion in “Prime Profit” payouts.

And they’re going to get even more this year — no matter what the markets do.

The payments are calculated every month, and every three months, an extra big one goes out. We’re a few months away from the next massive payment, but we’re getting very close to one of the smaller ones. And if you get on board for the smaller ones, you’ll also be able to collect the larger ones coming later this year.

The next payment is going to be calculated on Monday, June 29. So that means you’ve only got today and a few hours this Monday to get yourself signed up.

Like I said, this is one of the smaller payments. It’ll only be about $18 million. I know, I know. You’re saying, “$18 million isn’t small at all, Jason.” And you’re right. It’s not, unless you’re a guy like Jeff Bezos with more money than God.

And it's also small when you compare it to the one that’ll be going out a few months from now. That one should add up to about $429 million.

And if you get involved now, you’ll have a good three chances to collect on the smaller amounts before you get that big payday a few months down the line.

So, by the time the next massive payout gets calculated, you’ll have already been able to claim your share of $54 million in total payouts. Not a bad deal if you ask me. I’m happy to get paid tens of millions to wait for hundreds of millions.

If that sounds like a good deal to you, too, then click here to get all the details on how you can get your name on the list and start claiming your “Prime Profit” payouts, too.

You can watch the presentation we’ve put together above, or you can access a written report by clicking this link. Either way, I suggest you not delay.

The next payment will be calculated on Monday. And if you’re not on the list, you’re not getting a check.

So, click here now and secure your “Prime Profits” today.