You always remember your first...

The first time you consider that everyone you know is a robot, that is.

When I had this thought, I paused for some time.

“Huh,” I wondered. “Wouldn’t that be something.”

Maybe it was all the realistic video games I was playing as a kid or the philosophical musings of the Greek stoics that I was reading. Whatever it was, technology and reality were starting to blend together.

I’d just moved from a typical Maryland suburb to rural Pennsylvania — a bit secluded but quiet and very peaceful. It gave me time to think, maybe too much.

A few questions kept popping into my head...

“Is my reality the only true reality?”

“Are my friends, family, and pets real or fake?”

It might sound like some drug-induced paranoia, but it’s these deep thought experiments that advance human consciousness.

Little did I know these questions would be echoed in the minds of those running Big Tech companies today, including Elon Musk, who’s been very vocal about this conundrum, saying, “There's a one-in-billions chance that this is base reality.”

Seeing the world through the lens of a simulation can help us understand where technology is headed and where we need to position ourselves to profit the most.

Are You for Real?

In a 2003 paper published in Philosophical Quarterly, Nick Bostrom proposed the simulation hypothesis, which states that one of three possible scenarios exist in the world:

Bostrom argues that a mature human civilization would necessarily have an enormous amount of computing power and use this quantum computing to transcend consciousness and reach an era of civilization he calls “posthuman.”

These posthumans would logically create ancestor simulations, as we already do now with video games like The Sims.

If we accept these three scenarios, then Bostrom’s argument is purely a logical one. If the first scenario is true, we haven’t reached posthumanity and will go extinct. If the second is true, there would have to be some incentive not to run a simulation, which seems highly unlikely given the fact that we’re already doing it today. And if the third scenario is true, then we already live in a simulation.

It’s a bit of a logic game, but the takeaway is that if we are not already living in a computer simulation, the human species is already extinct, so we therefore must be living in a simulation. And the fact that we’re already simulating reality means it’s more likely that another branch of humans or our descendants have already created complex simulations that we’re just now figuring out how to decode.

For instance, we’ve discovered that there’s little difference between artificial and biological processes. The first genome was mapped in 1977, and now we’re able to decipher genome sequences using entire strands of human DNA not unlike computer code.

Again, our own ability to create simulations necessarily means we’re already living in a simulation.

We can, of course, dispute this theory using Occam’s razor, which states that in the absence of hard evidence to the contrary, the simplest explanation is more likely to be correct. Because simulation theory relies on overly complicated realities within realities — and it’s impossible to know what’s outside the simulation — we’re probably just living in boring old base reality.

But whether you believe this theory or not doesn’t really matter. The important thing is our reality looks more and more like a simulation every day. And as long as money’s real, we’ll find the companies that can make you more of it.

Let me show you what I mean...

This Is the Future

Facebook’s name change last year made many people skeptical of the metaverse, and rightfully so. It was clearly a money grab by the greedy and unethical Zuckerberg and co. But if you’re still skeptical of the concept as a whole, take a look at this screenshot from a video taken on a mysterious tech exec's phone... 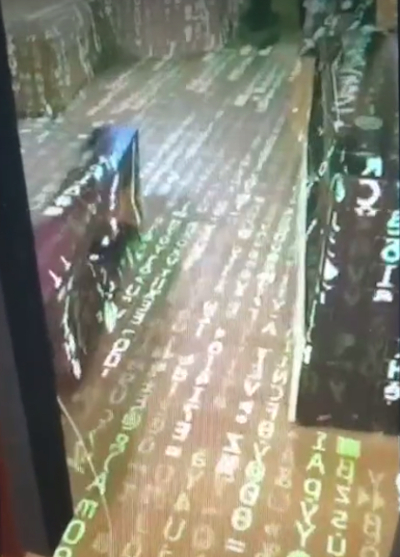 It analyses and decodes the entire world around you, something that can be used in every industry, including video games, architecture, film, aerospace, gambling, and even automobiles.

Even if we don’t live in The Matrix, this is getting pretty darn close.

In fact, many of our daily experiences aren’t even real and are actually based off of LIDAR and artificial intelligence (AI). Our phones map our faces, our daily movements, and even our thoughts and desires. People set up social media accounts run by AI bots that shape our thoughts and actions.

Humans are essentially designing our own reality through technology.

Now, we’re not here to judge whether this is good or bad for society, but it's important to be aware that LIDAR is a strong and growing trend and that it's just in its infancy.

For example, the U.S. military is testing this tech with its bomb disposal robots. And now automakers are scrambling to use it with their driverless cars. Even Elon Musk has strapped it to some of his Teslas...

The company behind it all already has deals with General Motors, Caterpillar, and Nvidia, with nearly 200 projects in its pipeline.

So if you want to get in on the ground floor of the technology that's quite literally taking over the world, make sure to get all the detailed information you need here.