Investing in Wind and Solar Energy

How an Illinois Stripper Made $300k in the Energy Game

April was a stripper from Rockford, IL.

She had long brown hair, a tattoo of an angel on her torso, and a hustle that wouldn’t quit.

Making no apologies for her chosen profession, April wasn’t “working her way through college,” and she didn’t have a nasty heroin addiction to feed. The only addiction she had was money, and she needed it every day.

When I met April, she was 22. She was pulling in about $1,200 a week at a local club and another $5,000 a month from her sugar daddy — a 46-year-old marketing strategist who spent most of his time on the road. From what I understand, the $5,000 a month was basically an insurance policy that kept her away from other men while he was away.

With no college debt or family responsibilities, April was raking it in. So much, in fact, that a mutual friend of ours suggested she contact me to help her invest all that hard-earned cash.

Not Bad for a Stripper from Rockford

I first met April at a coffee shop in North Chicago.

Wearing a pair of red converse, a very short skirt, and a Slayer t-shirt, she didn’t look like someone pulling in $10,000 a month. And certainly no one at that Starbucks was bending over backwards to impress her. But it didn’t take long to realize that April wasn’t just some random stripper. She was an extremely savvy investor.

Turns out April had two other sugar daddies on the side.

One bought her a car, and the other paid her rent and utility bills.

But it doesn’t stop there.

Twenty minutes into our meeting, she showed me her portfolio. That’s right, April owned stocks, and nearly all were paying off handsomely.

At the time she was heavy into oil and gas. She owned some of the biggest names in the fracking game at a time when oil was bouncing back off its recession-time lows.

Just in stocks, April was sitting on about $300,000. Not bad for a stripper from Rockford, IL!

Of course, April didn’t just blindly pick stocks. She had actually become somewhat of an expert on oil and gas investing. Having befriended a field technician at her club, she essentially traded lap dances for intel. And as I soon found out, April actually spent six months in a North Dakota fracking town making more than $10,000 a week as a stripper and an escort.

What April knew about creating wealth would rival a lot of investors I personally know.

With so many oil and gas jobs heading to North Dakota, she knew there was a boom happening there, and she took full advantage.

My colleague Keith Kohl did the same thing.

Monitoring employment data in various oil and gas production sites, Keith could determine where most of the action was going down. And during the fracking boom a few years back, Keith made an absolute fortune.

Of course, the fracking boom isn’t what it used to be, and the money has moved on to new horizons.

If you want to know how well a particular industry is doing, look no further than the employment data.

While jobs in the oil and gas industry have plummeted 26% since 2014, wind and solar jobs have been booming. 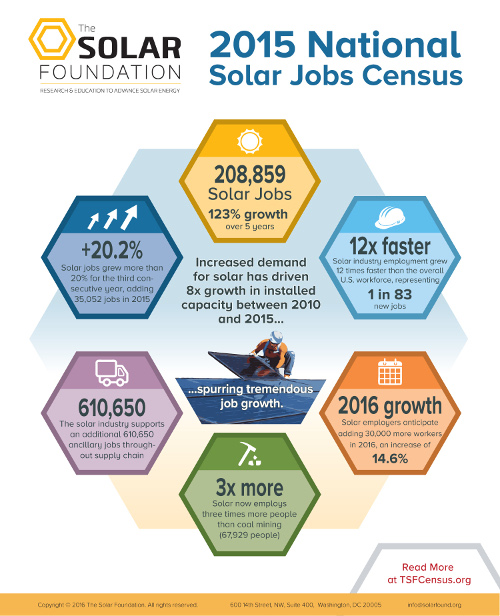 Although solar stocks have had a rough year, I remain bullish on a number of different solar stocks, including Vivint Solar (NYSE: VSLR) and SolarEdge (NASDAQ: SEDG).

While the solar industry continues to crush it, the wind industry is also on a hiring spree.

In fact, right now the fastest-growing job in the U.S. is wind turbine service technician. I’m not making this stuff up, folks.

According to a new study that reviewed occupational data from the Bureau of Labor Statistics, wind turbine service technicians represent the fastest-growing occupation in the U.S.

As reported in 24/7 Wall Street, the number of technicians (windtechs, as they’re called) is projected to more than double between 2014 and 2024.

Advances in wind turbine technology, in conjunction with an effort to increase the use of renewable energy, are largely behind the industry employment boom.

Opportunities for windtechs will not be spread evenly throughout the country. Wind farms are far more common in the Great Plains and the Midwest than they are in other regions. Windtechs can also find jobs in offshore projects as winds are most consistent offshore.

That’s what April told me over dinner many years ago. And she’s right.

April actually got into the wind game a couple of years ago, buying shares of Siemens (OTC: SIEGY), GE (NYSE: GE), and Vestas Wind (OTC: VWDRY). The latter has been one of her biggest scores so far. Check it out... 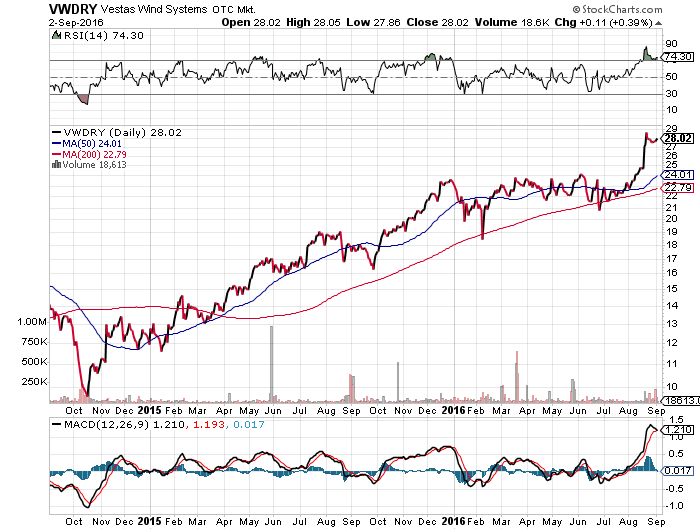 We all should be so smart to invest like a stripper from Rockford, IL.