If you've read anything I've written lately, you know there are many things going on in this world that I'm unhappy with. And judging by your responses, many of you agree.

But frustration doesn't get you anywhere.

In fact, that's the very definition of the word:

frus·trate/ˈfrəstrāt/: 1. To cause to have no effect; 2. to prevent from achieving a goal or gratifying a desire.

It's helpful to be mindful of all the bad out there — but you'll miss many opportunities if that's all you pay attention to.

For example, if all you do is own gold, you're flat for the past year.

An investment in Ford (which I recommended months ago to my Early Advantage readers) would have you UP 14% in the same time:

Of course, you would have had to recognize and accept that the U.S. auto sector wasn't all doom and gloom. Sadly, many people couldn't escape their internal negativity to do so.

Right now, the same thing is happening in housing: Prices have risen for months on end.

Yet I still hear tons of people refusing to accept facts.

For two months I've been telling you to buy a house either to live in, rent, or resell.

As usual, I was months ahead of the mainstream. In my 2013 Market Outlook last month, I told you the automotive and housing sectors would continue their strong showings, thanks to continued low interest rates.

I'm already being proven correct. Here's what USA Today had to say about housing this week:

Six years since the start of the greatest housing collapse since the Great Depression, one doesn't have to look very far to see signs of a recovery. Nationally, home prices are rising after more than a 30% drop since mid-2006.

Foreclosures have slowed in most of the country after having decimated hundreds of U.S. cities. Rather than being a drag on the U.S. economy, housing is now seen as a contributor to growth.

On Tuesday, the S&P/Case-Shiller home price index reported third quarter prices were up 3.6% from a year ago, and September's 20-City Index reached its highest level in two years.

There's still a long way to go — which makes now a great time to buy — but the data at this point is undeniable:

Robert Shiller, who lends his name to the closely-watched index, has pegged now as the time to buy, saying: “It's very affordable.”

Indeed, it's affordable in more ways than one. And with much upside to come, I think buying housing and land is one of the best investments you can make right now.

As the housing market collapsed in 2006, Americans were spending 24% of their gross monthly income on mortgages. Today that's down to 13%.

The combination of affordability and rising prices has created what Schwab Chief Investment Strategist Liz Ann Sonders calls an “inflection point,” where the market stops going down and starts going up.

As has become standard these days, the fast-paced algorithms are already buying up this turnaround. Lennar (NYSE: LEN), PulteGroup (NYSE: PHM), KB Home (NYSE: KB), and Hovnanian (NYSE: HOV) have risen as much as 300% in the past year.

Here's what those charts look like next to the yellow metal everyone has been clamoring about:

You could've made triple your money accepting the consequences of Bernanke's printing instead of protecting yourself from it.

According to data from Moody's, Equifax, the National Association of Realtors, and the Census, median home prices are expected to rise 15% in the next three years, from $178,000 to $205,000: 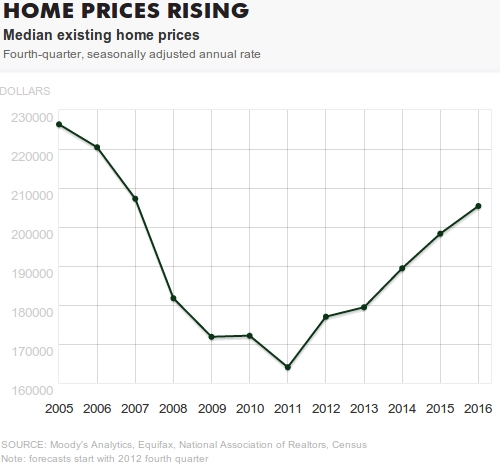 A 15% gain is good. But that still requires you to shell out $100,000 or more to buy a house. Not everyone has — or is prepared to spend — that much money for an investment.

Seeing this turnaround coming, I found a way to buy homes for as little as $1,000 using a special government program.

At that price, you have tens of thousands of dollars (or more) in your pocket the minute you buy the house. Then you can rent it for continuous income, or sell it to pocket the difference.

I've already shown hundreds of people how to do this.

Why shouldn't you be next?