How to Become a Billionaire

Did you know that there is a record number of billionaires in the world right now?

And that their combined wealth is also a record?

Well if you didn’t, now you do.

There are an estimated 2,755 billionaires in the world worth a combined $13.1 TRILLION!

But as impressive as those numbers are, this one is even more so...

That means they weren’t born with a silver spoon sticking out of their you-know-what (sorry if that’s a sensitive subject for Prince William).

No, the vast majority of today’s billionaires were born to working-class or, at best, middle-class families.

But there is one thing that ties them all together, the one thing all those billionaires share…

The first three founded and invested in private companies to make themselves rich.

The fourth bought a company and used it to invest in others to score his billions.

But the thing is, unless you were already rich (like Buffett was when he bought Berkshire) or you were the founder of the company (like Bezos, Musk, and Zuck), it’s always been nearly impossible for regular people to invest in private companies.

In fact, there were rules that said you couldn’t invest in a private company unless you were an “accredited investor,” which is fancy finance-speak for “already rich.”

But private investments have outperformed public ones in just about every market cycle we’ve ever seen.

I’m talking about major outperformance, too... 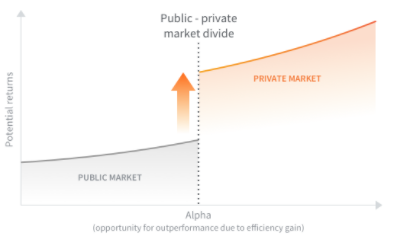 But that all changed recently with the introduction of a new bill in Congress.

Now the markets that created all those billionaires are open to investors like you.

And now couldn’t be a better time to get involved in those private markets.

They’re insulated from the wild swings of public stocks…

And historically, after a market crash and recession, there’s a flurry of new IPOs as those private companies make their market debut and give their funders a profitable exit.

That’s the biggest reason I’m so adamant everyone get a piece of this market right now.

People who invest in private companies this year and next are setting themselves up to reap the BIGGEST rewards when the markets turn around and those companies go public.

Investors who get in today are the ones with the biggest potential for massive gains when their companies go through an IPO after the market turns positive again.

So while it might mean you have to wait for a year to collect your winnings, it’s historically a time when the biggest winnings are made.

But I get it. You’re probably a little hesitant to invest in a market you know very little about.

And who could blame you… for not knowing about it or being concerned about investing?

I mean, you’ve been forcibly locked out of it by design (and by the super-wealthy who use it) for nearly 100 years.

And after watching scam after scam blow up in the public markets, it’s got to be a little scary investing in even more opaque ones.

And that’s why I’m here. I want to ease your concerns.

And I plan to do that by inviting you to join me and my community of pre-IPO investors.

You see, I’ve been investing in this market myself for years.

And I’ve been helping others navigate it for nearly as long.

We’ve seen 10 of our investments increase in value (one of them has already shot up by 600%).

We’ve got four successful exits under our belts: 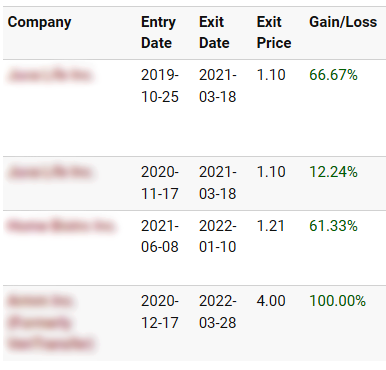 And we just invested in two companies that I’m convinced are going to be MASSIVE winners.

I want you to get a chance at the kinds of gains that turned a geek in his garage into Jeff Bezos.

So I’ve put all the details on those two new investments into a special report I want to send directly to you.

All I ask is that you watch this presentation I’ve prepared about the market, the opportunities waiting for you, and the private companies I’m convinced are going to mint another new generation of billionaires.

Then I’ll send you all the details on how you can get invested and start building your private fortune today.