How Putin's Bringing the War to You

Earlier this week, former Russian president and eternal Putin finger puppet, Security Council Deputy Chairman Dmitry Medvedev, waged his own armed assault — this one on the digital battlefield — in response to threats made by French Finance Minister Bruno Le Maire to "bring about the collapse of the Russian economy."

"Today, some French minister has said that they declared an economic war on Russia. Watch your tongue, gentlemen! And don’t forget that in human history, economic wars quite often turned into real ones," Medvedev tweeted. 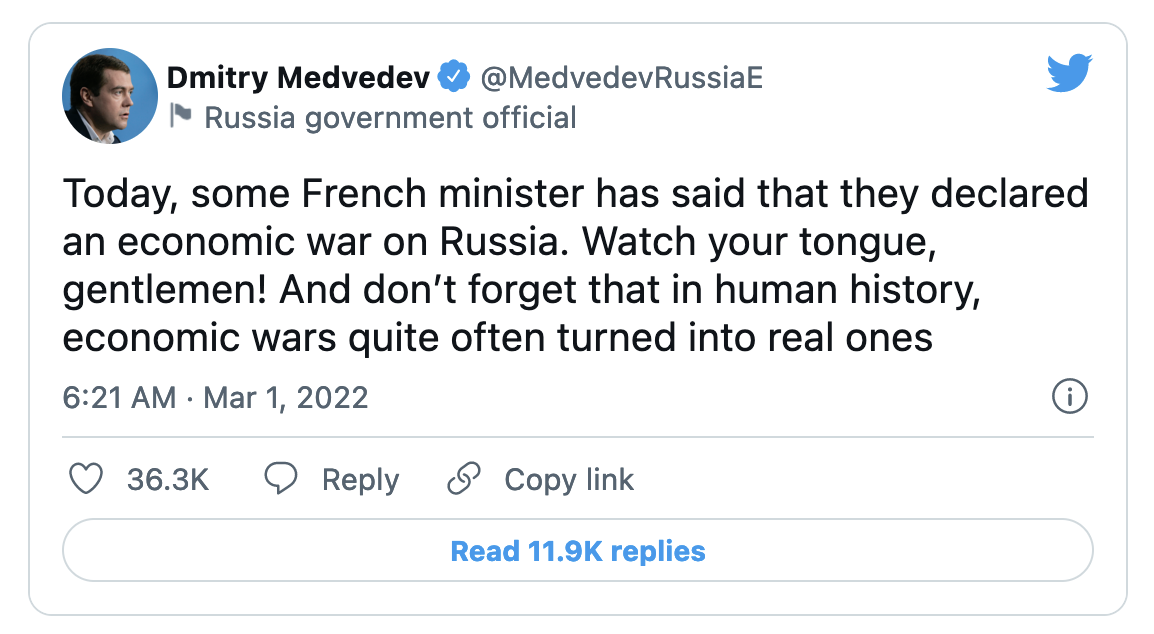 Words to live by, to be sure, as it was precisely sanctions such as these, and the humiliations that followed, that helped catapult Hitler into power in the early 1930s.

What Medvedev's message fails to consider, or perhaps just conveniently ignores, is that war has already started and the Hitler in this situation has been ruling over Russia (either directly or from behind the scenes, as he did during Medvedev's smokescreen of a presidency) for going on 23 years.

Omitting major, substantive details in order to completely mislead an audience is a time-honored tradition in Russia going all the way back to the times of the czars.

But that doesn't mean the entire message should be ignored.

Because another time-honored Russian tradition is making good on threats, and though the Russian military may not pose any direct threats to us short of an all-out ballistic missile exchange, there is one thing they can and likely will do — cut off their oil exports.

Russia is second only to the United States in oil production, cranking out 10.8 million barrels per day.

Of those nearly 11 million barrels, the U.S. imports around only about 90,000, making Russia the U.S.'s No. 9 most import source of foreign oil as of last December.

All of this may not sound like a completely debilitating strike on our economy, but analysts have already predicted $150/barrel oil if such a measure should come to pass, meaning that paying $5, $6, even $7 at the pump in places like California and Hawaii could easily be in our near future.

Again, compared with the horrors of war or even the horrors of losing access to 40% of their natural gas supply — as Western Europe may well experience in the coming weeks — this may all seem tolerable.

If only Russia and her allies had just fossil fuel exports to threaten us with.

The reality is the longer this goes on, the worse the situation becomes for all of us, not just the now heavily sanctioned Russian economy.

A recent report by CBS news states that all the pieces are in place for a Soviet-Afghanistan-style standoff, meaning that a decade of active armed exchanges could be in the offing.

Such a war would certainly shift the balance of geopolitics, ultimately ending with multi-decade cold war between Russia and its partner states, which include China and Iran.

If that scenario were to play out, the end of the $3/gallon gas at the pump would be the least of our worries.

Between Russia and China, more than half of the world's lithium reserves will be in the hands of our rivals by the end of the decade.

Without this lithium, which lies at the heart of all of our wireless devices, electric cars, and distributed power storage systems — the kind necessary to house overflow power production — no war would be necessary for the likes of Putin and Chinese Communist Party frontman President Xi Jinping to take control of the new world order.

World War III would be averted entirely, as we'd skip directly to our final and ultimate defeat.

Outrunning the Next Energy Crisis

Our government knows this. Our industry insiders and specialists know this.

For years, engineers have been working on a way to get around this debilitating dependence on our enemies.

Quite recently, an Australian company may have finally cracked the code.

It came up with a new battery that not omits not only lithium, but all rare earth elements — another Chinese monopoly in the making — from its cell construction.

The new batteries use aluminum and a new space-age material to create a rechargeable battery with truly world-changing performance characteristics.

This battery, installed in your smartphone, would charge to full capacity in seconds... Installed in a Tesla Model S, it would achieve a long-thought impossible performance milestone for EVs — zero-to-capacity charging completed faster than a gas-driven car can be refueled.

Most importantly, however, is that the space-age material used alongside aluminum in these batteries can be created artificially, anywhere where natural gas is available.

A Nobel Prize-Winning Discovery... A Shift in the Balance of Global Power

That means that the essential raw materials needed to produce these batteries can never be monopolized by tyrannical governments in Russia, in China, or anywhere else on Earth.

Not a bad deal, right?

Well, that's what I thought last month, especially for a company that today is valued at less than $250 million (USD).

Today, I realize more and more that this company isn't just a good deal for an investor; it may just be essential if we want to continue our way of life.

The company that owns the patents to this new battery is headquartered in Queensland, Australia, but its stock trades right here in North America.

Putin's attack on Ukraine has sent all of the markets into turmoil, and this one is no exception.

His rampage has opened plenty of excellent buy-in windows, which makes today maybe the best time ever to see what this company has to offer.

I recently published a presentation for my readers detailing everything from the nature of this high-tech new material, to the two men who won a Nobel Prize for first isolating it back in 2010, to the company and the stock itself.

I know it's hard to think about stocks and investing at a time like this, but you and I already know that fortunes are made from every major geopolitical event... The bigger and more dramatic, the bigger the opportunities.

Don't sit this one out. It's going to happen with or without you.