Housing Stocks are on Fire

Over the weekend, my wife and I were driving home from our beach house in Delaware.

While crossing the Chesapeake Bay Bridge, I heard a commercial on the radio that tripped my contrarian alarms...

The guy in the commercial was saying, “Baltimore is the perfect city to flip houses. Let me show you how in my free workshop this Saturday... blah blah blah.” We heard the commercial twice more before we pulled into our driveway.

In advertising, when you see or hear an ad spot like that several times, it means it’s working. People are buying what the commercial is selling. Just think about how many times you’ve seen the infomercials for P90X and ShamWow.

You can use this knowledge to your advantage.

One of the golden rules in investing is that when you start to hear mainstream outlets advertising a get-rich-quick program or a stock to the unwashed masses, it’s time to take your profits.

Look at this way: How many “We Buy Gold” billboards or shopping mall kiosks did you see in 2000? I’d venture to say you saw none. I surely didn’t.

I started to see them around 2005 or so, and now they’re all over the place.

The same thing could be happening with housing — again.

I’m hearing stories that remind me of 2003-2005, the glory years of the housing bull market.

I have a friend who lives in Bethesda, Maryland, a prosperous city on the outskirts of Washington, D.C.

Last week he told me homes coming on the market in Bethesda are immediately getting multiple bids and offers higher than the asking price. Sound familiar?

Now, that’s not to say housing is in a bubble. Not yet. These things take years to form. And this one could run for a while.

If you recall, I listed homebuilders as one of my Top 10 Investments for 2013.

I first wrote about this in July 2012. Here’s what I said in my piece that was published on July 3 in Wealth Daily:

Do you want to hear some good news for a change? Of course you do. 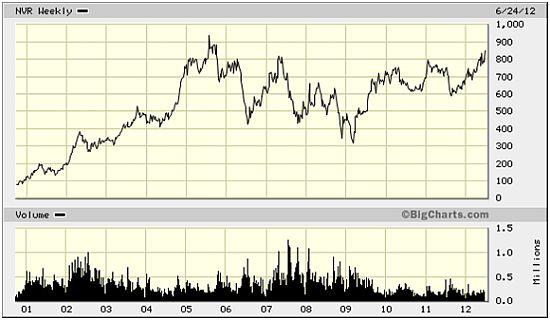 It sits at a 52-week high — and is at its highest level since 2005. In fact, a majority of the stocks in this sector are rallying, crushing the broader market.

So take a guess which stock this is...

Dear reader, housing in the United States has bottomed.

Want to hear something that’ll blow your mind?

NVR is trading at an all-time record high!

It’s trading higher than it did during the “mother of all housing bull markets.”

And the rest of the industry is going great guns, too.

Here’s the tale of the tape:

Those are great gains, for sure.

But if you really want to see why investors are talking up housing again, look at Zillow and Trulia, which operate websites to advertise real estate for sale: Zillow and Trulia are up 98% and 81%, respectively. And that's since January 2, 2013.

That, my friends, is a raging bull market.