Have you locked in your mortgage rate? You might want to consider doing so – and fast. The tide may have begun turning on borrowing rates. 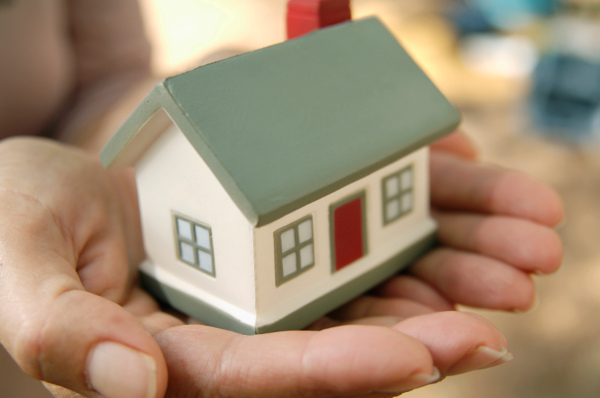 After more than 4 years of ultra-low mortgage rates have reinvigorated home buying, banks are realizing they can charge a little more interest without killing the demand for mortgages.

But is the economy strong enough to handle higher mortgage rates, or will rates soon fall once again? Will you buy and lock in now or gamble on lower rates to come?

The interest rate saga begins in mid-2008, in the blazing fire of the largest financial meltdown in the U.S. since the Great Depression. Banks were on the verge of bankruptcy and were unwilling (unable, really) to take on more debt. As mortgages failed, new lending clamped down, and the housing market caved in from the lack of buying.

The U.S. Federal Reserve then rode to the rescue in November 2008, with the start of a quantitative easing program using taxpayer dollars to buy mortgages from banks and mortgage providers, therein transferring mortgage risk off of them and onto the federal government.

That stimulating mortgage buying program has evolved through 3 iterations to its present form, which consists mainly of near-zero interest rates, $40 billion in mortgage purchases per month, and $45 billion in bond purchases per month. The result has been unbelievably low mortgage rates and bond yields, with the benchmark U.S. 10-year Treasury note’s yield dropping from 4% in 2008 to under 2% by 2013.

Despite abounding criticism, the mortgage-buying stimulus program has indeed reaped some fantastic rewards in spurring home buying to levels not seen in decades. The demand for homes has not only bought up the glut of excess housing left vacant from mortgage foreclosures, but it has also reinvigorated the construction of new homes, lifting housing-related stocks to the sky.

The graph below shows how the average 30-year fixed mortgage rate in the U.S. has moved tremendously from pre-crisis and pre-stimulus levels down to an all-time low of about 3.3% by the end of 2012. 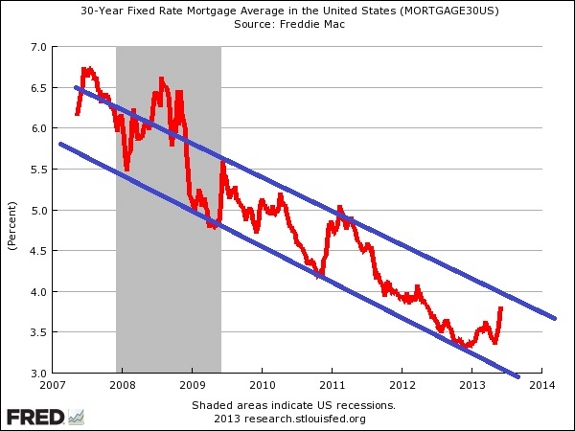 Since then, however, the trend has been reversing upward, reaching the present 3.9% area and looking strong enough to continue further. Fannie Mae chief economist Doug Duncan predicted to CNNMoney, “It's unlikely that rates will ever be that low again.”

What’s responsible for this upward move since late 2012 is the anticipation of a reduction of Federal Reserve mortgage and bond buying. The rise has recently accelerated all the more on rumors that tapering may begin even earlier than expected.

“Up until recently, expectations were that the Fed would begin to taper purchases of mortgage-backed securities (MBS) and Treasury bonds late in 2013, but that timeframe appears to have moved to September, possibly sooner,” Keith Gumbinger, vice president of HSH.com, informed CNNMoney.

Once government purchases begin to slow and the government stops taking so many new mortgages onto its books, it would be up to the banks and investment community to step up and secure those home loans. They will understandably want to be compensated for reassuming that extra risk.

And that risk is likely to continue rising as the housing market continues to recover. Rising home prices mean larger mortgages. However, household incomes have not risen by a proportionate amount. So if home prices continue rising quickly while wages rise much more slowly, each new mortgage will carry greater and greater risk, prompting banks, mortgage providers, and investors to demand higher interest payments.

How much higher can rates go? “The 30-year [mortgage rate] hit a 37-year low in 2003 at 5.23%,” Gumbinger informed CNNMoney. “That was the previous low-watermark prior to this financial crisis and it's likely we will move closer to that mark as we grind forward.”

Today’s rates at just under 4%, then, may provoke a home-rush, as John Burns, CEO of John Burns Real Estate Consulting, noted to USA Today, “When interest rates go up, it scares people and they get off the fence because they don't want to miss the great interest rates.”

Not Out of the Woods Yet

However, a strikingly noticeable technical trend has been keeping the 30-year mortgage rate confined within a descending channel, as indicated in blue in the above graph. Twice before – in early 2009 and in late 2010 – mortgage rates resumed their downward trajectory upon hitting the upper band of the channel. Will rates bounce off that upper wall this time too and retrace back down as before?

If upcoming economic data throughout this summer proves weaker than anticipated, it is very likely that the Fed will not begin tapering mortgage and bond purchases in 2013 at all. This by itself could cause the interest rate to fall yet again toward the lower band of the channel.

What analysts are now keeping an eye on are the jobs numbers, starting with today’s. It has been accepted as a rule of thumb that an average of 200,000 new jobs a month needs to be created consistently for some 4 to 6 months before the Fed even considers changing its policies. May’s non-farm payroll numbers already fell short of that requirement by some 25,000 jobs, at around 175,000.

Slowing growth in other parts of the world are continuing to crimp the U.S. economy’s expansion, with the latest GDP number last week showing a still sluggish recovery at an annualized 2.4% in Q1 versus an expected 2.5%.

Wages are still low, and working hours have still not recovered. Mortgage interest rates may very well reach a wall where home buyers simply cannot afford rates higher than 4%. Pushing rates above that may have the negative side-effect of curbing the housing recovery, slowing construction, and undoing much of the advancement of the last year or two.

Even so, after assessing one’s circumstances, factoring in job stability and affordable mortgage payments, now may still be the best time in recent U.S. history to buy a home.

Even if rates do hit a wall at 4% and fall back down due to poor economic data this summer, how much lower will they really go? Back to 3% perhaps?

Waiting an extra 6 months may save you that 1% if the economy sours. But if the numbers are strong and the Fed does indeed begin tapering this year, waiting to buy a home could cost you an extra 1 to 2% if rates rise to the pre-crisis 5 to 6% average.

What is more, think of all the rent money saved. Rent is tossed out the window, never to be seen again, while mortgage payments build up equity than can be reused in future years to start a business or buy a bigger home.

So now may very well be as good a time as any to take on a mortgage – as long as you lock it in. Rates will surely be much, much higher in just 5 or 10 years’ time, let alone by the end of a 30-year mortgage. Even if locking in today causes you to miss that possible 1% move lower, over the life of your mortgage, the savings in rent and in interest when rates climb will more than compensate you for that lost single percent.