Sandy Hook was a tragedy... 28 people died, the majority of them children. (The media have adopted 26, but I'm pretty sure the shooter and his mother were people.)

Yes, it should make any human quiver.

But 28 deaths is actually only one-third of the 85 gun deaths that occur each and every day in America. Even more die daily from auto accidents.

Yet because it was a mass shooting, it's an outlier. It generates a more visceral reaction. More people take notice.

What really makes me angry is the response of our politicians. 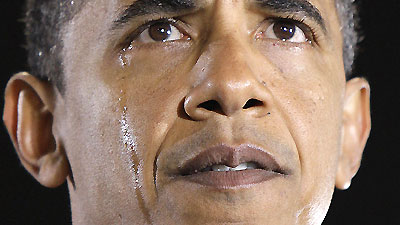 Obama stood up there and shed a tear for the loss of innocent life like the collateral damage of his unconstitutional drone strikes haven't killed just as many. (The Bureau of Investigative Journalism says drone strikes killed 2,562 – 3,325 people in Pakistan, of whom 474 – 881 were civilians, including 176 children.)

Obama's committed over eight Sandy Hooks. And that's only the beginning of the hypocrisy.

U.S. soldiers in Iraq have reported being forced to sing the following cadence during training:

The U.S. military, which is controlled by the President and Congress, sings songs about mass-murdering children while playing in a park.

So any emotion they've shown over the incident in Connecticut can be classified as nothing more than crocodile tears.

And this still isn't the worst part...

The worst part is that crimes that affect many more people — hundreds of millions or billions, in fact — are systematically conducted by some of the largest companies in the world... and are ignored or downplayed when they're discovered.

The very week before the shooting, the Obama administration told us HSBC would not be prosecuted for aiding Al Qaeda, Mexican drug cartels, and Iran.

We'll teach our soldiers to shoot their children in a park, but when they catch a multi-billion-dollar bank doing the same thing, your leaders decide it would be bad for business to prosecute them.

Give me a break.

The Department of Justice has indicted dozens of individual citizens for providing the slightest aid to so-called terrorist groups. When 14 U.S. citizens were indicted in 2010 for “providing money, personnel, and services” to a Somali terror group, Attorney General Eric Holder (the same Attorney General who gave automatic assault weapons to Mexican drug cartels that were then used to take innocent lives) said:

The indictments unsealed today shed further light on a deadly pipeline that has routed funding and fighters to the al-Shabaab terror organization from cities across the United States.

But when HSBC was caught doing the same exact thing in a more coordinated and much larger fashion, the same department decided against indicting because it could jeopardize the bank's business.

So for the record, when a single individual commits an act like this it is a tragedy of the highest order. We should condemn it, offer our thoughts and prayers, and seek new legislation to prevent it from ever happening again...

But when it's done systematically by people with corner offices and who donate heavily to political campaigns, we'll just look the other way.

It's a double-standard. It's disgusting. And it makes my face turn red when I have to watch the president stand up at the podium and say:

We can't tolerate this anymore. These tragedies must end. And to end them, we must change. We can't accept events like this as routine. Are we really prepared to say that we're powerless in the face of such carnage, that the politics are too hard?

He was talking, of course, about taking your guns. The politics aren't too hard for that. Gun rights groups have only given about $4 million in contributions to political candidates this year. That's chump change.

Banks have given $44 million.

So because one gunman commits an atrocity, the government wants to attack the rights of millions of law-abiding citizens.

I must admit, it makes for a nice distraction from not going after the people in the highest levels of government who are covering up actual crimes...

Because in the chaos after the shooting, we also learned that Timothy Geithner had known about the rigging of LIBOR since 2008. As the Financial Times reported on Tuesday, while the country was still focused on Newtown:

The Federal Reserve Bank of New York was warned as early as mid-2008 that banks may have been misreporting their LIBOR borrowing rate to aid their own trading positions, much earlier than previously known.

Tim Geithner, then president of the New York Fed and now US Treasury Secretary, was told by a senior colleague in a May 2008 email of her concerns about banks' deliberate misreporting.

But you don't see words like "atrocity" or "inhumane" or "heinous" used about events like these — even though they steals billions of dollars in wealth from millions of ordinary people and serve to shackle their upward mobility. Instead, they're politely labeled “deliberate misreporting.”

As Gerald Celente noted this week, that's bullshit: “Deliberate misreporting? How about thievery? How about high crimes? How about screwing the entire world by rigging the interest rate game?”

You can't see billions of dollars being systematically stolen from you in digital fashion, but you can see bodies on the ground...

What HSBC, UBS, and all the rest do to you and millions of others on a daily basis equals any shooting. Those in power know it — and condone it.

Are we really prepared to say that we're powerless in the face of such carnage, that the politics are "too hard"?