Written by Christian DeHaemer
Posted May 21, 2013

If you were one of the lucky few who started investing in 2009, you've been killing it.

Heck, if you're one of the people who started investing at the top in 2008 and held through the bad times, you are now back in the green.

If you have been investing like mutual fund literature suggests, and have been putting money in each and every month in a retirement account, you are, again, doing great...

Not that I would suggest mutual funds, when you can buy an ETF and save money.

There is absolutely no reason to pay 2% of your principle each and every year for a managed fund, especially when most of the fund managers can't beat the market.

Of course, most people don't do the smart thing.

Most people panic and sell when the market gets whacked like it did in 2008-2009.

The smart investor goes against what most people do and does the exact opposite.

This is why contrarian investors like Warren Buffett were making large bets on stocks when they were at the bottom five years ago. As you remember, Buffett bought Bank of America at $7 and GE at around $8. Today Bank of America is at $13.50 and GE is at $23.

Buy When No One Wants It

Buffett has built Berkshire Hathaway Inc. (NYSE: BRK-A) into a $169,655-a-share fund by picking up blue chip companies that have fallen out of favor with most investors.

Warren looks five to ten years down the road and buys companies that he knows will still be making money.

Well, if you can believe what he said on Bloomberg TV yesterday, he's not playing it safe with bonds.

This May is shaping up to be a record month for corporate bond sales. Apple alone is putting out $17 billion in paper. PetroBrasil is offering up $11 billion.

What Warren doesn't like is that these bonds are paying a low 3.35% on average (for comparison, back in 2008 the average corporate bond paid 11%).

On Monday, the Oracle of Omaha was on the TV telling all who would listen that bonds are no good, including Apple's. He said, “We’re not buying corporate bonds of any kind now. Not at those yields.”

Not at Those Yields

So, if the world's greatest investor tells you to stay away from bonds, where do you put your money?

The obvious answer is in equities.

One look at SEC documents will tell you where Warren put his...

In the first quarter of 2013, Warren added to his positions in three companies and dropped two others. His buys were Wells Fargo, IBM, and Wal-Mart (NYSE: WMT).  He sold his agricultural stock Archer Daniels Midland (NYSE:ADM) and defense company General Dynamics (NYSE: GD).

This makes sense because banking is undervalued, IBM is ruling the cloud, and Wal-Mart just broke out of a 12-year consolidation pattern.

In fact, Wal-Mart is hitting all-time highs and could double from here.

The last time Wal-Mart broke out of a multi-year consolidation pattern was 1997. It went from $15 a share to $70 a share in three years. 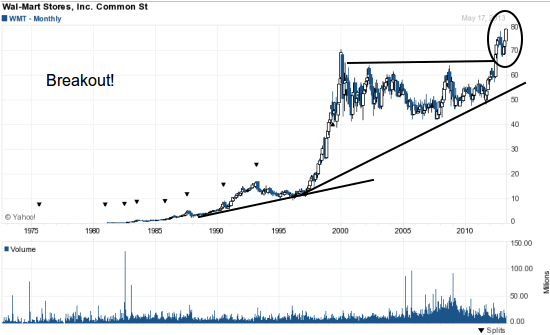 Berkshire also added another stock that you've probably never heard of. It's a company I first recommended when it was $12 a share more than five years ago. More recently, I bought it last year... and am now sitting on 52.43% gains.

I know why Buffett loves this stock. It's the same reason I do: This company will benefit from the continued growth in the natural gas trade.