From the World’s Fastest Airplane… Into Your Car

Ask any 8-year-old what the fastest plane ever was and, from those who respond with anything more than a shrug, you'll get the same answer 9 times out of 10: the SR-71 Blackbird.

The legendary Cold War-era Air Force spy plane flew so high and so fast that no missile could ever catch it… and rival interceptors rarely got close enough for their pilots to even catch a glimpse.

Those few who did would have been rewarded with a firsthand look at this unforgettable shape: 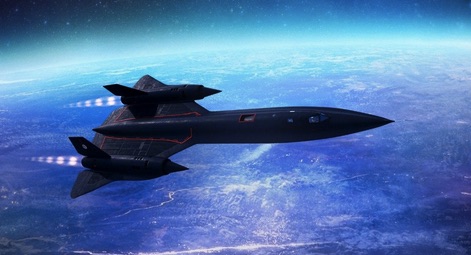 At the age of 8, I got to see one sitting on the tarmac at Andrews Airforce Base and thought it was just about the greatest thing ever. And yes, had somebody asked me what the fastest plane ever was, I would have been bursting at the seams to be the first to say it.

And, like everyone else, I would have been wrong.

While the SR-71 did fly at an incredible speed of just under 2,200 mph (the speed of a rifle bullet as it leaves the muzzle) and still holds the coast-to-coast flight record of one hour and four minutes, it tops out at less than half the speed of the plane occupying the top spot.

Excluding the space shuttle, which is either a rocket or a glider depending on which stage of flight it's in, history's fastest powered airplane ever is North American Aviation's experimental X-15, operated by both the Air Force and NASA.

Had the beautiful SR-71 been flying alongside the stumpy, homely little X-15 on that day, it would have been overtaken at a speed differential of more than 2,300 mph.

During the high-altitude flights of the early '60s, the X-15 flew so high that five of the Air Force pilots who participated in testing were awarded astronaut wings.

Much about the machine is unique and amazing but perhaps nothing more so than the fuel that took it to those heights and speeds.

Sounds like one of those too-good-to-be-true stories, but it's true. Ammonia fuel is so clean that its exhaust can be cooled and safely sipped from a glass... and yet still deliver enough power to bring airplanes to the edge of space.

So what's the catch? If it's so great, why is gasoline, not ammonia, our primary fuel for the consumer and commercial markets?

There is now a new technology on the radar that's about to change the paradigm.

In five–10 years, your local filling station could be dispensing this stuff right alongside gasoline. In another five–10 years, it could dispense only this stuff, with gas and diesel a distant memory.

Right now, when the wind is blowing and the sun is shining but nobody is home running their washing machines, lithium-ion batteries are used to soak up excess kilowatts. In the future, ammonia production facilities could be adapted to produce and store ammonia to either sell or transform back into electricity during peak-demand hours by using that ammonia to run a carbon-free generator.

Trading Electrons for Fuel and Back Again

The potential is so great it's hard to enumerate... but it's safe to say that by the middle of the century, we could easily be running on an ammonia-dependent economy.

In other words, it's an embryo — a tiny speck compared to the giant market.

And from the looks of things, that's exactly what it intends to do.

The stock price has been rising steadily since the company changed its name and ticker, almost doubling in price.

I think it's still got a zero or two to add before it's all over, and the way things are moving, we might see that come to pass sooner than I thought.

So I urge you to check out this presentation ASAP. Who knows where shares could be trading tomorrow?