The Trees Will Turn Green This Fall in Four U.S. States

In case you missed all the signs on people’s front yards, it’s campaign season in America.

The primaries are drawing to a close, and soon we’ll be on to the general elections in November.

For many of us, it’ll just be another day. Just another choice of the lesser evil.

But voters in four states will get the chance to add their states’ names to the steadily growing list of cannabis legalization...

And it’s going to spark another massive rally in marijuana stocks when they do.

I’ll get to the states in a bit, but first, let’s just see what kinds of profits have come as new states vote to legalize.

Every time news breaks that a state has approved medical or recreational marijuana use, certain stocks in the industry shoot through the roof. In 2014, just news of states putting it on the ballot drove prices sky high... 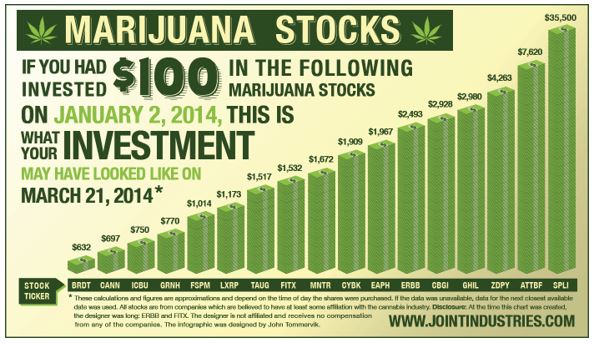 In June of that year, Canopy Growth Corporation (TSX: WEED), currently the largest public cannabis company, cost less than $3 per share. By the time the results were released, shares had shot through $12.

And there were signs all year that the ballots would fall in favor of legalization. Yet investors still stayed on the sidelines. They waited until it was a sure thing before they bought.

And they drove prices sky high. But the profits all went to those of us who’d been invested for months, even years. We cashed in on the news and on the buying frenzy that followed it.

Or how about just last year, when Indiana legalized some forms of cannabis oil, West Virginia legalized medical use, and New Hampshire decriminalized the plant?

Combined with news of Canada’s potential legalization, that drove Canopy’s shares even higher, from the $12 they reached in 2016 all the way up above $40 by the start of 2018.

That's another 233% gain from news of voters approving legalization.

But again, that was only a profit if you were already invested. Sure, you’d have made some money on the way up. But you wouldn’t have made the kinds of gains you want to brag about at a dinner party.

So trust me when I tell you that the people wallowing in pot profits this November are going to be the ones who listen to me and get invested now.

Now, let’s get to those states and see what kind of cannabis legislation they’ll be voting “aye” on...

Growing Grass in the Peace Garden

Along with the Roughrider State, North Dakota is also known as the Peace Garden.

And in a couple of months, North Dakotans will head to the polls to decide if adults can use the cannabis they’re growing in that garden recreationally.

If this measure passes, it’ll be the fastest transition from approving medical cannabis to legalizing recreational adult use. And it’ll be a massive sign that cannabis legalization is reaching full speed.

And it’s very likely North Dakota will vote yes. Back in 2016, medical marijuana was approved with a whopping 64% of the popular vote in support.

There hasn’t been a ton of polling done on the coming vote, but a survey conducted this June found that 46% were in favor of legalization, 39% were against it, and 15% were still undecided.

Nationally, however, support for legalization has reached 64%. So there’s more than a chance this initiative will pass come November.

Whether you’re in the mitten or you’re a Yooper, come November, you’ll be bundling up to head out and vote to legalize recreational adult use of cannabis in Michigan.

In a state where medical marijuana is already a bustling industry, having been approved back in 2008, recreational use should pass with a solid majority of voters in support.

The government in Michigan has been extremely forward thinking and proactive in regulating the medical industry to protect patients and the public.

And polls show 61% of the population in support of the initiative.

I don’t know how the Lion of the Lord would feel about it. But this November, voters in Utah will head to the booths to decide whether medical marijuana has a place in Deseret.

Thirty states have already approved medical use. And initiatives in the remaining 20 are steadily pushing ahead.

The Utah Patients Coalition has gotten enough support to get its initiative on the ballot this year. If it passes, patients with certain conditions would finally have access to cannabis in Utah.

In true Utah fashion, it’s a bit more conservative than the initiatives in other states. Patients would only be allowed to grow their own cannabis if they live more than 100 miles from a dispensary. And smoking marijuana would still be banned.

But patients would have access to edibles, oils, tinctures, or vaporizers to administer the treatments.

And nearly everyone in the state supports the measure. One poll found 77% in favor. Another found 72% in favor.

So, it’s pretty likely that Utah will vote to legalize medical marijuana in just a few months.

Show Me a Medical Card

After waiting to see how it worked in other states, voters in the Show-Me State will head to the polls to decide on medical marijuana in Missouri.

This is potentially the most complicated campaign for legalization, however.

You see, there are three competing legalization initiatives that got enough support to make it onto the ballot. So voters will get to vote yes or no on each of them. The biggest differences are how they would accomplish the legalization (constitutional amendment or change in statute) and the tax rates (4%, 15%, or 2%).

Potential complications aside, this shows that voters in Missouri want some form of medical cannabis. And they’re likely to approve at least one of the measures, perhaps all three.

And the Grand Total Is…

If all four states vote to approve their various initiatives, we’ll have 32 states with legal medical marijuana industries. And we’ll have 11 with booming recreational markets, too.

Plus, there are groups in both Oklahoma and Ohio, medical marijuana states, pushing to legalize adult use.

The organizers in Oklahoma still have a lot of ground to cover. But it’s possible we’ll see a vote on recreational use in Ohio by next year.

That’s a solid foundation for the massive industry that’s going to come once the entire country legalizes cannabis.

And federal legalization is getting closer and closer to reality with every state that votes yes and every penny that flows into tax coffers.

That’s why I’m so adamant that people get invested now.

If you wait until it happens, well, then it’ll already have happened. And you’ll have missed out on the biggest profits.

"The Best Cannabis Investment Ever"

That’s also why I insist you check out this presentation the founder of our company put together, all about what he’s called “the best cannabis investment” out there.

When I told him about this stock my partner and I had found and showed him its connection to the cannabis industry, he immediately bought shares in his own account.

And he’s already made thousands back in the few short months he’s been invested.

That’s because this stock doesn’t just get you rich as it goes up in price. It actually pays you real money along the way, too.

That’s right. You get checks from this company the whole time you’re watching its stock shoot up the charts.

Over the last year, investors saw their share price more than double. And they collected hundreds of thousands of dollars in cash payments, too.

Talk about adding fuel to a fire. This industry is already red hot. This company is right in the middle of it, providing the one thing everyone else has to have to operate. And now it’s promising to pay you nearly all of the money it makes on any cannabis-related deal.

I really don’t know how you could come up with a better investment in anything. I’m sure you can’t find a better one in the cannabis industry.

This company is practically guaranteed to grow another 1,000%. And it is guaranteed to pay out millions in cash to investors each and every year.

In fact, I’ll be collecting my next payment in just a few short weeks. And I’m planning on using it to buy more stock.

I highly recommend you do, too. Opportunities like the one cannabis legalization is presenting don’t come around often. Don’t miss out on what could be a once-in-a-lifetime chance.

Click here to view the presentation. Or get a written report here to read at your leisure.

Just don’t take too much time to watch or read. Because a massive rally is coming as we approach voting day. And an even bigger one is right behind it when the entire country goes green.

Don’t wait any longer. Get on board for the big win.