In 1973, the Organization of Petroleum-Exporting Countries (OPEC), which controlled close to half the world's oil production at the time, decided to punish a handful of Western nations for supporting Israel in the Yom Kippur War.

The war ended less than three weeks after it began, with Israel winning a major victory over a coalition of Arab nations, headed up by Egypt and Syria.

The embargo that ensued, however, prompted by a multibillion-dollar aid request from President Richard Nixon, lasted for months longer than the conflict, and resulted in oil prices skyrocketing as much as 300%, from $3 per barrel to $12.

On the ground, this is what it looked like: 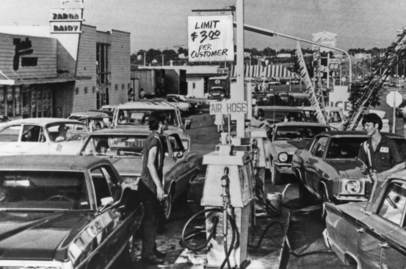 Cars lined up around the block, with fuel rationing in place across the nation. For a country that depends as much on personal and commercial transportation as the U.S., the embargo could not have hit a more vulnerable target.

U.S. GDP stagnated in the mid-'70s, which could've been expected, but some of the legislative scars of this time are still visible decades later — the 55 mph speed limit on national highways being one example.

In January of 1974, the embargo ended and oil supply and pricing eventually returned to normal, but the point was clear: If the U.S. had a strategic weakness, energy was it.

The effects of the embargo were shocking for both individual Americans and American industry alike, and one would assume that our society would've made a good-faith pledge to never become that energy-dependent again.

Today, the lack of commitment to that pledge is starting to show itself in a potential repeat of the 1970s.

As of 2021, the Chinese Communist Party (CCP) controlled 51% of the world's chemical lithium supply.

It also controls a huge chunk of global lithium exploration, as well as production of the end product — lithium energy storage solutions, ranging from the rechargeable batteries in your phone to much larger commercial distributed energy storage systems like the kind required by every renewable power source.

With the world's automotive and commercial transportation industries now barreling toward a zero-emission, gas- and diesel-free future, the Chinese grip on what is essentially the oil of the 21st century is far stronger and more complete than the Arab world's hold over the oil of the 20th century ever was.

After getting your report, you’ll begin receiving the Wealth Daily e-Letter, delivered to your inbox daily.
As you read this, Chinese President Xi Jinping, and Russia's strongman, Vladimir Putin, are meeting in Uzbekistan to discuss, among other things, Western sanctions and control of a large chunk of the world's energy supply.

If that doesn't get your internal alarm bells sounding, I don't know what will, because despite the volume of cheap goods the Chinese sell to American consumers every year, their loyalties most certainly do not lie with us.

Western treatment of Russia since the start of the war with Ukraine has been viewed as overbearing and brazen by the Chinese leadership, not to mention a potential preview of what could befall China itself if and when the CCP decides to do to Taiwan what the Russians are trying and failing to do in Ukraine.

In the End, Xi and Putin Want One Thing: The End of American Global Influence

All of these scenarios point to one almost certain outcome — China will weaponize its lithium monopoly, thereby freezing the U.S. and its allies economically.

It's what Putin is already trying to do with Russian fossil fuels, only lithium's stock as a power storage medium is only now rising, and the foreseeable future depends on it.

Unfortunately, if a Chinese lithium embargo is indeed in the cards, your ability to live your daily life as you have been won't just be affected in terms of transportation...

Everything runs on lithium, including the power grid itself, which will collapse if the nation's high-capacity storage arrays aren't constantly being maintained and repaired, not to mention expanded to meet ever-growing power storage demand.

Forget lines at the charging station. We're looking at a potential return to the 19th century.

The drive for a lithium alternative is now getting desperate, but there may be a light at the end of the tunnel.

The hope lies in a high-tech man-made nanomaterial as a replacement for the lithium cathode.

Discovered only a few decades ago, this substance cost as much as $100 per gram to produce up until quite recently.

Thanks to a recent technological breakthrough, its production cost just dropped by orders of magnitude.

This material is other-worldly in its physical properties. It's 200 times stronger than steel, yet a single gram of it can cover an area the size of a football field.

The company that patented the natural-gas-and-electricity production method is now starting to produce batteries from this futuristic substance, and the results are equally dramatic.

The electric vehicle that you will most likely buy in the next five years — if you haven't bought one already — could have a 1,000-mile-per-charge range and could charge to 100% capacity in less time than you spend at the pump today filling your tank.

When these batteries achieve mass commercialization, the $50 billion-per-year lithium-ion battery industry will likely collapse, and with it, China's biggest strategic advantage over us.

But here's the real kicker: The financial community doesn't even know this company exists. At least not yet.

Despite holding the key to tomorrow's rechargeable battery market, its valuation is barely above $200 million... That's the most lopsided inefficiency I've seen in years. Maybe ever.

The stock quietly trades on two North American exchanges while its production facility churns out trial versions of its commercial-ready units.

I know this is a lot to digest, so I figured I'd make it easy for all my readers.

Check out this quick video that explains the technology, the company, and the future of the battery space. It takes just a few minutes, but it could change your financial future.