Yesterday, at 3:30 p.m. EST, a now familiar sight blasted into the skies over Southern Florida: one of SpaceX's Falcon 9 rockets, accelerating into low Earth orbit for the fourth time in 2020.

This flight contained not one, not two, but 60 of the company's relatively tiny Starlink satellites, bringing the total in orbit up to an impressive 422. 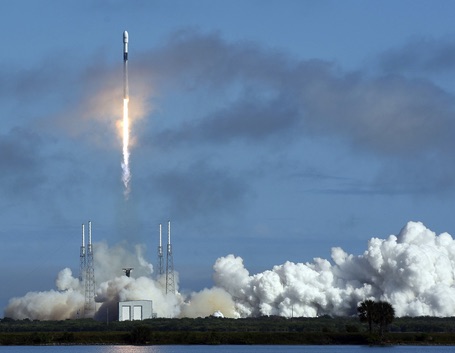 This may seem like a lot of equipment to be putting into orbit, but it pales in comparison to Elon Musk's eventual plans for the Starlink constellation.

Originally, SpaceX had been cleared to put no fewer than 12,000 of these 500-pound communications satellites in orbit, between 200 and 800 miles above the Earth's surface. 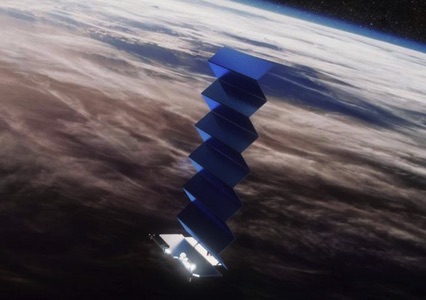 Recently, however, the company applied for an expansion of the program, adding a staggering 30,000 Starlink terminals to the constellation to bring the total number to 42,000.

To put things into perspective, there are currently just over 2,200 human-made satellites orbiting the Earth total — one-fifth of which are already SpaceX units. 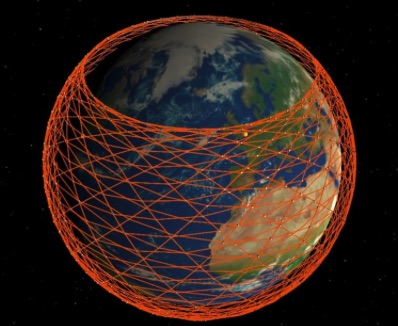 Of course, such an ambitious program has had its share of critics, the most vocal of which have been ground-based astronomists who are none too thrilled about the prospect of glowing dotted lines, such as the one pictured below, interfering with their nighttime observations. Yes, this is an actual photo of a passing Starlink constellation.

You can already observe these luminescent caravans circling the Earth if you live in the Northern U.S. or Canada, or in any place that falls into that same general latitudinal plane. But with only 1% of the total planned number of glowing dots in the sky, it's hard to imagine what the final picture will look like from the ground.

Nevertheless, progress is progress, and when fully operational, the Starlink network will provide high-speed internet access to the remotest parts of the world.

Never shy about responding to his detractors, Elon Musk has already publicly stated an intention to implement less reflective materials in future Starlink unit construction, in hopes of alleviating some of the light pollution.

That said, the triumph for SpaceX, and for its world renowned founder and CEO, has been solidified. SpaceX is by far the world's biggest private satellite owner and operator, and that standing will only expand as the Starlink network prepares to go online later this year.

In Other Elon Musk News, However...

While it is a victory, it's also a very convenient distraction from a problem that's far bigger and far less manageable than processions of twinkling dots in the night sky.

Elon Musk's biggest venture, Tesla (NASDAQ: TSLA), is looking at a problem that just might pose an existential threat — not just to the company but to the future of all electrical vehicle manufacturers.

And the problem lies at the very heart of each and every EV on the road today: The motors which power these vehicles are hopelessly outdated.

We've all seen the incredible acceleration of Tesla's top-of-the-line Model S, (0-60 in less than 2.5 seconds). We've even seen one of Tesla's recently introduced rivals, the Porsche Taycan, edge this already impressive figure out by .1 seconds.

And we've seen the driving ranges of all electric cars gradually improve over the years, but all of these innovations are mere minor details compared to the fundamental flaw inherent in each of the drive motors.

You see, almost every electric motor in service today, from the ones that give your smartphone its vibration function to the giant units driving the world's biggest ships is, in essence, just an updated version of Michael Faraday's first prototype — a design dating all the way back to the 1820s.

The shortcoming in Faraday's design is in the copper coil — that bundle of wire tightly wound around the axle of every electric motor ever built.

The problem is that the flow of electrical charge is not regulated in any way, shape, or form. This nature means that every electric motor in existence only performs at its most efficient at a specific speed.

If the RPMs creep higher or lower than this predetermined speed, the motor will start to lose power.

Up until now, few have felt this flaw, and even fewer have complained about it.

It didn't become a real issue until a company based in British Columbia invented a method for regulating the charge.

The moment that happened, every electric motor in existence, in effect, became an antique.

This company created a 21st century artificial intelligence approach to what had been a very 19th century problem. With complex algorithms regulating the flow of electrons into the copper coil, electric motors could run faster while generating more torque, with an edge of up to 8% over existing designs.

And that's only one-half of the equation.

Every Wind Turbine, Every Hydroelectric Dam, Every Nuclear Power Plant...

The exact same innovation was equally applicable to electric generators, which are nothing more than electric motors mounted in reverse. Instead of the charge going in to turn the copper-wound axle, an external force is applied to the axle and the charge comes out.

With 99% of the world's electricity coming out of generators, this 8% advantage makes every existing "dumb" generator a museum piece.

Remachining their factories to produce these next-gen motors is just one part of the problem. The bigger issue is that Tesla doesn't own the patent.

A small, relatively unknown company in Western Canada does, and it's already starting to partner up with manufacturers to put these advanced motors into consumer products.

It's been a quiet revolution up until now, but that won't last forever... And the company's stock, which is already trading publicly, won't stay at the COVID-19-depressed prices much longer.

Want more information? I've got a full research report covering this company, its technology, and what it means to the future of electric motors and electric power generation.