Elon Musk Hates Hydrogen Fuel Cells... but It's Not Why You Think

When it comes to hydrogen fuel cell technology — one of the heirs apparent to internal combustion's 120-year domination of the global transportation industry — he's made those opinions well known.

He's publicly referred to them as "staggeringly dumb" and claimed that "fuel cells = fool sells," and he's not without evidence to back up these claims either.

His main grievance with the technology is that it's just plain inefficient.

You're Not Wrong, Walter

Hydrogen is electrically split from water in a process called electrolysis, which, true to its name, requires the input of a lot of electricity.

It's then collected, compressed to over 10,000 pounds per square inch to achieve a liquid state at room temperature, injected into giant cylindrical canisters that are bomb-like in more than just appearance, and transported from the production facility to distribution facilities — much in the same way that gasoline has been delivered to filling stations for more than a century.

The energy required to separate the hydrogen, and the effort required to pressurize and deliver this stuff to where the end-user will get access, leads to an energy loss of over 50%.

All in all, the process of getting the hydrogen to its destination consumes more than half of the energy you invested from external sources, leaving less than 50% for the main event.

Unfortunately, that's not the end of your troubles.

Inside the fuel cell, things get even worse as half of the remaining energy is lost in the conversion process. It's then, and only then, once the electricity is on hand and ready to go, does the fuel cell vehicle operate like any other electric vehicle.

Another 15% of what's left is consumed by the motor and mechanical components. 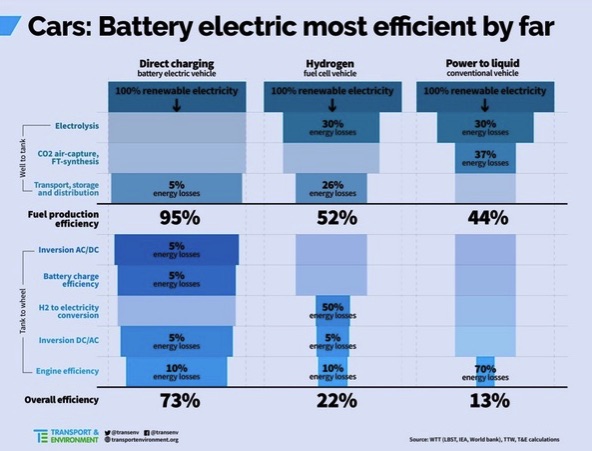 That's not a good figure, especially when comparing it to what Musks's favored energy-storage method delivers.

With no electrolysis and no production and delivery costs to worry about, making the whole thing a no-brainer for the likes of Musk.

And at this point, at least, the rest of the electric vehicle industry seems to agree. By a long shot, batteries reign today as the dominant method for making noninternal combustion-motivated vehicles go.

Though major carmakers like Toyota do have their hydrogen fuel cell-equipped offerings (like the 2021 Mirai), the clear focus is on lithium battery power.

But the fact remains, Musk, who will open a brand new Gigafactory in Grünheide, Germany, this year, is being shortsighted.

Whether he's doing it sincerely or because his massive investment in battery power necessitates it is unclear, but what is undeniable is that hydrogen fuel cell power is here to stay and will likely take the torch away from battery power in the coming years.

Even for a guy who has a tenuous relationship (at best) with what most of us accept as reality, there are a few points of interest that cannot be ignored.

For one thing, hydrogen technology has been proving its worth for decades. NASA used it more than 50 years ago in the Apollo missions.

That means the technology is sound, proven, and well studied by some of the best minds, under some of the most stringent of safety standards, anywhere.

These days, it's the target of massive investment across the globe and is a major component of Biden's proposed $2 trillion clean energy plan.

By 2027, the total market for fuel cell technology is expected to approach $50 billion — more than one-third of where the lithium-ion battery market is expected to be that same year.

Efficiency in the electrolysis/transportation will invariably improve as time goes on, but the real leap forward, the real game-changer, will be onboard production.

A method for creating hydrogen onboard the vehicle itself was proposed a decade ago, in 2011. If perfected and implemented, fuel cell efficiency would immediately end the argument with the lithium-ion fans forever, and with it, Musk's dreams of a battery-powered world by mid-century.

There's a pretty much zero-percent chance that Elon Musk is unaware of all of this or has any illusions about the future of fuel cells.

His problem is that his personal interests are so in conflict with the inevitable outcome, he either cannot or will not give credence to the threat by acknowledging it, on any level.

Personally, I would not be shocked if he secretly held shares of fuel cell companies.

To ignore the opportunity is, as Musk would say "staggeringly stupid."

One of the major prospects in this space is a company that my colleague, Jimmy Mengel, has been tracking for a number of months now.

You've probably never heard the name, but that's exactly what you want in a company whose entire industry is on the cusp of a golden era.

Jimmy published a video that details his findings, so I urge you to check it out and see for yourself.

Yeah, chances are Elon Musk will hate this, too, but remember: Anything that's a threat to him is a potential boon to well-positioned investors.