The Economic Recovery is a Lie!

Ask most Democrats in Washington, and they'll tell you how well the economy is recovering.

Ask most Republicans in Washington, and they'll tell you how poorly the economy is doing.

Well, that all depends on which side of the fence you live.

For many, poverty and joblessness remains a reality. In fact, recent Census Bureau data reveal that from 2000 to 2012, poverty increased overall by 3.7% and 20 million Americans live on less than $3,000 a year. That's crazy!

While the president continues to tout the “bright side” of the economy, the reality is that as a nation, we remain stricken by the ineffective policies of bloated bureaucracies and detractors of free market capitalism.

How can anyone say with a straight face that the U.S. economy has improved, when poverty in this country has either become worse or remained constant for eleven of the past twelve years?

Meanwhile, the Fed keeps printing money like a drunken rapper on a video shoot... ensuring, of course, that this ride into poverty has little chance of coming to an end any time soon.

34% Gain in Less than Three Months

Although I feel for all those folks who continue to struggle, we have to focus on creating and protecting our own wealth today — right now.

Because when these chickens come home to roost, it ain't going to be pretty.

Fortunately, 2013 has actually been a good year for those of us who have invested properly. If you've been playing your cards right, you've enjoyed tremendous gains this year. I know I have.

Truth be told, this has been one of my most successful years since I first started investing more than two decades ago...

Particularly in the energy space, where continued development in the Bakken region has made me a small fortune. Canadian LNG has also been crushing it.

Beyond oil and gas, I've more than doubled my money on his top biotech play this year.

And despite the bearish case against coal this year, I told readers to buy Arch Coal (NASDAQ: ACI) back in June:

At 1:25 today, President Obama will make a major announcement regarding a new climate change initiative. I don't expect anything to be discussed that hasn't already hit the news streams. And it's no secret that the coal industry will come out of this one with the most scrapes and bruises.

So keep an eye on coal plays today, particularly Arch Coal (NASDAQ: ACI), which has taken it on the chin recently and is now trading at some pretty mouth-watering levels.

If the immediate reaction to the President's speech turns bearish on Arch Coal, and the stock sinks further, I'm a buyer. The stock is oversold as it is, and the company's future does not depend solely on U.S. coal consumption

Here's how that one played out...

While I certainly don't want to dismiss the issue of poverty in this country by touting our recent gains, I do want to make sure you continue to profit throughout the rest of this year.

As I mentioned earlier, the domestic oil and gas sector has been a big winner for us this year.

But I've recently discovered another oil and gas play that could make the Bakken look like peanuts. And it's nowhere near North Dakota...

You see, on the North Island of New Zealand, about 268 miles from Auckland, sits a small town known as Hastings. For decades, there's been nothing remarkable about this small port town — until now.

Turns out there are massive oil deposits surrounding Hastings that are ten times larger than the Bakken.

This is huge! After all, it's the Bakken that basically turned the tables on OPEC and put the U.S. back in the driver's seat of oil production.

So, can you imagine what a field holding ten times what the Bakken holds could do for early investors? 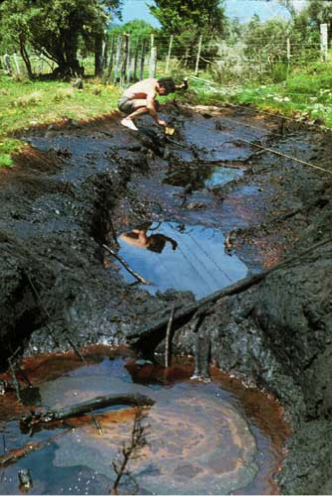 And consider this: There's so much oil in this single location, it's literally seeping to the surface. Check it out...

For oil producers, these seeps are the holy grail.

And in this one region of New Zealand, there are about 300 known oil and gas seeps.

You can read more about these two companies here.

While the scourge of poverty will continue to weigh on the economic health of this nation, you don't have to fall victim to it...

Instead, you can continue to grow and protect your wealth, simply by staking your claim to opportunities like these.