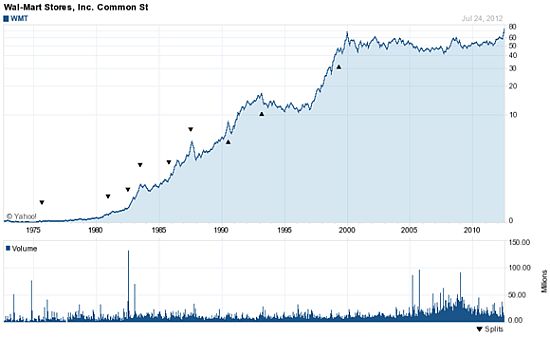 I wrote about Wal-Mart in these very pages back in April in a piece called, “Wal-Mart Fairly Valued at $120 a Share”:

By all accounts, Wal-Mart has been one of the greatest income plays in history. It has raised its dividend for 37 consecutive years — and it raised it again this year.

That’s right — since 1974 WMT has raised its dividend every single year.

You could’ve retired comfortably just from the dividend growth!

When that article was published, Wal-Mart was trading for $61 a share.

I based my prediction that it would double in value solely on the company’s fundamentals.

I mean, consider this: Within the next two years, Wal-Mart will most likely post annual revenues of half a trillion dollars.

I’ve just gotten even more bullish on Wal-Mart — and the reason isn’t exactly good for America...

You see, according to a recent Associated Press survey, poverty in America is on track to reach its highest level since the 1960s.

According to the report:

The Associated Press surveyed more than a dozen economists, think tanks and academics, both nonpartisan and those with known liberal or conservative leanings, and found a broad consensus: The official poverty rate will rise from 15.1 percent in 2010, climbing as high as 15.7 percent. Several predicted a more modest gain, but even a 0.1 percentage point increase would put poverty at the highest since 1965.

Poverty is spreading at record levels across many groups, from underemployed workers and suburban families to the poorest poor. More discouraged workers are giving up on the job market, leaving them vulnerable as unemployment aid begins to run out. Suburbs are seeing increases in poverty, including in such political battlegrounds as Colorado, Florida and Nevada, where voters are coping with a new norm of living hand to mouth.

This is the brutal fact of life: When you’re having trouble paying bills, making ends meet, and putting food on the table, your natural inclination is to cut corners, cut coupons, and buy products from the lowest cost provider.

Ever since the financial crisis hit the United States hard in 2008, Wal-Mart’s business has grown dramatically.

Wal-Mart’s business will continue to boom as consumers look for low cost providers.

And this thesis is confirmed by other discount retailers...

Dollar Tree is near all-time highs: 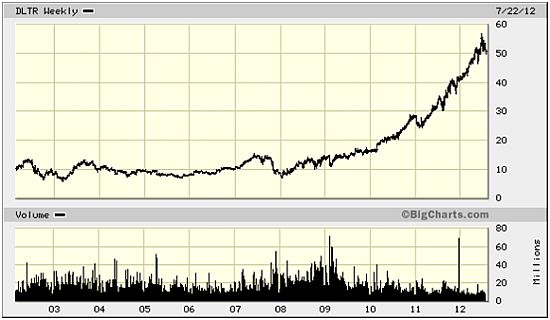 So are Dollar General and Family Dollar: 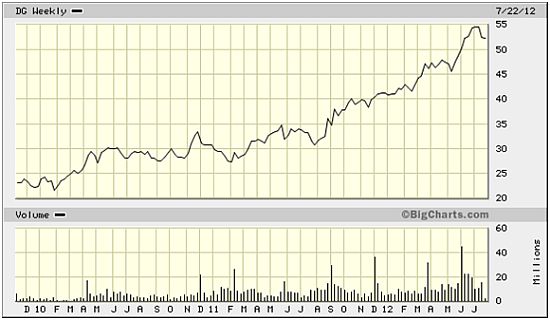 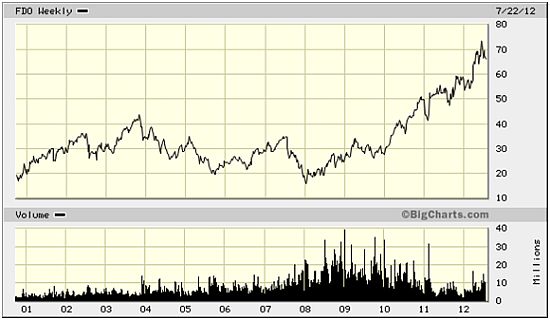 What’s its claim to fame?

It owns 192 retail stores across the East Coast. Each store sells every product it stocks for less than $5 apiece (hence the store name).

Business is booming. Five Below does $321 million in annual revenue.

That’s a Netscape- or AOL-type of IPO!

All of these discount retailers are expanding. In the case of Wal-Mart, it’s expanding rapidly in foreign markets and it's penetrating virgin markets.

In fact, Wal-Mart is rapidly expanding in our neighbor to the north.

Wal-Mart has plans to open between 35 and 40 supercenters in Canada over the next couple of years.

So even though Wal-Mart is the largest retailer in the world, the law of large numbers doesn’t seem to apply to it...

I’m now convinced that shares of Wal-Mart will triple within five years.