The Economist is Reading My Stuff

There are days when I just can’t decide how awesome I am...

I know I’m good. But how in the heck do I consistently nail the big winners, year after year?!

It’s kind of scary, to be honest with you.

I wrote from Nairobi, Kenya:

Kenya has about 20 blocks — all of them leased — and sits on four different oil basins, including the East African Rift and an offshore basin with a great deal of natural gas...

No one wants to be the first to pony up the money for a strike. Don't get me wrong; they are all talking about it.

But as soon as one company hits oil in Kenya, the rush will be on.

Sometimes making money is like taking candy from a baby.

The oil strike in Kenya I foretold last year happened a few weeks ago. One company I recommended jumped 150% overnight — and is still going up.

Just add it to the other East African oil strikes.

This is what the East African oil boom looks like on a stock chart: 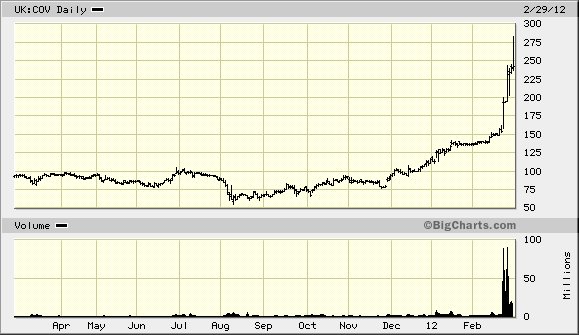 I’ve been telling my Crisis & Opportunity readers to buy a number of companies looking for oil in East Africa. These stocks are doing very well.

And let’s face it — I’ve been the only editorial voice on this subject.

If there were a ground floor, I owned it, moved in, and put beer in the fridge.

Now it seems The Economist is reading my stuff:

IN ENERGY terms, east Africa has long been the continent’s poor cousin. Until last year it was thought to have no more than 6 billion barrels of proven oil reserves, compared with 60 billion in West Africa and even more in the north. Since a third of the region’s imports are oil-related, it has been especially vulnerable to oil shocks. The World Bank says that, after poor governance, high energy costs are the biggest drag on east Africa’s economy.

All that may be about to change. Kenya, the region’s biggest economy, was sent into delirium on March 26th by the announcement of a big oil strike in its wild north. A British oil firm, Tullow, now compares prospects in the Turkana region and across the border in Ethiopia to Britain’s bonanza from the North Sea. More wells will now be drilled across Kenya, which also holds out hopes for offshore exploration blocs.

Kenya’s find raised less joy in Uganda, where oil was first struck in 2006. Tullow, together with China’s CNOOC and Total of France, will start pumping it next year, initially at a paltry rate of 5,000 barrels a day (b/d). But the Lake Albert basin, which straddles the border between Uganda and Congo, holds over a billion barrels of proven reserves and possibly twice that in potential finds.

The USGS says there are over 72 billion barrels of oil in East Africa.

They buy out the little guys who take the risk — companies like Cove Energy above, which is now in a bidding war to get bought out by large multinationals.

Cove used to be a penny stock. It is now a $1.5 billion company.

There are several small companies that are exploring in Kenya or sitting on exploration blocks waiting to be bought out. As the Kenya oil boom story gets more press, these stocks will move higher. They already are.

In the next year or two, Kenya will emerge from being the punch line of a marathon joke to a viable investment choice...

There will be East African ETFs. But by then, the real money will have already been made.

European oil majors are fighting with the Chinese for the most productive licenses. The Indians are looking for a slice of the pie.

These small oil companies that showed up first will see the biggest rewards. See for yourself.