The king may have been exiled from this country, but he still reigns overseas.

King Coal is losing his throne here in the United States, thanks to the boom and subsequent glut of natural gas.

While we can expect coal to claw back some market share as natural gas prices rise, in the long term there is no way around the fact that coal creates too much pollution to continue to burn it in thirty-to-fifty-year-old power plants — which explains why domestic coal consumption is expected to drop another 14% by 2017 by the U.S. Energy Information Administration (EIA).

It would be foolish to write off U.S. coal, though.

Here's a look at where coal is now (keep in mind we're a couple years past the latest macro data from the EIA): 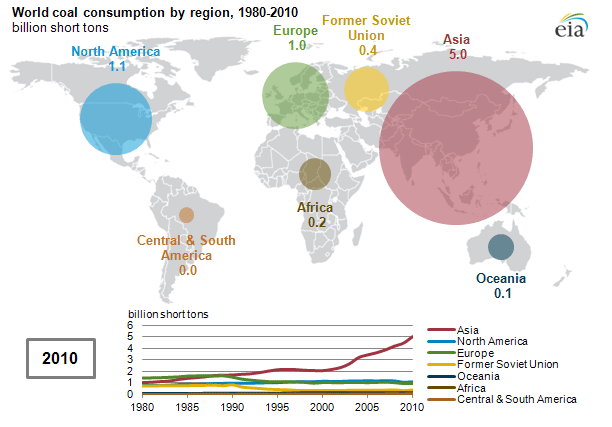 Once again, it's all about Asia.

As you can see, the trend in Asian coal growth is strong and steady over the past decade. Even with a slight downturn for coal used for steel, growth has been consistent.

In fact, while coal slipped on the domestic front, it is poised to hit parity with oil worldwide. The EIA expects coal demand to hit 4.32 billion tons of oil equivalent, while oil demand will reach 4.4 billion tons, by 2017...

Even more promising is the fact that the coal is being used for what has gone from a luxury to a necessity for Asian countries: reliable and ever-increasing energy for people and businesses nationwide.

Just take a look at the last year in India: A series of power outages culminated in a mid-summer outage left 600 million people in the dark. That's more than the population of the United States, Mexico, and Canada combined.

Businesses reported more frequent blackouts have forced them to lower production and spend significantly more on diesel fuel to run backup generators. India's power problems substantially contributed to a dip to 7% growth in 2012 from nearly 10% in 2010.

To put this in context, China and India both need to massively ramp up power generation and stability to continue growing and stave off unrest. Unlike coal shipments from the eastern U.S. to Europe, it is not dependent on the ebb and flow of steel demand from manufacturing needs.

The only question about Asian coal growth is: How much will they be able to mine themselves?

Shipping coal halfway around the world isn't cheap, and coal is bulky and heavy. Without a long-term demand, King Coal would be stuck in a temporary arbitrage position while Asian mining operations caught up to demand.

China produced 46% of the world's coal last year. At the same time, it imported about 223 million tonnes — which represents 20% of the coal it burned and a 78% year-over-year increase. By 2016, Chinese imports are projected to reach as high as 450 million tonnes.

In India, the gap between coal demand and supply jumped to 10.2% last month from 7.7% a year earlier. Coal production increased by just 1% last year while power plant capacity jumped 11%.

The trend is expected to continue due to consistently weak coal production gains, along with systemic and regulatory dysfunctions. 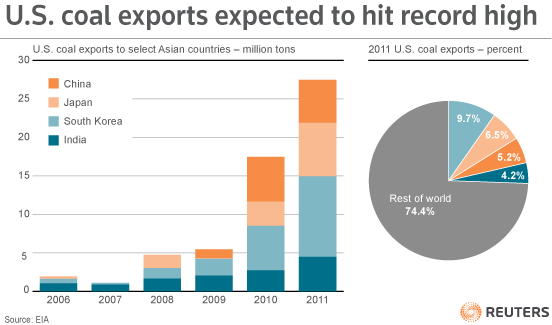 Now that we know this isn't going to be a temporary arbitrage play, it's time to see how this will play out for domestic coal suppliers.

Moving coal from the traditional Appalachian states to Asia, either by rail or sea, would take a long time and be prohibitively expensive.

While we think of states like West Virginia when it comes to coal, we should be looking to the West... 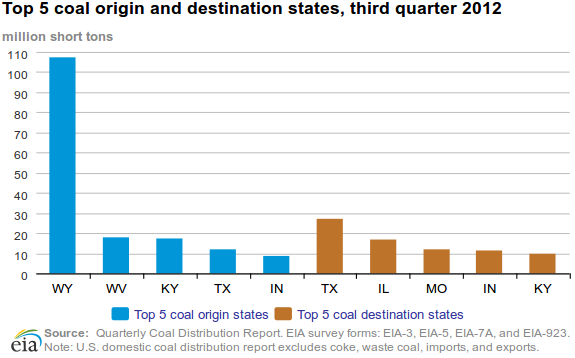 Wyoming is already moving a vast quantity of coal out of state and increasingly out of country.

Peabody Energy (NYSE: BTU) has a heavy presence in the Northwest. And BTU has plans to ship 24 million metric tons of thermal coal per year out of a new terminal planned in Washington state. That would boost U.S. exports by about one-third from current levels.

America may exile King Coal because of its pollution, but it will continuing to rule supreme overseas...

As investors, we should strongly consider playing both angles.

We recommend finding strong exporters in the Northwest United States and Canada.

And don't forget natural gas has already won the war with coal for domination of domestic energy production...

It's only a matter of time before coal is all but gone in our power plants.