Can This Zero-Emission Rocket Fuel Save the World?

It would go down as one of history's single most extreme achievements in the field of aviation.

When he returned to Earth less than two hours later, he would do so as the record holder for the fastest flight ever in a winged aircraft. 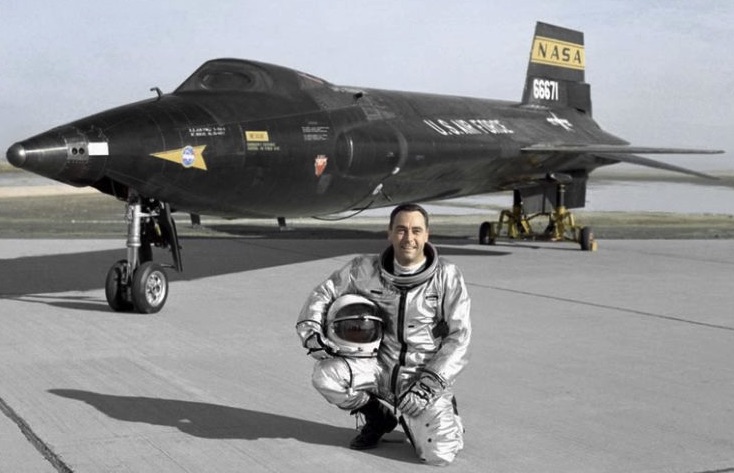 To put that into context, the muzzle velocity of a typical handgun bullet is about 1,000 feet per second, with your high-powered rifle projectiles clocking in at 3,000–3,500 feet per second.

At peak velocity, Colonel Knight's X-15 was covering 75 miles every minute... And the record he set on that October day has now stood for almost half of the entire history of powered flight.

The X-15 was conceived as an experimental testbed and potential training platform for future astronauts. When it first flew in 1959, it was easily the most advanced aircraft in the air. But when it's all boiled down, there were just two factors that made Colonel's Knight's record-setting flight a possibility.

The first was altitude.

The second was the method of propulsion.

The X-15 was a rocket plane, not a jet, which means it didn't need an external source of oxygen to keep the thrust flowing. Untethered to the oxygen-rich layers of the atmosphere, it could keep accelerating until its fuel reserves ran dry, right to the edge of space.

And that's where the most incredible part of the whole story lies — the fuel itself.

The X-15 wasn't powered by just any run-of-the-mill liquid rocket fuel. Instead, it was powered by a fuel that, in its purest form, produces no harmful emissions whatsoever.

Just a little heat, some water vapor, and the power it generates. Nothing else.

This fuel, which the USAF chose for its X-15 program, was shelved by history and commerce for more than 60 years. Today, the world is reawakening to its incredible possibilities.

You see, this "rocket fuel," while capable of propelling aircraft to hypersonic speeds, will also work just fine in your existing car's engine, burning cleanly while emitting nothing but steam.

All it takes to make the switch is a few minor modifications.

It's also remarkably stable and far more safe to handle, store, and transport than any fossil fuel.

So the obvious question is: Why isn't the world running on this wonder fuel?

The problem was production.

As a mass-consumed fuel, it simply had no economic or environmental benefits.

Today, however, that is about to change.

The Missing Piece of the Puzzle

A technology developed at the University of Ontario now allows for the production of this fuel with nothing invested besides electricity, air, and water.

There are no byproducts to speak of besides more of the same water vapor, and the overall cost already beats gasoline and diesel.

I say "already" because this technology is still in the testing phase. The biggest production unit built so far will be dwarfed by eventual commercial models, and as things scale, the price of production will fall.

Ultimately, the plan goes far beyond just the commercial and consumer transportation markets.

Because this fuel takes nothing more than electricity, air, and water to produce, production facilities can replace distributed power storage batteries at solar and wind farms to spring into action when production exceeds demand.

The excess power can be converted into this readily usable, readily transportable, readily sellable liquid fuel. No issues with giant lithium-ion arrays, no environmental impact from battery production, no power decay, no big, spectacular battery failures.

And of course, no carbon footprint.

Elon's Blunder: He Should Have Acquired This Tech Years Ago

You'd think that a company like Tesla might hold the rights to an invention like that, but the problem with big companies like Tesla is that they just don't move fast enough when it counts.

This patented technology was very recently acquired by a small, Toronto-based tech firm. In fact, the final papers were just signed last week.

The patent's new owner plans to take it global. And right now, there isn't much standing in its way.

A few years from now, the company logo might be all over the place: billboards, filling stations, anything pertaining to energy and energy storage will be implicated.

Today, however, it's just a tiny, unknown, whose stock trades at less than a dollar.

I think you're starting to see the size of the opportunity.

I saw it months ago and have been working on a detailed presentation of the facts ever since. Check it out right here, right now.

Access is immediate and free, and inside you'll get all the info on what this fuel actually is (you'll be shocked because I bet you have at least one chemical under your kitchen sink that contains it), the name of the company, its stock symbol, and my analysis.

This could be one of the most important videos you ever see, so don't miss your chance.