Governor Brown Settles Dispute, Once and for All

Just last month, the famously liberal and vehemently progressive state of California took what some might consider a surprising step when Democratic Governor Jerry Brown signed into law a measure allowing for the oversight — and ultimately — the regulation of oil drilling techniques.

For years now, hydraulic fracturing — which involves injecting highly-pressurized chemicals thousands of feet into the ground to break up rock strata and literally squeeze oil-laden aggregate back up to the surface — has been under fire by environmental groups.

One of the more famous scenes from this battle of information involved flammable water emerging from the kitchen spigot of a northeastern Pennsylvania home, which was located in close proximity to one of that state's active fracking sites.

In California, images like these did more than just spur public outcry and send groups of activists to the streets, armed with signs and angry faces... 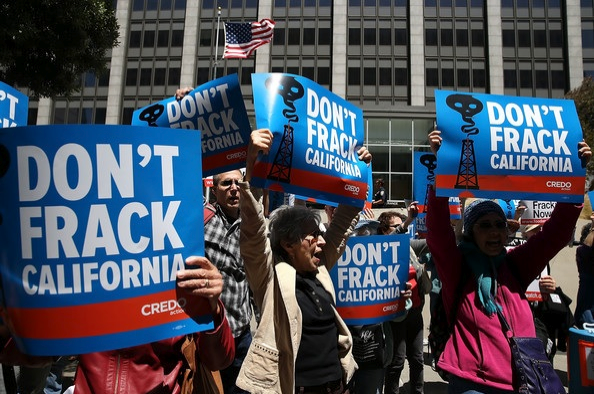 Multiple petitions to ban the practice altogether have been circulated by various groups, including the Sierra Club, and more recently, a cadre of some of the Golden State's most famous celebrity chefs.

With Governor Brown's Sept 20th endorsement of fracking measures, however, it seems that all of these efforts have come up short.

Regulation and oversight, although apparently heavy-handed and potentially restrictive, are actually nothing but thinly veiled euphemisms for legal acceptance.

The measure effectively puts an official end to the consideration of an all-out ban of the process (for now, anyway). And not a moment too soon...

When it comes to California's hydraulic fracturing, the geology in question is the Monterey, a 1,750 square mile geological formation responsible for the majority of oil produced in the southern part of the state.

In total, the U.S. Energy Information Administration has estimated that up to 13.7 billion barrels of crude can be recovered from Monterey Shale using currently available techniques from depths of between 6,000 and 15,000 feet. At today's prices, that's close to $1.4 trillion worth of resource, sitting within reach of existing rigs.

The environmentalists will argue that this wealth will itself come at too high a price — a price even that $1.4 trillion figure cannot justify.

Sometimes referring to the Monterey Formation as "a carbon bomb" due to the somewhat burdensome industrial requirements for this unique geology, special interest groups remain adamant about putting an end to fracking within California borders altogether.

What these groups fail to consider — or simply choose to ignore, I'm not sure — is the fact that California, aside from being the biggest single state economy, is also the nation's third largest oil producer after Texas and North Dakota.

Since the 1980s, however, this production has been on the decline.

And today, despite its immense production capacity, California is a net importer of oil — producing just over one-third of its own daily petroleum requirement.

In 2007 alone, this deficiency cost the state $50 billion... just to pump in what its citizens burn on a day-to-day basis. 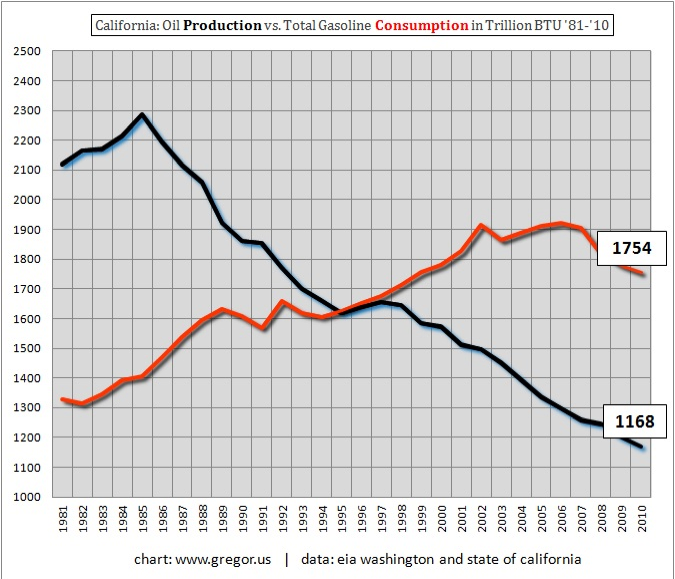 This deficiency, in large part, can be attributed to the relative reluctance of the state to fully embrace and utilize the resource wealth lying right under their feet.

As this chart plainly shows, Texas, which has gone in the opposite direction, has managed to turn its own energy industry around in a matter of just a few years... 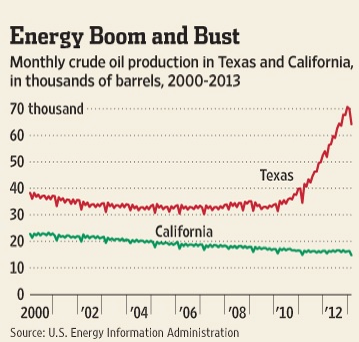 Which means that as far as Californians go, fracking isn't just a question of money going into the state economy...

I've said this before, and I'll say it again: Despite the shrill screams and cries of the environmental groups, the celebrity cartels, and whoever else is stomping their feet at the sound of the word frack, this oil will be produced.

There aren't enough Toyota Priuses in the world to put so much as a scratch on the veneer of that basic premise.

Wells will be drilled, shale will be fractured, and crude will flow... until we either burn it all up, or a new technology emerges to make the entire fossil fuel era a thing of the past.

The only question is: How many legislative and bureaucratic hoops will we have to jump through before it's done?

Personally, I am all about efficiency. If something is unavoidable and must be done, better it be done with as little fuss as possible.

If Californians insist on making this process resemble an especially long and painful trip to the dentist's office, they are free to do so... but in the end, it will change nothing — a fact their own governor has confirmed by signing these oversight and regulations measures.

For many of the less-populated states in the country, this problem isn't a problem at all, but a boon to the economy and a harbinger of newfound fortune.

States like North Dakota, with their tiny populations and massive net-export of oil, are perfect examples how much potential there is both for profit and for wide-spectrum advancement of this new age of North American oil.