Last week, we began the first of a two-part series, detailing Bill Gates’ top technology breakthroughs for 2019 from the perspective of an investor. A link to Part 1 of this series can be found here, but for those who don’t wish to go flipping between tabs, I’ll go ahead and repeat a bit of last week’s introduction here:

Every year since 2001, MIT Technology Review has released an annual list of its top 10 breakthrough technologies. The publication’s editorial team has curated the list on its own for nearly two decades, but this year Bill Gates stepped in to build the list.

With Gates taking over curation this year, I took some added interest and decided to dedicate a few of my editorial slots to parsing out his picks and the relevant investment opportunities that surround them.

As I noted last week, not all of these technologies will have actionable investments, but that’s part of the reason we’ve expanded on each one: to separate the practical from the impractical.

That all said, here’s the second half of our “investor’s take” on Bill Gates’ top 10 technology breakthroughs for 2019.

We’ve obviously all heard of veggie burgers before, but when Bill Gates talks about breakthrough meat alternatives, that isn’t what he’s referring to — at least not in the traditional sense.

Ongoing advancements in food science are now promising to take vegetarian burgers to the next level, a reality that includes both plant-based and lab-grown alternatives.

On the plant-based side, we have the “Impossible Burger 2.0,” which Digital Trends actually named the “Biggest Innovation” at this year’s annual Consumer Electronics Show (CES 2019).

Though technically a veggie burger, this plant-based patty actually bleeds red and sizzles on the grill. Its secret lies in an iron-containing compound called heme, which is abundant in animal muscle. I’ve still yet to try the Impossible Burger myself, but I trust the word of my colleagues who have raved about its taste and likeness to real meat. 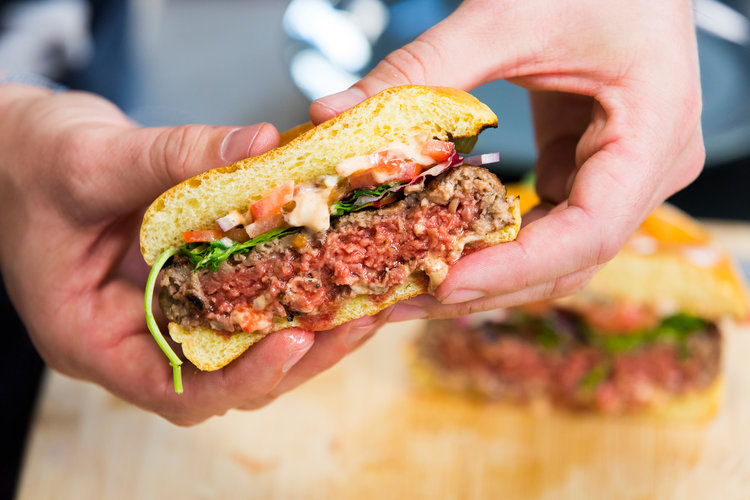 Unfortunately for investors, the maker of the patty, Impossible Foods, remains private, so investing isn’t as simple as opening your online brokerage account. You’ll have to go through a middleman like EquityZen as an accredited investor or wait around for the inevitable IPO.

On the lab side, we have real, verifiable meat that can be grown in a bioreactor (weird as that might seem). Though likely at least a few years away from commercialization, the world’s first lab-grown burger was actually tried in London in back 2013.

Since then, production cost of “cellular-based agriculture” has dropped dramatically, and we now have companies like Israel-based startup Future Meat Technologies promising lab-grown meat at $2.30 to $4.50 a pound by 2020.

Frankly, that timeline looks a bit overly ambitious, but investors would be mistaken to write off the investment opportunity as a far-off fantasy. Don’t be surprised if you start seeing lab-grown meat on the menu by 2022.

As you might expect, the investment opportunity here is a bit too early. Tyson Foods (NYSE: TSN) has made investments in Memphis Meats and Future Meat Technologies, but in amounts negligible to public investors for the time being.

There’s no doubt that climate change has become a topic of heated political debate these days, but if there’s at least one thing relating to the topic that our representatives can agree on, it’s the value of carbon capture technology.

It’s a bit of a mouthful, but all you really need to know is that Congress expanded tax credits for carbon dioxide capture technology, through and beyond 2026. Among other measures, the FUTURE Act more than triples the payout per ton of captured CO2 and removes the cap on those credits.

Without getting too much into the weeds, carbon capture is exactly what it sounds like: capturing carbon dioxide from the air and ultimately reducing concentrations in the atmosphere. This can be done directly at the power plant (what many people know as “clean coal” technology) or out in the environment with machines that literally suck carbon out of thin air.

Though not yet viable for economic independence, the carbon capture industry is rapidly maturing, with publicly traded companies like Shell (NYSE: RDS), Chevron (NYSE: CVX), ExxonMobil (NYSE: XOM), and NRG Energy (NYSE: NRG) all jumping into the fray.

Today, there are upwards of 43 carbon capture products underway, with the market expected to grow at a sold annual clip of 8% through 2023.

Technology Breakthrough #8: An ECG on Your Wrist

Fitness trackers are certainly nothing new, and the dismal performance of Fitbit’s (NYSE: FIT) stock over the last decade would suggest this is an industry investors should be wary of, but Gates’ excitement for personal heart monitoring extends beyond conventional wearables.

It didn’t get much attention at the time, but in late 2018, Apple released its latest Watch, equipped with an ECG, or electrocardiogram. ECGs are quickly becoming the new standard for fitness tracking, as opposed to modern optical sensors, which are far less accurate.

The vast majority of ECG tests today are taken in a doctor’s office as a means to help clinicians identify heart rate irregularities such as atrial fibrillation. Atrial fibrillation is responsible for somewhere around 130,000 deaths and 750,000 hospitalizations per year in the U.S. alone

According to the CDC, an estimated 6 million Americans are living with atrial fibrillation, and these people are five times more likely to have a stroke. Roughly 30% of these individuals haven’t been diagnosed, which should highly increase the value of personal ECG sensors.

Unfortunately for investors, there are no obvious pure plays yet for investing in these sensors. If a company like Fitbit or Garmin (NASDAQ: GRMN) were to adopt ECG in their wearables, that could be a potential boon for investors, but for now the tech is nothing investors should get too excited about.

Of all the technological breakthroughs chosen by Bill Gates this year, sanitation without sewers is easily the least appealing for investors.

Of course, we can respect Gates’ humanitarian efforts, but, speaking bluntly, there’s not going to be much money in energy-efficient toilets that treat waste on the spot.

There are a number of private companies that manufacture composting toilets, including Clivus Multrum, Sun-Mar, and Nature’s Head, but this isn’t a trend anyone really expects to catch on outside of avid environmentalists and the developing world.

Even if these companies were publicly traded, it certainly wouldn’t be something many people would be excited about investing in. We can take a back seat and simply commend the philanthropy on this one.

Ever since the invention of the computer, humanity has flirted with the idea of artificial intelligence, painting a range of scenarios from utopian to apocalyptic. Today, we seem to be at the very beginnings of conversational AI, with personal digital assistants (PDAs) like Amazon Alexa and Google Assistant rapidly penetrating our homes.

Far from the Terminator-esque machines many have come to fear, PDAs have so far been a point of benefit for many people, helping us manage various aspects of our connected homes, as well as our schedules.

Granted, today’s PDAs aren’t entirely benevolent, with corporations leveraging conversational data however they can monetize it best. Further, we’ve yet to advance far beyond a basic call and response with these assistants. It would suffice to say that “smooth-talking” AI is still further on the horizon.

That said, the AI assistant market isn’t going anywhere but up from here. In fact, Grand View Research estimates a stunning 36.7% compound annual growth rate for intelligent virtual assistants through 2024. 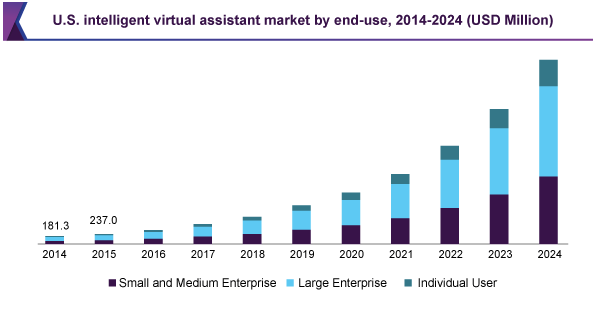 Due to the immensely complicated requirements for this technology, pure play opportunities on AI are elusive, but investors can get exposure with dominant forces such as Alphabet Inc. (NASDAQ: GOOG) and Amazon (NASDAQ: AMZN).

The other route is by investing in the hardware necessary for conversational AI, such as tiny micromechanical microphones that enable PDAs to listen to and understand what we say to them. For anyone interested, that’s an opportunity I’ve put forward in full detail right here.