It’s pretty clear that I’m extremely bullish on the future of legal marijuana.

And I sure hope I’ve made it clear how excited I am (and you should be) about the immense profits waiting to be had.

I already know lots of you have taken my advice and gotten yourself invested in the legal cannabis market.

But I also know the vast majority of you are still sitting on the sidelines waiting for a sign that it’s time to get involved.

And I don’t want to see the same fate befall you that befell the late investors in cryptocurrencies...

First Everything, Then Nothing

If you weren’t living under a rock last year, then you already know cryptocurrencies like Bitcoin shot to astronomical levels in 2017.

And they made many people billionaires. In fact, they created an entirely new generation of super-wealthy people.

Those people — the ones who bought in during the frantic rush to the top — are likely looking at a loss.

So far, Bitcoin is down a full 62% from the highs it saw in the first days of January. Anyone who bought after October 2017 is looking at a loss. And the real bubble didn’t start to form until two months later. So, that’s probably a lot of people.

But they were waiting for a sign to buy into the currencies. And the price screaming up the charts was that sign.

But the people who profited from the mania were those who bought before. Those who listened to some of my colleagues here at Wealth Daily.

And the same thing is going to happen to people waiting for that sign from cannabis stocks. I’m not saying they’re going to crash like cryptocurrencies have.

But I am saying that if you wait for the rally to start, you’re going to have to pay a lot to get a seat at the table. And the monstrous profits I’ve been talking about aren’t going to be so monstrous anymore.

So, I implore you not to wait any longer. There are signs everywhere that cannabis is about to explode onto the U.S. and unleash an avalanche of profits on prepared investors...

If you’ve read any of my other pieces on marijuana investments, you already know major U.S. companies have made moves into the cannabis industry.

Scotts Miracle-Gro has been investing in product lines for growing cannabis from lighting to nutrients and everything in between. Alliance One International is branching off from tobacco to address the growing global cannabis market.

Major companies are investing billions in the market in anticipation of U.S. legalization. They’re not just looking at an international market. They’re looking at the biggest, richest economy on the planet.

And just this week, one of the biggest, brightest “buy” signs lit up bright green as the biggest investment in cannabis history just took place.

Constellation agreed to invest another $4 billion in Canopy, giving it a 38% stake. That’s up from 10%. And it’s a massive endorsement of the legitimacy of cannabis investing.

Constellation also got another $4 billion in warrants that would allow it to purchase up to 50% of the company. And chances are it’ll act and exercise them soon.

Canopy stock shot up 20% in a day, the biggest single-day gain in the company’s history, and early investors saw their profits leap. 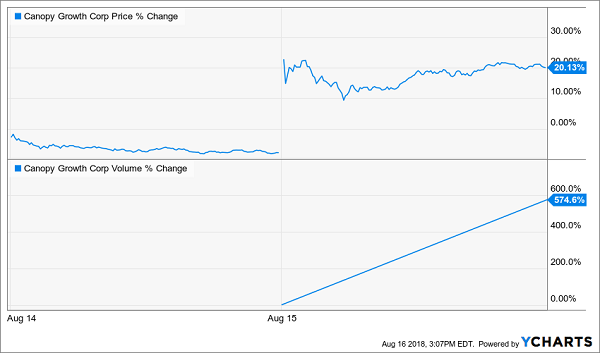 Volume spiked after the announcement, however, too. It went up nearly 600%!

And all those folks who bought after the news hit and drove up that volume aren’t looking at much of a profit, if any, right now.

They bought on the way up, if not at the absolute top.

The Only Cannabis Company Good Enough for Your IRA

Look around. Read my articles. These are the signs you’re waiting for. It’s time to get invested now.

If you continue to wait, you’re just going to keep watching these massive rallies and wishing you were making money, too.

And if you’re worried about picking the wrong investment, then I’ve got the perfect stock for you.

My boss, the guy who started this whole company, called it the “best pot stock [he’d] ever seen.” And he said it’s “the only one” he’ll put in his retirement account.

If that’s not a profound endorsement, I don’t know what is.

I’m a believer, too. And I’ve got shares in my retirement account, too. Trust me that every time I see prices take a dip, I’m adding as much as I can afford.

That’s because this company doesn’t just promise the possibility of 1,000% or better gains. It guarantees me real money will be flowing into my account as long as I’m an investor.

You see, this company operates within the legal cannabis industry here in the U.S. And it has a special deal with the government...

In order to keep operating the way it does, it must distribute nearly all of every dollar it brings in from its cannabis-related business.

As the industry grows and this company along with it, cannabis revenues keep getting bigger and bigger.

And that means there’s more and more money to shell out in order to stay in compliance with the government.

Real people are already collecting these massive and growing payments. Of course, there’s my boss and me. But just last month, these folks cashed in big time, too...

Plus, all three of them have seen their investments more than double in the past year.

Your Last Chance Is Coming Fast

Don’t you want to have your name on that list of people collecting massive payouts?

Wouldn’t you like to tell your friends about that 10-bagger you scored thanks to your brilliant investment?

If you’re still waiting on the sidelines, looking for a sign, THIS IS IT!

I can’t tell you exactly when the rally will be. But I can tell you it’s going to be here before you know it. And your chance to strike it rich will be gone.

Don’t be indecisive. Don’t wait for the rally to start and miss the biggest gains. Don’t miss the forest for the trees (pun intended this time). It’s time to get invested now.

Click here to view a presentation with everything you need to know about what I believe to be the absolute safest (and potentially most profitable) investment in the cannabis industry.

If you'd prefer to read a written report about this opportunity, click here to get a copy of the transcript.

To your wealth (and your decisive action),