As we watch on a daily basis the smoke and mirrors show that the Dow has become over the last year or two, and as we anxiously await the grand finale...

There is a real, physical, tangible economic boom actually happening here in the United States.

And there is no better illustration of this boom than the biggest of the lower 48 states: the often criticized, often feared, often misunderstood — but never underestimated — Lone Star State.

Known historically (and in no small part thanks to the 1980s pop culture TV icon Dallas) for its oil production and oil culture, Texas was the actual setting of the original oil strike, the mother of them all, at Spindletop back in 1901. 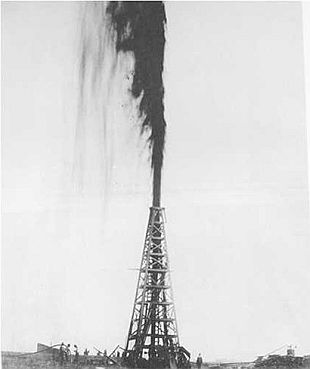 Following the strike at Spindletop, the image of vast, flat plains crowded by the characteristic skeletonized oil derricks became the image of Texan industry, Texan wealth, and ultimately, Texan influence over the rest of the nation — as well as overseas, where its oil comprised a healthy chunk of the global market.

And today, dear reader, I'm writing today to tell you the image of the gusher you see above... is back.

As of last March, Texas is the world's 11th largest oil producer.

That means if Texas were its own nation (and many of its residents think it is), it would rank 11th on the world scene of oil production.

On a list that starts with Saudi Arabia, the United States, and Russia, Texas — with 2.41 million barrels of oil produced per day — comes in at number 11, above Nigeria and below Mexico (which is only ahead by a mere 150,000 barrels).

Taken in comparison with the rest of the United States, the magnitude of this industry is even more dramatic...

Texas, with a state population amounting to 8% of the country's 314 million, makes up 23% of our total national oil output — out-producing the average American citizen, per capita, at a rate of 3 to 1.

And here's the best part: Unlike many of the other names on that list of major oil producers, Texas isn't destined for imminent collapse when the wells start running dry.

Because, like most other early 20th century oil empires, Texas has already been through the decline of conventional oil... nearly 30 years ago: 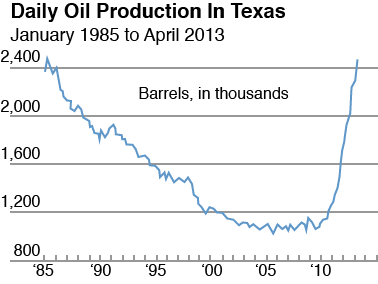 What we're seeing now with this latest resurgence is the product of modern oil production methods.

These methods are the result of technology and innovation, which will continue accelerating production rates while production in the conventional oil world gradually tapers off.

Want to see a dramatic illustration of what the future of our biggest competition on the world oil stage looks like?

Here is an image of their biggest oil field, the legendary Ghawar, which single-handedly gave the Saudis their wealth and their empire: 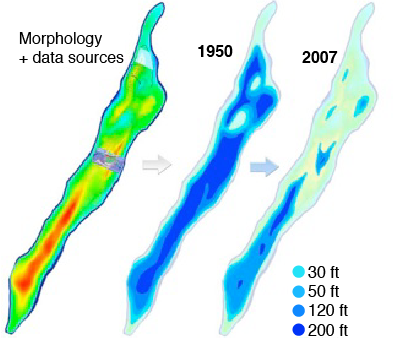 You'll see from the legend that 62 years of constant production have taken their toll. Even the largest conventional oil field ever discovered can be depleted, given enough demand.

Texas, however, will not be having this problem.

If the above image were of Texan shale oil reserves, 2013 would be the Saudi equivalent of the early 1950s.

In other words: Decades remain before talk of production decline becomes realistic.

I think you're starting to get the picture...

Something tells me you're going to be seeing more and more on this resurging oil economy in the coming months.

And I plan to stay on top of it.