Record are being shattered...

Back in May in Wealth Daily's sister publication, Energy and Capital, I wrote about the emergence of another Bakken-type play...

But it gets even better... because this formation just announced another blowout month for April.

It's quickly gaining on its much-hyped cousin, the Bakken.

Check this out: Oil production in Texas' Eagle Ford rose 54% in April from the previous year.

So even from February of this year, production has grown a robust 13%.

According to a recent report by Bloomberg:

The nine fields that make up the majority of Eagle Ford yielded 530,689 barrels of crude a day, according to preliminary data released by the Texas Railroad Commission, which oversees oil and gas drilling in the state. The fields produced 345,702 barrels daily in April 2012.

February output was revised to 561,554 barrels a day from the preliminary report of 529,874, the commission said. Production totals typically increase in subsequent months as the state receives revised, corrected or late reports.

Growing production out of Eagle Ford is helping fuel a renaissance in Texas crude. The state produced 2.37 million barrels a day in March, the highest monthly level since February 1986, according to the Energy Information Administration, the statistical arm of the Energy Department. The EIA hasn't released March production data for the state.

At this rate, Texas could be producing 2.5 million barrels of oil per day very soon. That would be its highest output since 1982.

Texas has become the hottest play in the world, holding over 10% of all the drill rigs on the planet. And it's only getting hotter, as drillers go back to legacy wells in the legendary Permian Basin to frack the rest of the oil that's been left behind.

There's so much oil left to be fracked that the EIA recently had to revise its world oil supply estimate — upwards!

The EIA increased its estimates of global oil deposits by 11%, thanks largely to American shale. 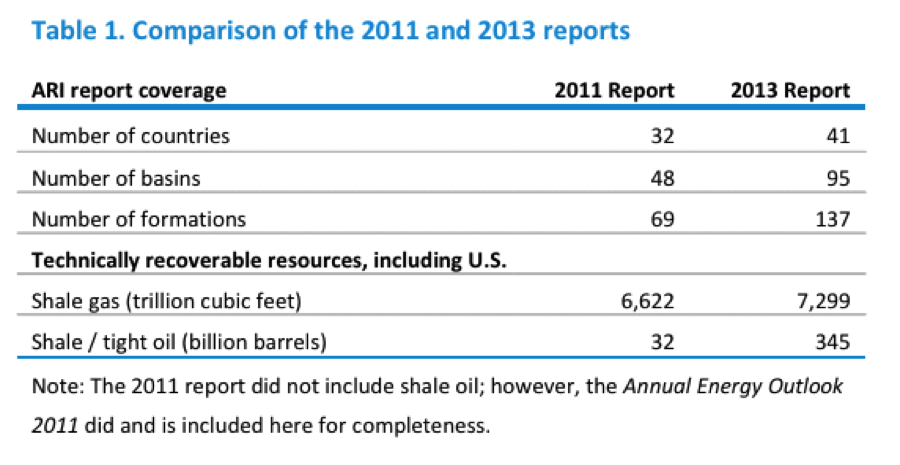 The EIA has always wrote about the promise of shale in very cautious words. But now it estimates an additional 313 billion barrels' worth of shale or tight oil, compared with 2011 estimates mostly focused on the United States.

The EIA can longer ignore the boom in shale...

And what started it all was the Bakken.

Record oil production numbers were just released for the month of April.

And if you think that's good news, read the following:

North Dakota Department of Mineral Resources Director Lynn Helms said the unseasonable weather contributed to an increase in the number of oil wells waiting for hydraulic fracturing crews. An estimated 490 wells were awaiting fracking at the end of April.

"The drilling rigs are continuing to outpace the frac crews and the ability to get wells on production," Helms said. "That's because industry has just not been able to catch a break with regard to weather."

The wet spring weather and road restrictions that have continued late into the season have affected the number of drilling rigs in North Dakota, Helms said. The count was 184 on Friday and is expected to climb near 200 in July.

Helms said he also expects that frac crews will catch up on the backlog of wells during July and August.

"We expect a big surge in production coming up in the summer months," Helms said.

Just when you think it can't get any better... it does.