Another Financial Crisis is Building

As I get older, it is incredibly rejuvenating to go back and revisit things that I am passionate about — my inspirations.

Sometimes it's music from an old album. Other times, it's pictures of my kids when they were babies. Or it could be a phone call to my brother to reminisce about the time we drove his old green Karmann Ghia from New Orleans to the Colorado Rockies, camped for a week, and then drove home to Richmond, Virginia.

There was still snow on the ground in Rocky Mountain National Park, and I forgot my sleeping bag. On the way home from Colorado, the threads in one of the spark plug sockets partially stripped, and the spark plug kept popping out of the cylinder. Of course, we didn't have any tools, so we had to periodically pull over, let the engine cool, and then screw the plug back in by hand. The car died literally as we turned into our Dad's driveway.

To this day, we joke that it was a small miracle that we survived.

Last week, I came across a source of inspiration that I had completely forgotten about. It's in video form, and I hope you'll watch it (I also hope you'll return to this article when you're done): 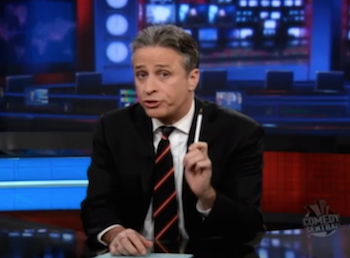 If you don't want to watch it, what you're missing is a compilation of comments and interviews from CNBC in 2007 through early 2009. There are some real gems, like:

You may wonder how I find inspiration in scene after scene of Wall Street CEOs lying about their companies before and during the financial crisis and the CNBC talking heads eating it up as they tell their viewers to keep buying...

But the reason it inspires me is because it serves as a very stark reminder of two things: One, Wall Street investment banks cannot be trusted. And two, people who think they have all the answers probably don't, so it's critical to draw your own conclusions from the available data.

I remember the day Bear Stearns went bankrupt like it was yesterday. It was scary because you knew something was not right with the big banks and the economy. And the constant attempts by CNBC and others to explain it away just made the feeling more ominous.

Watching that video reminds me exactly why I love my job...

What Should We Worry About Now?

You may recall that leading up to the financial crisis, there were a few voices in the wilderness saying that there were some big problems coming for subprime mortgages, while the majority tried to explain it away with a "no big deal" attitude.

And so as I look around the financial landscape these days, I see a clear parallel with the financial crisis. It's a situation that has the potential to send the global economy into recession and stock prices plunging lower. But CNBC and most financial media continue to give it a "no big deal" approach.

Of course, I'm talking about China. And not for the first time...

China has been the engine of global growth for the past decade, as its economy consistently put up +10% growth. I'm not the only one to document how China's economy led to the surge in commodity prices and the boom time for commodity base economies like Australia, Brazil, etc.

I've also documented that the commodity cycle has ended as China's economic growth has slowed. And I've showed how this will likely lead to some real problems for emerging market economies.

All the while, you should notice that CNBC and other financial media are once again taking that "no big deal" attitude to China's slowing economy.

"Yes, China's economy has slowed to 7%, but that's still pretty good" is the prevailing attitude about China right now.

Favorable economic fundamentals? New growth drivers? These may be great buzzwords, but what do they actually mean? And should we really take China's leadership's word for it (since that worked out so well when Wall Street bank CEOs were adamant that their banks were healthy)?

It's Different This Time

The fact is, every significant measure of China's economic growth suggests that growth is nowhere near 7%. Railway freight traffic is flat (not growing). Real estate investment is barely growing. New home construction is shrinking. Exports are falling. 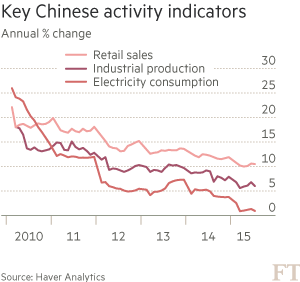 China's economy has been slowing for five years despite repeated stimulus efforts. Commodity prices have been falling for four years. And still, it's no big deal...

China's taken extreme measures of devaluing the yuan and cutting interest rates, and still it's no big deal...

The fact is, China's growth is almost certainly less than the 7% that's the consensus right now. It may even be less than 5%.

You can see the U.S. stock market is down quite a lot over the last couple of months. This is because of China's slowing economy. Investors are raising cash and getting out of stocks. And all the while, CNBC will keep saying that the Chinese economic slowdown is no big deal.