It's crazy to think that it's only been a week since I wrote to you about Elon Musk's unprecedented bonus structure, approved by the board of his flagship company, Tesla Motors (NASDAQ: TSLA).

Just weeks earlier, Musk had been awarded the first of 12 potential bonus tranches for leading the company to a sustained $100 billion valuation.

When exercised, this first taste was worth north of $700.

Today, as I watched premarket trading of Tesla shares go up and over $1,350 and the company's market capitalization crosses the $250 billion market cap mark, Musk will start to count down the days until his next tranches are unlocked. 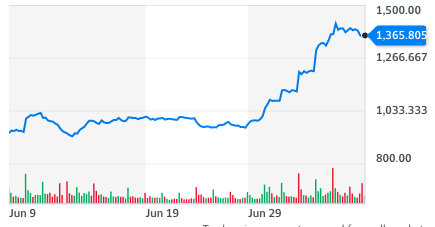 If the company manages to sustain these levels through the end of the year, he will rake in close to 2 billion off each successive installment.

Unless the bottom drops out sometime between now and the end of December, he would have made $10,280,000 per day, every day, in the second half of 2020 — and that's not including the gains he's already taking as every one of his 34 million existing shares of the company, and his other ventures, continue to appreciate.

That's how it's done, ladies and gentlemen.

Capitalism at Its Finest

Of course, this is all an oversimplified explanation of what's really happening. Musk's bonuses aren't just checks in the mail. They're options to purchase 1.69 million shares of the company, per tranche, for $350 — more than $1,000 off the retail price as of today.

If all 12 of the valuation milestones are hit and maintained, the total payout, based on the final milestone's threshold share value, will be just shy of $56 billion.

Combine that with his existing net worth, and he will likely become the richest man in the world.

And let's be realistic here, people, it probably will happen.

Even on a bad day, Musk is nothing if not one of the world's most determined hype men.

Just yesterday, via pre-recorded video at the World AI Conference in Shanghai, he announced to the world that Tesla's quest for a fully autonomous vehicle might finally come to an end as early as this year (just in time for those next few tranches to vest).

The functionality, referred to as level-5 autonomy, will require no human driver behind the wheel at all.

One Step Closer to Driverless

“I’m confident that we will have the basic functionality of L5 autonomous driving this year,” he stated. “There are no fundamental challenges.”

If this comes to pass, it will be the most significant technical milestone the company has ever achieved; a game changer for the EV industry if there ever was one.

Whether or not this is factual is yet to be determined. But regardless of what he says, there are plenty of challenges before such a product can be introduced into the mass market.

Legislation governing such a technology alone will take years to work out, and unlike Tesla's cars, the lawmakers in charge of making this happen are not known for their speed or efficiency.

Nevertheless, it seems there is nothing out there that stands in his way now. Whether it's on the ground or in space, the force that is Elon Musk is unstoppable.

There is one factor that the mainstream media does not seem to want to cover.

It's something that Musk himself is certainly not tweeting about.

You see, the motor component of each and every existing Tesla has a problem. A big one.

It's not something that's peculiar to Tesla, either. All current electric vehicles have the same issue.

This issue, up until a couple years ago, was not an issue at all... Because there was no solution to this rather glaring underlying problem, every producer of electric motors (and the products which they go into) the world over was on a level playing field.

The issue only became a fatal flaw when a company you've probably never heard of, quite recently, came up with a solution.

Once that happened, every electric motor ever built became instantly obsolete. From the tiniest ones to the house-sized monsters powering the biggest cargo ships and oil tankers.

Overnight, every device and every vehicle that relied on electric motors to function became dinosaurs.

And it's all because of a single innovation — the first major breakthrough in electric motor design since the very first prototypes were created almost 200 years ago.

So, what's this problem?