Last month, the era of ammonia fuel came one milestone closer as an NH3-powered tractor, designed and built by a team of MIT graduates, proved concept viability in yet another industrial sector.

While the heavy shipping industry is already years deep into researching ammonia as a replacement for marine diesel, this was the first major breakthrough in implementation of the fuel for the purpose of farming.

Headed up by four graduates of the Massachusetts Institute of Technology, Amogy Inc., a Brooklyn, New York-based startup, adapted a standard John Deere tractor to run off ammonia in place of diesel. 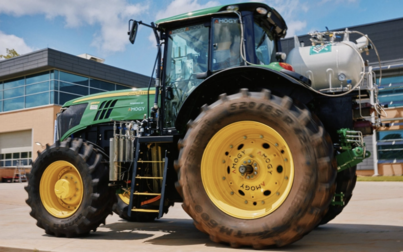 The result was a zero-carbon-emission engine with a 100 KW output, capable of similar endurance as the standard-fuel version.

While a nonexistent carbon footprint may be the most salient result, the benefit of ammonia over fossil fuel or even battery power is particularly notable in the farming application.

One Simple Retrofit Can Make Any ICE Engine Carbon Neutral

Ammonia can be pumped into a tank the same way as traditional gas, diesel, or kerosene; is far more stable; and requires only minor modifications to existing engine blocks. And very soon, farmers will be able to produce the fuel on demand, on-site — an advantage that no traditional fossil fuel can offer.

To be clear, ammonia as a power source is nothing new. It was used as early as WWII, in Nazi-occupied Belgium, where diesel was in short supply.

What is new, and potentially game-changing, is the clean method of production.

Traditionally, ammonia was produced using steam air and natural gas. The result produced high concentrations of CO2 as a byproduct, all but negating whatever environmentally friendly aspects the burning of the subsequent fuel may have offered.

Today, however, ammonia is being produced using nothing more than air, water, and electricity. The result is pure ammonia, water vapor, and a minute volume of nitrogen gas — one of the most abundant elements found in the Earth's atmosphere.

Right now, there is a company based out of Vancouver, British Columbia, that is already building carbon-free ammonia production units for the commercial market.

For the First Time Ever, On-Demand Fuel Production From a Fridge-Sized Production Unit

These units, about the size of a standard refrigerator, can be delivered almost anywhere and can run off the local power grid as well as from sustainable energy sources such as solar and wind power.

That electricity, coupled with ubiquitously available air and water, can produce viable ammonia fuel for any application necessary.

The benefits for farming should be self-evident, but it's only the beginning of the improvements to the global energy supply chain.

Using this new production method, electricity can be converted into ammonia and then used to power generators for conversion back into ammonia, thus creating a kind of liquid battery.

The company pioneering this game-changing production method is still unheard of in the mainstream investment world, but its patented technology could end up under license to produce everything from heavy shipping bunker fuel to standard automotive fuel before the end of the decade.

With a market capitalization of less than USD$20 million, it should come as no surprise that the mainstream press has also been slow to pick up this story, but, as always, we strive to beat the MSM to the punch when it comes to new ideas with global implications.

The Biggest Stock Story Since Tesla?

When I started covering this company a few months back, there were almost no articles of any kind on the topic of clean ammonia fuel.

Today, those articles are starting to appear in specialty journals.

Soon enough, the mainstream media will do what they always do — arrive late to the party and bring the masses with them.

In order to most efficiently convey all the relevant information on the company behind this paradigm-shifting new technology, I've put together a video presentation available right now to any Wealth Daily reader.

It's quick and informative and gives you all of the background on the technology and the company spearheading it all.

Most importantly, because this company is already trading on the public markets, you'll learn everything you need to know about the stock and the prospects for early investors.

This could be one of the biggest tech sector stories of the decade, but right now you're among just a handful of people that know it's happening.

Get the rest of the story right here.