You might not believe me when I tell you, but Amazon is really interested in getting cannabis legalized.

It just threw its backing behind a new push to get cannabis off the controlled dangerous substances list and end nearly 100 years of prohibition. 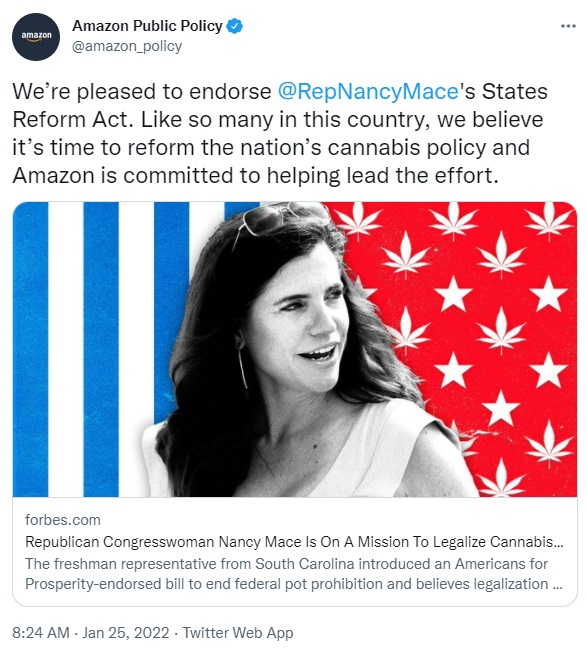 And as the second-largest employer in the United States, it’s got some clout in Washington, D.C.

But does that mean Amazon is going to start selling marijuana in the near future? Honestly, it very well might…

You see, this isn’t Amazon’s first foray into the debate on legal cannabis…

Much to many folks’ surprise, Amazon, which is based in Washington state where weed has been legal for nearly 10 years, drug-tests employees for cannabis.

And up until mid-2021, it was firing or rejecting anyone who tested positive.

But the company finally got the memo that weed is legal and is changing its tune.

Not only did the company make an announcement that it’s not going to be testing some employees for cannabis anymore, but it also put its full might behind the MORE Act.

And now it’s pushing support to a GOP-backed bill that hopes to accomplish the same end goal: Legalize cannabis nationwide.

Now, this doesn’t mean Amazon is getting into cannabis just yet. But it does mean we can expect the company to do so in the future. 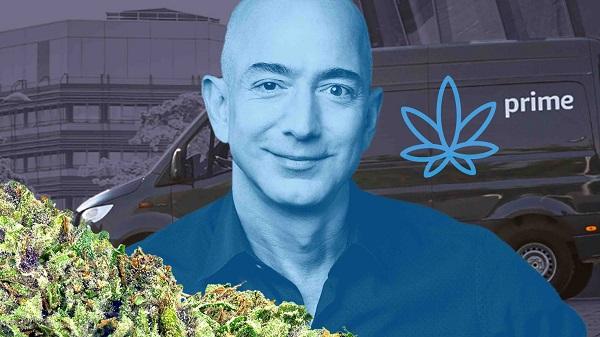 And that could have either amazing or terrible consequences for the rest of the industry.

As far as the cannabis industry goes, Amazon’s support is a big deal. The company does billions in sales every year and employs millions of people around the world.

It also spends a lot of money lobbying politicians to get what it wants. So its support of legalization may actually help us get there.

But if Amazon starts selling cannabis, that could be a pretty bad thing for your local dispensaries and the companies that operate them.

Will Amazon entering the cannabis market kill the rest of the competitors? It didn’t go well for Barnes and Noble after Amazon started selling books.

Or will the entrance of an established company like Amazon push the industry to the next level?

I don’t think Amazon is going to put your local dispensary out of business in the next few months or anything.

And I’m not telling you to sell all of your pot stocks on the spot.

But one thing I am sure of is that if the company starts to retail cannabis as one more of its trillions of products, a group of investors is going to be very happy…

You see, this group of investors is in on a strategy few know exists that allows them to essentially get paid every time a package leaves an Amazon warehouse.

I call it “Prime Profits” because the majority of the payouts come from Amazon (albeit indirectly). And when I say massive, I really mean it…

Adding millions of pre-rolled joints to that revenue stream is only going to make it that much sweeter of a payout.

How sweet? Well, the next one recently got calculated (and it doesn’t include weed since they’re not selling it yet).

It’ll be distributed to shareholders in just a few weeks. And it’s one of the biggest in company history!

I’m talking about an overall distribution worth nearly $500 MILLION!

It’s the first payout they’ve gotten this year. And there will be at least three more coming later in 2022.

That’s going to push this year’s total payout to nearly $2 BILLION… at the bare minimum.

And since there’s still time to get in on the next payout, I want you to get a piece of that massive pile of cash.

I uncovered this incredible income stream a few years ago and alerted the members of my investing community, The Wealth Advisory, to it immediately.

They’ve been profiting and collecting steady income ever since. But helping them isn’t enough for me. I want to help everyone get a piece of this big, delicious pie.

So I put together a presentation that details the opportunity and the strategy and even gives you some examples of what you can build your payouts up to.

You’ll get all the information you need to get yourself invested in the “Prime Profits” program and start collecting your own potentially massive payouts.

And you’ll have the opportunity to join the tens of thousands of like-minded investors who are already profiting from my advice on cash-spinning, profit-generating investments like “Prime Profits.”

It’s a really incredible opportunity and I really hope you take advantage of it.

Then, the next time I’m writing about the massive payouts people are collecting with this indirect Amazon investment, I’ll be talking about you.

So take a little time today (or over the weekend) to give my presentation a watch.

Or, if you prefer, I’ve also got a written report where you can get all the same information and opportunities.

Time Prime Waits for No One

I just ask that you act quickly. The next payout is coming very soon. And there are all sorts of distractions bound to pop up in those few short weeks.

If you take care of it now, you can just sit back and watch the payout come in. If you wait, you might miss out on your share of $500 million.

I don’t want that to happen, and I’m willing to bet you don’t either.

So take a little time today and watch my presentation or read my report. And then get yourself set up to collect this payout and every future payment for as long as you care to participate.