For the better part of the second half of last year, we spent a lot of time telling you about a unique oil situation.

As is normally the case with our insights, the events we foretold are currently unfolding...

When Kenya's energy minister took to the podium at a recent conference, one simple sentence confirmed what we told you would be true: “We are becoming the New Middle East.”

It's not hard to see why. The same ancient formations that gave Saudi Arabia its large oil deposits also extend downward into Africa.

This is the fact we spent so much time trying to tell you about.

Everyone knows the Saudis are the Kings of Oil...

The legendary Marib-Shabwa and Sayun-Masila Basins — which include the biggest oil field of them all, the massive Ghawar — has allowed their wealth to climb to the trillions... and has allowed the Middle East to dictate politics for decades.

Common thought was that oil wealth was monopolized by the Arabian Peninsula — which is why we knew billions would be made when the world started learning the great oil fields of the Middle East also extend down into Africa. 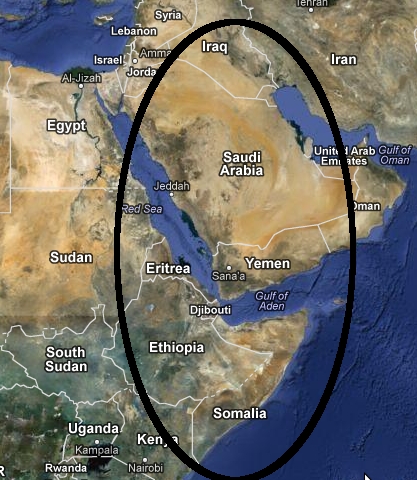 We released a full report about how Africa had “stolen” almost $300 billion worth of King Saud's oil and about the company you could invest in to capitalize.

That was June last year.

Being among the first to know the companies taking advantage of large East African oil deposits would have netted you 683%.

Here we are, some 15 months later, and a “breaking” news story from Reuters this week tells us:

East Africa has become a hotbed of exploration after several petroleum discoveries in the area pushed the region into the international limelight.

Notice the multiple “afters” in those two sentences.

We told you before Africa Oil drilled its first well — not after its third. (This one could yield 120 million barrels.)

We told you before East Africa became the world's newest oil hot spot.

If you missed the opportunity to bank the near-700% gains that resulted, make sure you read this.

It's our newest report about oil and gas: where it's coming from, where it's going, and how to profit from it.

But like the Africa Oil report from last year, you need to act now — or you'll read about it somewhere else later...