A Time for Greed? History Says it Is

For most investors and casual stock market watchers, the last 6–12 months has been a jittery time to say the least.

Time and time again, the Dow has toyed with a new all-time historical high, and yet, despite coming within a hair of breaking through the seemingly magical 27,000 mark (Dow futures were trading at 26,850 at the time of this writing), that milestone remains conspicuously untouched.

For the investing community, this repeatedly failed attempt to set a new record has started to resemble the Soviet lunar program of the late 1960s.

They had everything going for them. It was seemingly within reach. And yet the whole affair ended in a series of smoking craters.

That series of smoking craters is evident when viewing the Dow's chart from the last five years: 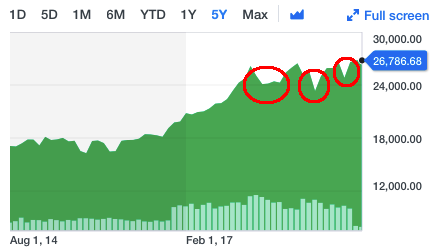 Repeated attempts, with repeated failures, all reaching for the next milestone and yet coming up just a hair short, only to fall back down again.

For a population that remains obsessed with chart patterns and the prediction of mass emotional effect, this repeated failure to progress usually signals one thing: that collapse is coming.

If You're Not Growing, You're Dying

The philosophy can be summed up in a simpler concept: If you're not growing, you're dying.

Which makes an article published in Barron's yesterday a bit of a surprise.

Based on market performance in the first half of 2019, now is the time to be getting greedy.

Here is the reasoning:

It may fly in the face of common wisdom, which dictates that variables like a slowing global economy, trade war saber-rattling, recent changes in the interest rate, and the coming presidential election would make this a time to minimize risk, but the theory behind a coming bullish period may be easier to explain than you think.

One of the strongest factors at play here is the presidential cycle itself.

Third years for first-term presidents are historically strong for the markets. In fact, gains average an impressive 12.8%, compared with 5.8%, 4.3%, and 7.1% in years one, two, and four.

And it makes sense, too. In the absence of war, what would be a Chief Executive's main go-to in terms of bolstering his chances for reelection?

The obvious answer is the economy — and the stock market's major indices are the pulse and blood pressure of investor confidence.

In a way, Barron's prediction mirrors the emotions of President Trump's biggest fans, as well as his biggest detractors.

His fans think nothing will go wrong so long as he's in office. His detractors are convinced that he will keep "pumping the stock market" to secure a second term, only to let it fall into ruin if he's successful.

Any way you look at it, there is plenty of reason to believe we're in for another year of positive investor sentiment.

The question remains, given this information, what do you do now?

How do you play the coming patterns?

Well, one way to do it is to sit and let your existing investments draw out their gains for another six months or so, then reevaluate based on the progress on the presidential campaign front.

But for the profit-minded investor, resting and collecting another 4% or 5% gain isn't going to cut it.

In fact, doing that would be viewed as a wasted opportunity. Not much better than a loss, really.

The seasoned veteran would use the high probability of cross-spectrum growth and allocate at least some of his portfolio to higher-risk investments during this time.

Now, that doesn't mean finding the most speculative play you can and mindlessly dumping a bunch of cash into it in hopes of winding up with a winning lottery ticket.

That's not the way to go no matter where the market is heading.

The way to maximize gain potential is always to cut out unnecessary risk, even when the type of investment you're eyeing is itself inherently more speculative than most of everything else out there.

Not All Risk Is the Same

There is a way to do this scientifically, and when done right, the results can be impressive.

The process is a step-by-step filtration that eliminates potential investment candidates by targeting elements of non-beneficial risk.

When applied to small, early-stage companies on the verge of the most aggressive growth periods within their life cycles, this is one of the most powerful speculative investment methods I've ever seen.

Use it during a time when the market is rising, and your chances of success go up even higher.

The method is simple, but it needs to be understood and followed closely.

To get you started, I've put together a brief video on how it's done.

Access it immediately, free of charge, by clicking here.