I just received a notice from Baltimore Gas & Electric asking customers to lock in low rates.

But these companies know damned well that natural gas prices are dropping...

And that translates to cheaper utility bills for you and me.

Truth is, we won't see high natural gas prices over the next year — unless we see a brutal winter. 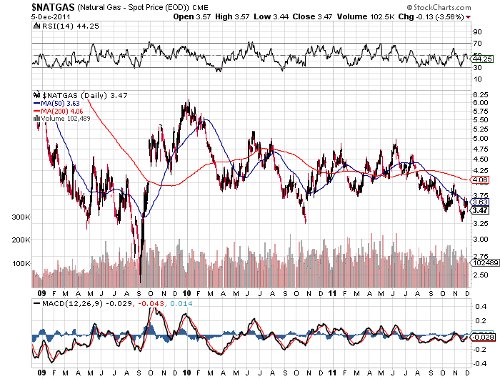 "Customers shouldn't be worried they need to lock in a long-term contract. You're just buying an insurance policy you don't need," says Robert Stitt Black, president of Waterville Gas & Oil.

Part of the reason for this is the amount of natural gas coming from the Marcellus shale — so much so that analysts at Raymond James are cutting 12% off their 2012 natural gas price forecast, believing supply will “smother anemic demand.”

They cut their previous $4/Mcf forecast by 50 cents to $3.50, and have said prices could fall even further...

“[We] don't see demand being able to catch up with supply anytime soon."

Thanks to a new domestic energy boom unmatched since the 1970s, we're seeing an energy renaissance spreading from coast to coast. 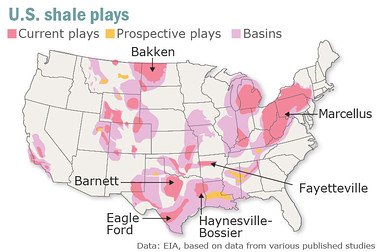 The boom has prompted the Financial Times to declare: “Many analysts expect that in the coming decade the U.S. will leapfrog Saudi Arabia and Russia to become the world's largest producer of hydrocarbons.”

It's why we've been all over the Marcellus Formation, where only one percent of wells has been drilled so far.

There's a potential for 200,000 wells, which would create thousands of jobs and bring significant wealth to the region.

In fact, landowners in the Marcellus region are already seeing tremendous riches...

Hydraulic Fracturing: Making It All Possible

Analysts don't see any end to our supply glut — at least, not in the near term — and they don't see sustainable natural gas price spikes.

“This ability to accelerate development in the right economic environment could be viewed as an effective cap on future gas prices,” he said, though the cap would be relative to the price of oil and would be much higher than current natural gas prices.

And it’s all thanks to hydraulic fracturing.

Without this technology, we would have never reached the billions of barrels of oil and natural gas that lay beneath our feet, trapped in shale.

And the Marcellus isn't the only region cashing in on the resources beneath American soil.

Further west, new discoveries and drilling activity are the catalysts for New American Boomtowns cropping up in North Dakota and Montana.

A once sleepy corner of North Dakota is now a place where jobs outnumber people...

Where a teenager with no prior employment history can move — and be working a $90k-a-year job by the beginning of next week...

The key to it all lays buried just inches underneath the loose soil.

Twice as rich as the Saudis' national reserves, the world will very soon depend on this 100% American mega-resource the same way it once depended on the Middle Eastern oil dynasties.

If you haven't heard about what's going on in the Bakken region by now, you must be living under a rock.

Resident oil guru Keith Kohl has been all over the Bakken since 2007, profiting from every major move...

To get complete articles and information, join our newsletter for FREE!
Plus receive our new free report, "How to Make Your Fortune in Stocks".

Stay safe out there,