It’s pretty easy to be a stock market bear. Recessions, contractions, and pullbacks are inevitable. So you just have to say one’s coming long enough, and you’ll be right.

Those bears have been out in force lately. You’ll hear them point out how they’ve called every single market downturn in the past. But you sure won’t hear them admit that it took decades, in most cases, for markets to do what they said would happen.

But the thing is, recessions are a part of the stock market like death is a part of life. I can predict with 100% accuracy that everyone alive today will be dead in the future. But I sure can’t tell you exactly when everyone will take that last trip.

That’s why it’s always your best bet to be prepared for anything. Be it life or investing, you’ve got to be ready for what’s inevitable — even if you don’t think it’s going to happen for a while.

And my portfolio is similar. I’ve got momentum stocks to capitalize on stock market rallies. I’ve got value investments that I plan on holding for decades. I always keep an allocation of dividend-payers in case I need some extra income.

So today, in light of all the talk of a coming recession, I want to help you get your portfolio ready for whatever is going to come next.

You see, there are a handful of industries out there that typically do even better during a market or economic downturn. It sounds completely backwards, but when people stop spending money, these companies make their best sales.

To find these companies, all you have to do is ask yourself a few simple questions:

They sound pretty silly, don’t they? But investors forget to ask important questions like those every single time we head for an economic slide.

If they took a little time to ask (and maybe chuckle at the absurdity), they’d be insulated against stock market declines and set up to make more profits than anyone else on the way back out of the trough.

So now let’s take a look at the five best stocks for beating a recession and protecting your profits.

Discount stores are always making lists of recession-proof stocks. People might not buy lots of luxury items during a recession, but people still need things even if times are tough.

And when times are really tough, shoppers on a budget tend to head toward dollar stores rather than big-box stores like Walmart.

The reason: While you can get a great deal on cleaning products at Walmart (probably cheaper than at a dollar store), you can’t get them in small quantities. You’ve still got to pay $20 for a box of soap. But at Dollar General, you can get just as much as you need right now — for a dollar.

People who don’t have space to store extra stuff or don’t have that $19 extra to get the value pack are going to spend a little more per ounce but are only going to have to shell out a buck for their cleaner.

And you can see how well Dollar General performed 10 years ago as the U.S. economy spiraled down the drain: 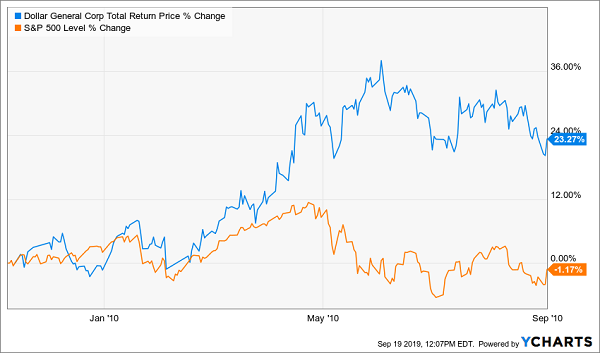 If we’re headed for another recession, this is a company you want in your corner. Not only does it cushion your account from losses and recover faster, but it also pays a steady and secure dividend.

To answer my second question, you’re probably going to continue keeping clean whether there’s a recession or not. And that’s why a company like Clorox is such a good bet.

In the last recession, Clorox shares dropped a little, but nowhere near as much as the broader market: 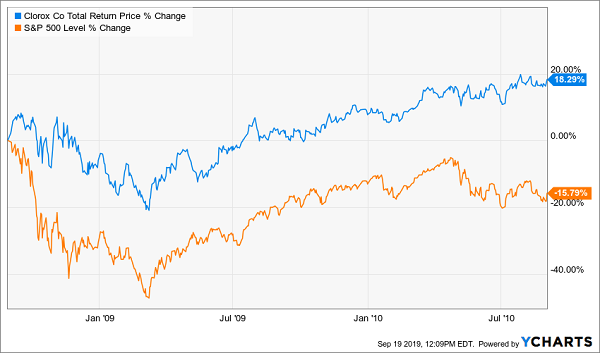 And it has paid a steady dividend for decades. Plus, it has a 41-year history of annual dividend increases. It even gave investors a raise in 2009.

So you’ve got a smaller drop, a bigger rise, plus extra income flowing into your bank account. And that’s no matter what the markets are looking like.

Recession or not, people need a roof over their heads. And when times are tough, most are thinking about how to keep their current roof around. They’re not thinking about buying a new one.

That’s why home improvement stores tend to do better during recessions. People are more likely to try and fix that leaky faucet themselves rather than call a plumber.

And homeowners (and landlords) are more likely to make repairs on existing dwellings than go out and buy or build new ones. So Home Depot and Lowe's are good picks for a recession-resistant portfolio.

I’ve selected Home Depot over its competitor because of its history of outperformance. Lowe's is a great company and a solid stock to own. But over their shared lifetime, Home Depot has rewarded shareholders far better.

And during our last major recession, that story was just as true: 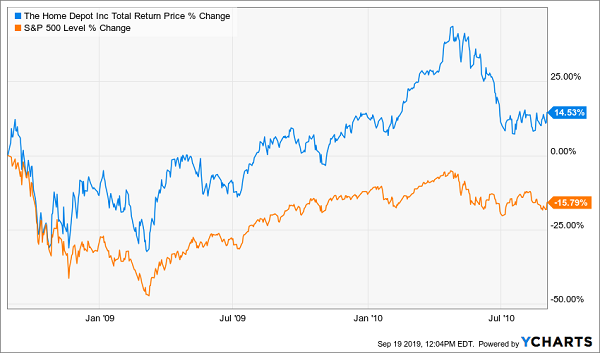 Home Depot dropped half as much as the broader market. And it recovered over twice as fast. By mid-2010, HD shareholders were up more than 25% despite holding shares through the worst drop in company history.

It doesn’t fall as far or as fast. It recovers quicker. And, again, it guarantees you’ll get paid with a steady and rising dividend payment.

Remember when I had you ask about a new car during a recession? Likely you said no, you would not plan on buying a new car if we go into a recession.

That means you’re going to have to keep the one you’re driving now on the road a little longer. And since you’re on a tight budget, you’re probably going to try to do as much of that work as possible.

And there’s the reason auto parts stores tend to beat the market when times are tough. People want their cars to last longer. So they spend a little more on regular maintenance. And they’re trying to pinch pennies, so they’re more likely to become shade-tree mechanics than head over to Jiffy Lube and pay a technician.

And the charts from the Great Recession show just how much money a company like O’Reilly can make during economic strife: 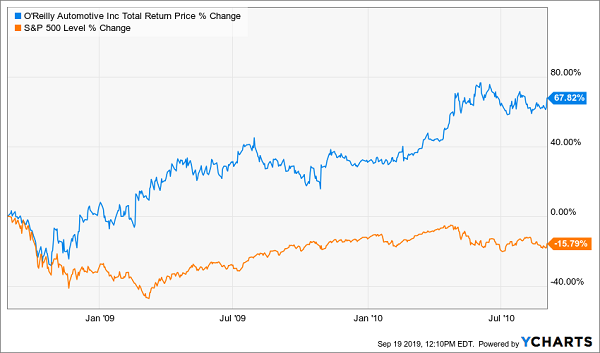 O’Reilly dropped right along with the S&P 500 for a few months. But it bottomed out nearly a half-year earlier at a 15% loss. Then it turned around and blasted off well before the S&P stopped falling.

By September 2010, O’Reilly shareholders had sat through a 15% drop but were still looking at 68% gains. And the S&P had barely crawled back to a 16% loss.

Unlike my previous recommendations, O’Reilly doesn’t pay a dividend. But when it can grow your profits by nearly 70% as the markets keep on falling, does that really matter?

That’s why companies that help us deal with all that garbage are such a smart bet for a recession-resistant portfolio. People make trash — whether they’ve got lots of money or just a little money. And we don’t like looking at or smelling said refuse.

So I can nearly guarantee that while you might cancel your Netflix subscription or stop paying to have your yard cut weekly, you’re not going to cancel your trash pickup. Nobody was doing that in 2009: 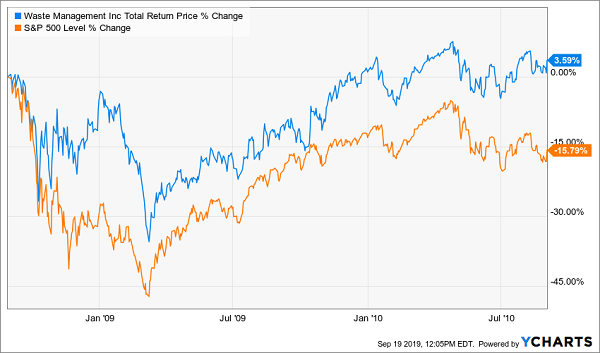 Granted, it didn’t soar like my other recommendations after the recession. But it never once dropped as far as the broader market. And by September 2010, it was beating the S&P 500 by 123%.

It also kept investors’ accounts flush with cash as it continued to pay and hike its dividend all the way through the market drop.

Recessions are going to happen. So are rain, snow, death, and taxes. But nobody can accurately predict when or how until they’re already happening or already past.

That’s why everyone needs to be ready for anything. Your portfolio should have companies that are going to soar in bull markets. But it should also have some hedges against recessions.

That’s exactly how my partner, Briton Ryle, and I have set up our investing community’s model portfolio. And throughout the course of 2019, as markets fell and rallied and fell again, our average gain barely dropped below 70%.

That doesn’t mean some of our stocks didn’t drop. Some did. But thanks to our balanced investments, our defensive stocks rallied and at times our overall gain rose as the market fell.

That’s what you want from a portfolio: one that can go up far faster than the market but also one that drops far slower.

If you’re interested in learning more about our investing community and our wildly successful portfolio (it has beat the market every year since we founded The Wealth Advisory).

You can learn how we do business and get all the details on one of our most lucrative investments.

If you decide to join us, Brit and I will be there to help you every step of the way.

But if you decide you’d rather wade into these uncertain markets alone, then please take the advice I just gave you to heart before the next recession really does come.