Why the Rich Don’t Care About Crashes

Last Wednesday, multi-billionaire hedge fund manager, Bill Ackman was on CNBC crying about how terrible our situation was and how the president needs to shut the country down for at least a month.

He wasn’t worried about people getting sick. He was trying to make himself even richer... those were tears of joy.

While Bill was lamenting the market rout and pleading for the president to shut down the economy for 31 days, he was watching his profits grow every time the market dropped. And he was helping the markets continue to fall with every word out of his mouth — and every crocodile tear that formed in his lying eyes.

Halting the economy for another month would only make him richer.

But after the president stated that he’d like to get everything back open by Easter, Ackman saw his scheme had run its course and closed the $27 million bet he’d made against the market while pocketing $2.6 BILLION in profits.

You can watch his teary-eyed interview on CNBC from March 18 here.

And you can read the letter he sent to shareholders bragging about the gain just a few days later here.

The Media Doesn’t Care About You

There are two lessons we should take from this. The first is "don’t trust a thing you hear on CNBC." It's fronted by multimillionaire hacks pimped out by billionaires to say what they’re paid to say. And its guests typically lie straight to your face — if it’s beneficial to them.

Ackman said that the virus was likely to drive hotel stocks to zero. Meanwhile, his hedge fund was loading up on them at a discount.

Those people on TV are there for one reason — to make money off you. They’ll tell you to skip buying coffee or pack a brown bag lunch, then break for commercials that encourage you to drop $40,000 on a new car or take a luxury “foodie” vacation through Europe.

They’ll tell you the world is ending and to sell off everything so that they can buy it from you on the cheap and make money selling it back when they tell you all is now well with the world.

They don’t care if you sink yourself into insurmountable debt or if you ever retire. They just care that you buy the stuff their sponsors pay them to sell and that you help them get richer.

The Rich Don’t Care about Crashes

The second lesson is that the rich don’t care about market crashes because they’ve got the strategies you need to be able to lose everything one day and then make it back plus some the next.

U.S. markets lost over $11 trillion in capitalization while Ackman was raking in billions. His clients, all multimillionaires and billionaires in their own right, made a pretty penny as the rest of us saw 30%–40% of our retirement accounts (that you can’t sell short in) wiped out.

But even if they weren’t able to bet against the market as Ackman did, they still wouldn’t care about market crashes because they don’t live and die in the stock market.

The super-wealthy, the people I used to call my clients at Morgan Stanley, they don’t hang their hopes on publicly traded stocks because they know the secrets to make millions without them.

When I was in school finishing my degrees, I thought the same thing you probably think. These people were super-wealthy because they invested wisely. They made bold trades with big bank accounts and saw the stocks go up tons.

But after I graduated and made my way to Wall Street, I found out I was incredibly wrong. Sure, our clients still traded stocks and bonds, but the real currency they valued above all others was information — information I became privy to while attending corporate retreats, back-office meetings, and client visits. It was like having a backstage pass to the world of the billionaire-elite.

I learned all of the strategies and tricks they used to stay rich and powerful. I found out why they could afford to lose everything one day and how they could make it all back (plus extra) the next.

And I paid close attention because I knew my time on Wall Street would be short-lived.

At first, I loved the action… and the money (I’ve got to be honest or I’m no better than the shills on CNBC). But the long hours and cutthroat culture (some of these guys would throw their grandma under an actual bus to make a buck) eventually took its toll.

I like seeing the sun. And, while I got into finance so I could get rich, too, I wasn’t OK with getting rich by making other people poor.

So, I left that world, and I never want to go back.

Making My Risk Your Reward

I gave up a massive salary and the potential for even bigger bonuses so that I could start helping people who needed help, not the billionaires who just wanted another billion dollars.

But, before you go thinking I’m a 100% altruistic humanitarian, let me make something clear: The money I made at Morgan Stanley made it easier to say goodbye to Wall Street. I wasn't leaving a job stocking shelves at Target. I was leaving Morgan Stanley. I had a cushion if things didn’t take right off.

But it was still a pretty big risk. I left the second biggest investment bank in the world to start my own company. A lot of sad stories have started that way.

Fortunately for me, the strategies I’d picked up at Morgan Stanley while helping those millionaires become billionaires work just as well for folks without outlandish piles of money to throw around. And my business started to take off.

At the time, I was just helping family and friends and any advertising was just word of mouth. But word got down to my old home in Baltimore, and the owners of Angel Publishing (Wealth Daily’s parent company) reached out to schedule a meeting.

We met, and I realized I’d found a company that shared my vision. They believed that you can only succeed if your customers succeed, too. They believed that the secret to success was sharing that success. And they believed everyone, no matter how much money they have, should have a chance to excel.

And the rest is history. I merged my company with our flagship investment advisory service The Wealth Advisory. And I’ve been with Angel, happily helping folks like you turn their finances around, ever since.

I took a huge risk when I left Wall Street... but it paid off for me, and I want to make it pay off for you, too…

So, I took the best tips, tricks, hacks, and secret strategies I learned in my time at Morgan Stanley, helping billionaires like Elon Musk grow their wealth even bigger, and I put them into a book: Endless Income: 67 Hidden Wealth Hacks Used by the Ultra-Rich. 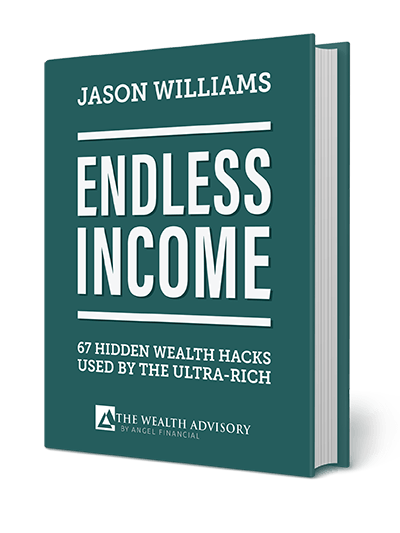 Normally, anyone who still worked on the Street and gave out this kind of information would be blacklisted and barred from working at an investment firm again.

But like I said, I’m through with Wall Street. And I have no desire to work for Morgan Stanley, Goldman, Merrill, or any of their friends.

I’m not worried about becoming a pariah of high finance because I already cast myself out.

And with the stock market extremely uncertain on which direction to move, now more than ever, investors like you need the resources in my book. So, I’ve gotten our publisher to allow me to send out emergency copies of my new book to all of my loyal readers here at Wealth Daily… 100% free.

I told you I left the big paychecks and bonuses of Wall Street to help people who needed it. And I’m backing that up with action by giving my book away to Wealth Daily readers.

I will not try to sell it to you, although I could easily charge more than $100 a copy. I’m here to help. And taking your money when you’re not sure when more will come in ain’t helping anyone.

I want you all to have a free copy of Endless Income so you can take advantage of the same strategies my super-wealthy clients at Morgan Stanley used to maintain their status in the billionaire-elite.

Take a little time this weekend to read it thoroughly and start making extra income immediately.