Why Our Cities Are the Dumbest in the World

If you're like most, you've probably heard the term "smart city," before... And you might even know a bit about what constitutes a smart city.

"Smart city" is a term that refers to an urban environment with heightened levels of technological integration and logistical autonomy.

This means things like universal free wireless internet, autonomous or nearly autonomous accident detection and traffic control for the roads, high levels of automation in the buildings and public areas, high levels of video surveillance, dramatically decreased emergency service response times, a new benchmark for sustainability and carbon emission control, and a host of other features made possible by next-generation wireless internet.

The smart city is not one thing. It is a combination of thousands, even millions of working parts, with everything coming together as one giant electronic organism.

And the money being thrown at the idea is getting pretty substantial. 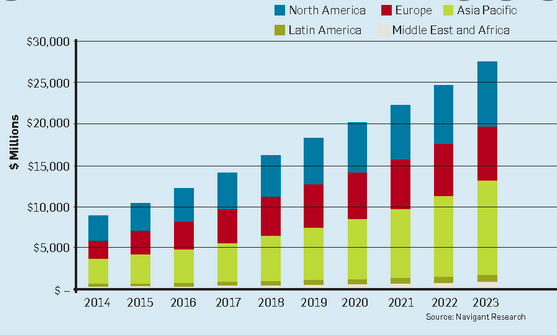 In the end, these new civil networking masterpieces will help us all live safer, healthier, longer, more enjoyable lives.

Pretty beautiful, really... Unfortunately, there are two major problems for us.

Why Are We Lagging?

First of all, as far as advanced, wealthy nations go, we're pretty much dead last in the race to make this vision of the future a reality.

As of last year, of the world's top 10 ranked smart cities, only one American city even placed: New York — at No. 10.

Singapore took the No. 1 spot, with Helsinki, Zurich, Auckland, and Oslo following, in that order.

San Francisco, believed by the whole world, it seems, to be of some importance in the world of tech, slipped from No. 12 to No. 27 between 2019 and last year.

The Chinese now own more than one-third of smart city patents (video surveillance, not surprisingly, being among the top individual fields), with State Grid Corporation in the top spot for single patents held, at 7,200.

South Korean firms own another 25%.

So yes, for our fragile American pride, that's not an easy one to take, but it actually gets worse.

The bigger problem here is that the smart city I described at the beginning of this is a myth.

You heard me right: It's a myth. A fallacy. A smokescreen. A made-up concept designed to mislead.

The fully integrated smart city, you see, is simply not feasible with today's technology.

The problem is as basic as heat overload and maintenance sustainability — two things that, without a fundamental change to current technology, simply will not allow for millions upon millions of smart devices to work together for years on end without the need for a repair or a battery swap.

To make that happen, data storage will need to be reinvented.

We will need cheap, reliable devices that will be able to function without external power, and without the touch of human hands, for longer than most current digital devices are expected to function with regular charging and maintenance.

It sounds crazy, but that's exactly the sort of technological hurdle we face if we're to make the society of the future a reality.

There's a company out there today that does have the solution.

Best of all, though, is that this company isn't based in some potentially hostile, economically and politically aggressive superpower halfway around the world.

It's based in Arizona, right here in the U.S., which means that once the smart city initiatives begin in earnest in the States, this company will be perfectly positioned to bring everything required to make even the most ambitious visions a possibility.

The company is small, just a little over $110 million as of this morning, but the market it's going to disrupt is worth hundreds of billions of dollars in the States alone and trillions across the globe.

Which means that investors who find it now will stand to gain the most.

As the summer trading (or lack thereof) season starts to draw to a close, some of the year's best entry windows are starting to open.

This company's stock, which trades on the Nasdaq today, has been hit by the post-COVID summer blues just like the rest of the field.

And that makes right now maybe the best time ever to learn more about it.

Get the full story right here, in my instant-access video presentation.

It's free of charge and requires no sign-up... but what you learn could change your life.