Just over a year ago today, I penned an editorial to Wealth Daily readers praising Walt Disney Co. (NYSE: DIS) as a compelling long opportunity for investors.

I was colorful enough in my wording at the time, saying that the company would “become an absolute monster” if it were to complete its acquisition of major 21st Century Fox assets.

Today, in the wake of that acquisition, the stock is bordering record highs around $140 and is up roughly 39% since I made my case. No doubt it’s been a monstrous year for Disney as the company positions itself to become even more of a media giant than it already is. 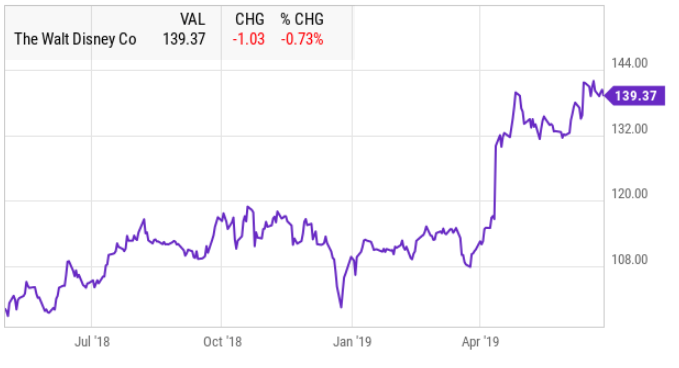 That said, I have to admit I’m feeling significantly less bullish on Disney shares today than I was 13 months ago, for a couple reasons.

Not only is Disney’s share price less attractive at this point by matter of valuation, but with the Avengers franchise now in transition, plus an underwhelming Toy Story 4 release, the company has had some wind taken out of its sales (at least in the near term).

Frankly, I don’t have a clear picture of where the stock is going from here, so I’m backing off my bull thesis for the time being.

Regardless of the future price direction of Disney, though, I am feeling increasingly certain about a related thesis, and that’s the short case for Netflix (NASDAQ: NFLX). Full disclosure, I plan on playing Netflix’s downside by entering into a number of put contracts in the near future, and I’ll explain exactly why below.

Netflix: An Obvious Short for 2020

When Netflix first announced its video streaming service back in 2007, the company enjoyed what those of us in the investment world call first-mover advantage (FMA). As an early entrant, Netflix managed to occupy a significant portion of the video streaming market for over a decade, controlling many of the resources needed to operate as a major streaming provider (namely content and data center distribution).

Until now, in other words, Netflix has enjoyed the luxury of little to no competition. This has allowed the company to dominate by measure of global market share and to gobble up virtually all the growth in the SVOD (subscription video on demand) market.

Early-mover advantage, though, is often overvalued in the long run. Put yourself 50 meters ahead of Usain Bolt on the 200, and he’s still going to crush you before the finish line. The same concept applies to business, as we’ve seen countless times before.

Nokia had FMA on cell phones, but Apple eventually took it over. Myspace had FMA on social media, but the company is now a relic in the wake of Facebook. We all know the allegory of the tortoise and the hare, and in this case, I believe Netflix will turn out to be the latter.

Consider for one that although Netflix continues to add to its subscriber base, Hulu (now fully controlled by Disney) added twice as many U.S. subscribers as Netflix in the first quarter of 2019.

Consider also that Apple TV+, WarnerMedia’s new streaming service, and Disney+ are all preparing for fall launches. Further, NBCUniversal plans to launch its own streaming service in early 2020, after pulling the highly acclaimed series The Office from Netflix earlier this week.

With so many new SVOD services hitting the market over the next six months, not to mention rising competition from Amazon and Hulu, it’s fair to assume that Netflix’s growth will begin to slow. The company itself warned of this in April, which is probably why the stock has remained effectively flat since March: 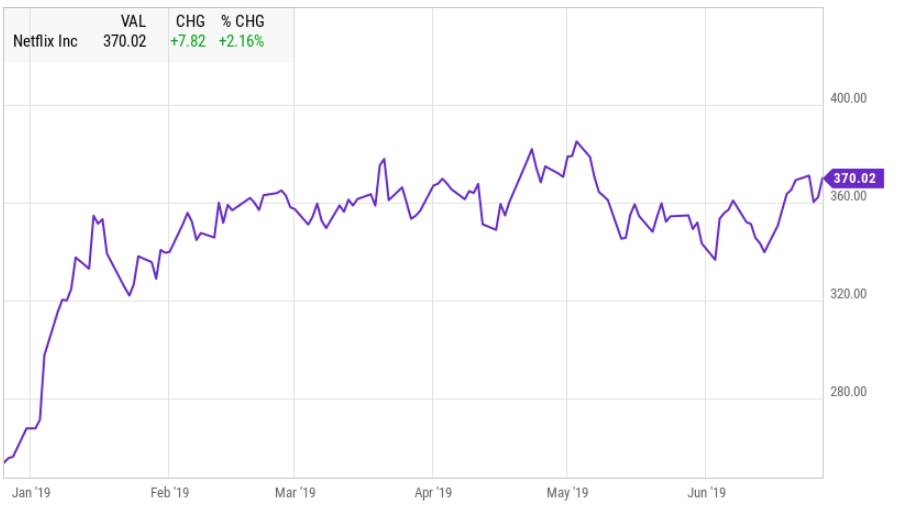 As you can see in the chart above, Netflix is having serious difficulty breaking out of its current range. It looks like the company will need some kind of upside catalyst to push it past $385, but this seems unlikely given the looming competition. Possible, of course, but unlikely.

Now, I’m not a die-hard technical analysis guy, but confirmation is always nice to have, particularly on a short thesis, so I hit up my colleague Christian DeHaemer to ask his opinion on this chart, and he said it looks to test $220. In any case, we both agreed there’s limited upside on the stock right now.

(Shameless plug: DeHaemer has a time-sensitive opportunity he’s been pitching surrounding the U.S. energy sector. I’m going to return the favor by linking you all to that opportunity here.)

Speaking of charts, I’ll leave you with one last thing before I sign off: 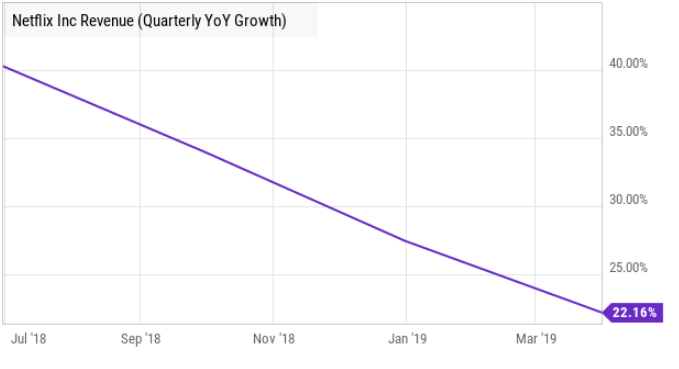 That’s the quarterly year-over-year revenue growth for Netflix over the last 12 months. It’s practically a straight line down, for a company valued at 10.6x sales and 132.1x earnings. These valuations metrics are simply insane.

If you’re not shorting this company, the very least you can do is not own it.

P.S. My colleague Jason Williams also presented his bear case on Netflix earlier this week, which I didn’t even notice until wrapping up this editorial. Two Jasons, two Netflix bear cases. Draw your own conclusions.

P.P.S. I know I’m getting overzealous on the plugs here, but Williams also has an opportunity on the fall of Netflix, which I believe is worth a link.