So, last week, I promised to give you all the details on my recent site visit to a cannabis company poised to go public.

Today, I’m sort of delivering. I say “sort of” because signals got crossed when I confirmed the planned IPO date.

I understood it would be next week. But the company went public last Thursday.

So, while you’re not going to catch the IPO, this time I’m giving you a brand-new company you can go out and buy today. I feel like that balances out my mistake a little bit.

If any of you speak Spanish, you know that when someone thanks you, it’s customary in most places to respond by saying, “De nada.”

But in Colombia, they say, “Con gusto,” or, “With pleasure.”

That’s because they really take pride in showing the warmth of their people.

Colombia, especially the city of Medellín, got a bad reputation during the 1980s and 1990s thanks to the growth of cocaine cartels and the intense focus of the U.S. war on drugs.

And since the Netflix show Narcos came out, Pablo Escobar and his fellow terrorists are starting to be romanticized by outsiders.

And during my visit to Medellín this week, that attitude showed very clearly. Everything I thought I knew about the city was debunked.

Medellín is one of the most beautiful cities I’ve ever seen. The temperature is never too hot or too cold. It’s known as the City of Eternal Spring.

The night skyline is truly majestic… 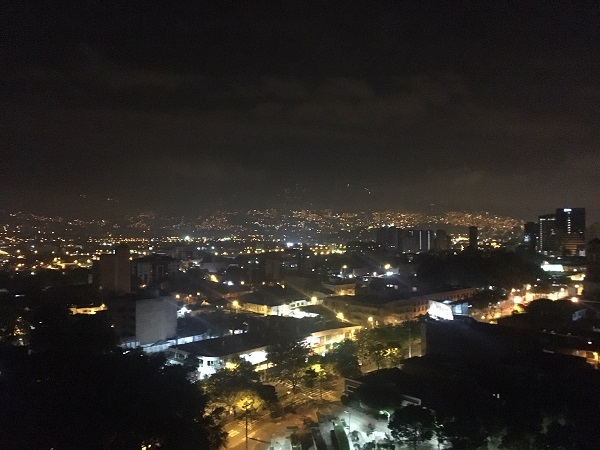 And the people were warm and amazingly kind and welcoming to me and my Colombian-Venezuelan-American girlfriend. As an aside, all of us on that visit owe her a gigantic thank-you. What an asset to have a native Spanish speaker with you, especially one who’s so willing to help all of us gringos.

The city is impressive, too. Most of its power is provided by a hydroelectric dam a few hours away. And the public transportation is some of the cleanest and most efficient I’ve ridden in the world.

There are new buildings springing up out of the neighborhoods. You can actually see the money coming into the city now that it’s shown how safe and welcoming it can be.

A lot of that money has been invested into the operations I got to see while I was there.

I’ve been writing about cannabis for a while. And I’ve been very successful in finding great investments in the industry. Apparently, word’s gotten out, and this company reached out to me to ask if they could bring me down to their farms so I could see the extent of their operations.

They flew me into Medellín and set up a daylong tour of the facilities. I can’t call it a farm; it was too sophisticated. This was a high-tech cannabis greenhouse operation. And it was impressive to say the least.

PharmaCielo has acres upon acres of cannabis already growing. And it’s got another 40 or so acres of property available for immediate expansion — the infrastructure is already in place.

And the way it’s doing the grows is very unique. It’s practically the only place you can do it like this, too.

Thanks to Colombia’s location near the equator, it’s a tropical climate. But it’s also home to some of the mountains that make up the Andes mountain range.

That keeps temperatures right around 70 degrees Fahrenheit all year. That’s perfect conditions for growing plants. And it’s why Colombia is one of the world’s largest exporters of cut flowers. But it’s also the perfect temperature for growing cannabis.

The location on the equator means Colombia gets 12 hours of sunlight and 12 hours of darkness all year. That’s the perfect light cycle for flowering cannabis plants.

Since it’s like this all year, the company can grow its cannabis every month. And it doesn’t have to use all those expensive lights to make days longer like they do in other locations.

That’s brought the cost per gram for this company way below anything we’ve ever seen. And the cannabis is some of the best in the world.

I can see this company growing to dominate the global cannabis export market. It can operate all year — that means four to five harvests every 12 months. And it barely has to pay to grow the plants. Plus, it’s already got distribution channels in place thanks to its place as the top cut flower exporter in the world.

As I said, PharmaCielo went public last week. So you can invest today if you want.

It’s pretty clear that I’m very bullish on the company. Its operations are the biggest I’ve ever seen. And the cumulative management experience is next to none. The location makes it the cheapest operation in the world, and the pre-existing distribution network makes it easy to dominate the global market.

The stock went public last week around $3 a share. But while I was down visiting, management announced that it had just inked a deal to export its cannabis products to Mexico.

I really like the company. But I can see that pulling back a little bit from there.

I’ve been wrong about these things before, though. Some cannabis companies ramp up from the IPO and never slow back down.

I personally am going to wait for a little pullback before getting some skin in the game. But rest assured, I’ll be investing with you if you decide to start a position.

No Need to Wait

If you are going to take my advice and wait for a dip to buy into PharmaCielo but you’ve got some capital you want to deploy today, I’ve got the perfect cannabis stock for you...

It’s been practically immune to the wild swings of the market. It outperformed all the major growers last year. And it guarantees to put money into shareholders’ pockets as long as it’s in operation.

You really can’t get much better. My subscribers are already up over 200%, and shares are racing higher as I type. But there’s so much more to go. This is the kind of company that can easily give you a 1,000% or better win... even after its amazing performance so far.

But the longer you wait, the smaller your profits will be in the end. You can get all the details and find out how to get invested in this presentation.

Or, if you’re ready to get started right away and don’t need to hear any more about it, you can skip the video and get your report right here.