On July 25, 2018, Facebook (NASDAQ: FB) stock closed at an all-time high of $217.50, representing a gain of more than 450% from its initial public offering (IPO) price. It seemed at the time like the most solid investment out of the whole social media pack.

Other industry giants like Twitter (NYSE: TWTR) and Snap (NYSE: SNAP) had seen their stock prices fall since their IPOs, reflecting concerns about the viability of their business models. But Facebook sported positive and steadily growing earnings, a high return on equity, and reasonable valuation ratios. What could go wrong?

A lot, actually. As we now know, the 2018 Cambridge Analytica data leak was just the first in a series of scandals, internal power struggles, and regulatory concerns that have caused Facebook stock to plummet over the last year. 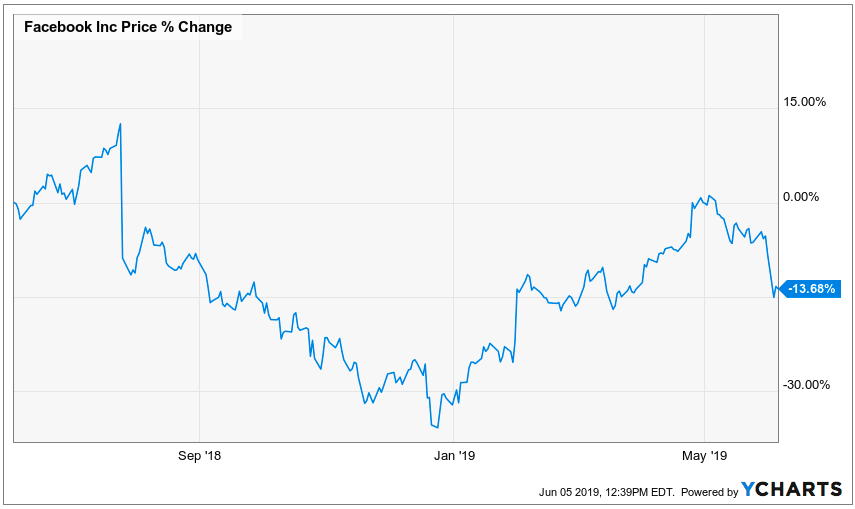 But what’s happening with Facebook, exactly? Why is the stock nose-diving for the second time in the last 12 months? And should investors be worried about the firm’s long-term future?

Let’s take a closer look at this former darling of tech investors...

To tell the full story of Facebook’s recent troubles, we have to start with the data leaks.

The Cambridge Analytica scandal — in which a British political consulting firm acquired and used the personal data of millions of non-consenting Facebook users — is the biggest and most well-known Facebook data leak. But it’s not the only one.

According to a Vice report, several low-level Facebook employees have been fired in recent years for using their access to private user data to stalk their exes.

More recently, a Daily Beast journalist exposed the identity of a man who created doctored video of Nancy Pelosi with help from a Facebook employee who had access to the culprit’s private user data.

These other leaks may be relatively small, but they carry a troubling implication: that Facebook is not doing much to prevent its 35,000+ employees from abusing their access to sensitive information.

All of those leaks got the public thinking about Facebook’s role as a monopolistic custodian (and seller) of our personal data. That, in turn, eventually led to another cause of Facebook stock’s recent plunge...

There are other social media platforms, but there is no other Facebook. The only other platform with a comparable number of users is Instagram, which is a Facebook subsidiary.

Given Facebook’s dominance and its borderline-Orwellian control over the personal data of billions of people, it’s not hard to see the case for antitrust actions against the company.

Chris Hughes, one of the company’s original co-founders, has said that Facebook should be broken up in order to bring competition and accountability to the social media industry.

The feds are starting to consider the idea, too. Last Monday, lawmakers in the House of Representatives announced that they were looking into possible anticompetitive behavior by Facebook and other major tech firms.

Facebook shares fell more than 7% on the day of the announcement.

Amid all this turmoil, Facebook shareholders are losing confidence in founder and chairman Mark Zuckerberg.

Last week, at Facebook’s annual shareholder meeting, a whopping 68% of shareholders voted to remove the 35-year-old programmer as chairman and bring in an independent board leader.

Facebook’s dual-class share structure, however, makes it impossible for shareholders to unilaterally fire Zuckerberg. Even though a majority of shareholders want him gone, Zuckerberg controls roughly 60% of the votes due to his ownership of Class B stock, and he was thus able to veto the proposal.

Nonetheless, the vote shows a massive disconnect between Zuckerberg and... pretty much everyone else about how Facebook should be run.

Facebook stock is certainly facing a lot of headwinds right now, but it is still a very well-run and reasonably valued company by most metrics. It has a lower price-to-earnings (P/E) ratio than most of its industry peers and a higher return on equity (ROE).

However, given the risks of more leaks, antitrust actions, and shareholder revolts, now might not be the best time to buy more shares of Facebook.

Investors who are looking to increase their tech exposure with less controversial stocks should check out Technology and Opportunity. Investment director Jason Stutman is beating the market by more than 20% year to date. Click here to learn more.