In 1996, Bill Gates wrote an essay titled "Content is King." It's a remarkably prescient piece that starts with this little chestnut:

Content is where I expect much of the real money will be made on the Internet, just as it was in broadcasting.

In it, Gates predicts that much of the content on the internet will one day run on a subscription model. Yes, he includes software as a form of content. Today, that vision is in full effect. (Though it's ironic that Gates' protégé, Steve Ballmer, wasn't the one to bring Microsoft into the subscription era. That task fell to the most underrated CEO out there today: Satya Nadella.)

I've been in the subscription content business since about the time this essay made the rounds. And I've watched the amount of useful free content on the internet dwindle steadily. In just the last six months or so, one of the last bastions of free economic/investment content put up the paywall: Bloomberg.

So I've got a rooting interest in the trend of investment research. In the wake of the tech bubble implosion in 2000, new rules were put in place that dramatically changed the way investment research was done. There's just not as much of the good stuff anymore...

Sure, you can find plenty on the large-cap stocks. But the best research on Wall Street is reserved for high net worth clients. By the time you hear that Goldman Sachs has added a stock to its conviction list, those clients have already loaded up.

You're just not gonna hear about an emerging superstar stock like Twilio (NYSE: TWLO) — which Wealth Advisory subscribers bought at $31.71 and which is now over $140 — from the Goldmans of the world.

The thing about Wall Street analysts is that they don't put "what ifs" into their earnings models for stocks. You can see why this would be so. Their bosses don't want to be held accountable for assumptions that don't pan out.

That's reasonable if you're a giant wuss and your high net worth clients only need to make 8% a year to stay in the 1%...

For instance, think back to the corporate tax cuts. Consensus was that a tax cut would be pretty bullish. Buybacks would increase, corporate investment would increase. You know how many analysts raised their earnings estimates for the S&P 500 or hiked their price targets for individual stocks?

Because they can't plug an imaginary number into a model. But once those earnings started coming in, it was a race to raise earnings estimates and price targets. Thanks for the head's up, ya jerks.

Here's another one. After first quarter earnings this year, Disney said it would give details about the coming Disney+ streaming service on April 12. Analysts said, "Okay, see you then." I said, "Hey Wealth Advisory subscribers, buy Disney before that day."

We're From Wall Street, and We're Here to Screw You

It's not rocket science. It's about rational thinking and honesty. We all know how much content Disney has. We all know Disney is a major owner of Hulu (Seinfeld, SNL, etc.) and also Fox (so it had stuff like The Simpsons). We've seen the success of the Marvel and Star Wars movies.

But Wall Street is still gonna tell you, "Oh, I don't know, Disney+ might not be amazing"??

You know how to tell if a Wall Street analyst is lying? Check out this Disney chart. You can see the "stealth buying" ahead of Disney's announcement plain as day... again, while Wall Street was telling you, "Oh, I don't know, Disney+ might not be amazing." (?!?) 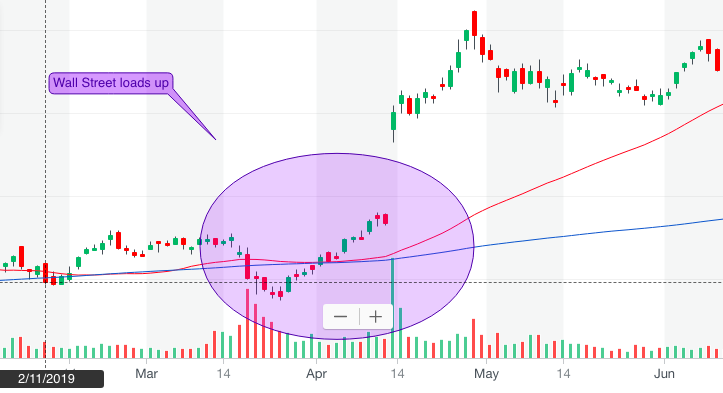 I'm not going to call it a bubble (because I don't like that word), but I will tell you that there will be some very big losers in the near future.

In addition to Disney+, AT&T is going to launch an HBO streaming service that will include a bunch of Time Warner content.  Discovery/BBC is coming. Original content from Apple TV is coming. Throw in existing Amazon Prime and Netflix, and it's a bit of a mess.

That is over $2 trillion in market cap. Obviously it's not all based on content. In Disney's case, its movie division did $10 billion in revenue in 2018, and ESPN did $24.5 billion (total revenue was ~$60 billion).

One of these companies is not like the others: Netflix. It doesn't own much. And Disney and AT&T are pulling their content from Netflix. Right now, Netflix is the big fish in terms of subscription revenue.

Over the last 12 months, the big fish Netflix did $16 billion in revenue. That's it. Granted, streaming content is an emerging business. Still, even if we multiply Netflix revenue by 10, it doesn't support the valuations we see above. Not even close.

Netflix is the obvious big loser. The small profit it reports is the result of accounting hocus-pocus — the company spends nearly all its revenue on (what else?) content and has negative cash flow.

Wall Street isn't going to tell you that. They're gonna let you think everything is hunky dory there until THE BIG ONE hits. But I guarantee you Wall Street and their high net worth clients are getting positioned now, just like they did with Disney.