We’re Buying "the Next Tesla"

And you can too!

Electric vehicle (EV) stocks have been on a tear since March, led by Tesla in the headlines and Workhorse in the charts. 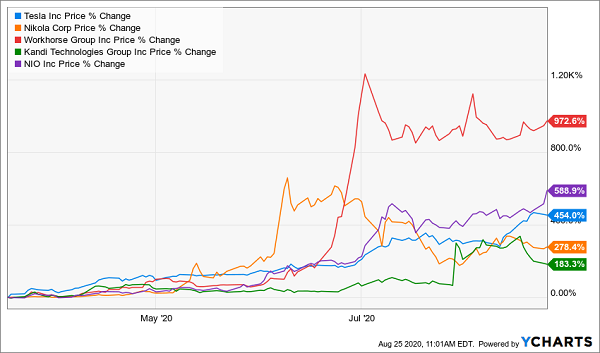 In just a few months, Tesla’s shareholders have gotten 454% richer and Workhorse investors have nearly hit a 10x gain. But they’re not the only two EV stocks racing up the charts.

Newly public Nikola is up almost 300%, NIO (the Chinese Tesla) is up nearly 600%. And even Kandi — a company with barely any revenue to speak of — is up almost 200% after announcing it will start selling cars in the U.S. soon.

It’s pandemonium out there. Prices are way higher than sales and earnings say they should be. It’s a bubbly-looking pattern. And I’m concerned that folks buying in now are going to be looking at a long, flat stretch as the best case and a big correction in the worst case.

But that doesn’t mean I’m not bullish on electric vehicles. Quite the contrary.

I do believe EVs will one day make up the majority of cars on the road. And I believe shipping companies looking to reduce environmental impact and cost of ownership will run fleets of electric delivery vehicles.

But I’m just not one to buy in at the top and make the already rich insiders even richer. I prefer to be one of those insiders selling shares to a public that’s frantic to buy EV stocks.

That’s exactly what my community of private investors and I are going to do today. And we want you to join us on what (according to that chart above) is all but guaranteed to be a wildly profitable ride.

If you find a good investment and you get there first, you’re going to reap the biggest rewards when everyone else realizes how good an investment it is.

It sounds pretty simple. But how do you know what a good investment is until you see everyone flocking to it? For a lot of people, the answer to that question is “I don’t.”

And that’s why stocks like Tesla, Amazon, and Apple are still leading the stock market higher. Nobody knows where the good investments are, so they’re just following the crowd to the ones that are going up right now.

But that’s not how you make the big bucks. You’re not getting there first. Even if you made a miraculous trade and snagged Tesla shares at their low point in March, you’re only looking at a 450% gain.

Sure, that sounds great. But let’s be honest, you probably didn’t buy at the bottom because you were waiting for the market to tell you if it was still a good investment.

Tesla’s earliest funding round was for $7.5 million. Those shares cost early investors $0.493. When the company went public, they were worth $17 (about a 34x return on investment).

But if those insiders held onto their shares, today they’d be looking at a 405,579% gain. And that $1,000 initial investment would be worth well over $4 MILLION.

That’s a massive windfall! It’s enough to retire early, fund a college account for your kids or grandkids, and still have some left over for a luxurious yacht!

And it really shows the power of “getting there first.”

"The Times, They Are A-Changin'"

It’s a little unfair of me to use Tesla’s early investors as an example of the money you can make investing before the IPO. That’s because when Tesla was still seeking private funding, you couldn’t invest in it.

Not just because you didn’t know the founders, but because there was a law against it. That’s right. For decades, there’s been a law forbidding all but the super-rich from investing in private companies.

But that’s all changed. Finally, the doors to this incredibly profitable market have been opened to everyone. And that means you can now invest in the next Tesla, NIO, or Workhorse… before it goes public and before all the massive gains have already been captured.

You see, Congress recently passed legislation called HR 3606. And through that legislation, it pulled back the curtain and lifted the velvet rope to the VIP section of the stock market.

Now, any adult can invest in private companies and capture the massive gains insiders at Tesla, Workhorse, and NIO made when their companies listed.

And today, I want to give you the opportunity to join in on the profits…

You see, I’ve spent my career building a network of connections in the corporate world. And I’ve spent decades analyzing corporate structures and financial statements.

I’m trained in accounting (you have to be if you want degrees in finance and economics). And I actually love numbers, which I guess makes me weird or a nerd, but I’m OK with that.

And I’m OK with it because it helps me sift through all the SEC filings, term sheets, and unaudited financial statements to figure out which companies actually have a future worth buying.

So I’ve founded an investment community that targets these kinds of opportunities. And I want you to join us as we invest in a company that could easily become the next Tesla (and not just because it’s involved in electric vehicles)…

Invest in the Next Tesla

This company we’ve identified is right about where Tesla was back when early investors scooped up those shares for less than $0.50. Actually, it’s even further along than Tesla was back then.

Elon Musk himself admitted that at Tesla’s earliest funding round the company was nothing but “three partners with an unfunded business plan and no trademarks, assets, or offices to their name.”

The company in question makes light-duty electric trucks. And unlike its multibillion-dollar competitors Workhorse and Nikola, it actually has a vehicle. And it can make that vehicle cheaper and faster than any of its competitors.

But it’s not trying to get to market with a sneaky reverse merger or special purpose vehicle that makes it easier to hide bad fundamentals (like Nikola). And it's not getting mentioned by hedge fund managers trying to talk up their investments on TV (like Workhorse). So investors haven’t caught on yet.

But when they see what this company is capable of, they will.

And this funding round will give the company the leverage it needs to really take off.

It’s already got offices and operations in both Europe and the U.S. And it’s expanding in India and Southeast Asia as I type.

I can’t go into too much detail here because I just don’t have the space. But I just sent out a full write-up and recommendation to my investors this morning.

Your Invitation to the VIP Section

So if you’re interested in getting in on the next Tesla before the 500,000% profits are already taken, click here to find out how to join us today.

I’ve put together a presentation on this market, the legislation that opened it, and the opportunities that are abounding in it. You can get access to that by clicking here.

But if you prefer to read about the opportunity, you can click here to get access to a special report.

I’m particularly proud of the presentation. My team and I spent a lot of time putting it together. So I’d appreciate if you give it a view. But I understand you might not have time for that.

So I’ve made sure the written report has all the same information so you can read it at your leisure.

Just don’t be too leisurely about it. These kinds of investments open and close very quickly. Sometimes they fill up in less than 24 hours.

So any delay can cost you not just gains of a few hundred percent but the entire opportunity.

That’s why I’m urging you to take some time out of your day today to learn how you can start investing in private companies.

I want you to be one of the early investors taking home a 3,000% gain at the IPO and watching as the rest of your investment grows to an Elon Musk-size fortune.

So click here now and learn how you can buy the next Tesla before it goes public and turn a $100 investment into a $1 million retirement account.