Uranium Sector on its Way Up

Apples Fall, VIX Gaps Up, and What I'm Buying Now

It looks like we are getting that well overdue correction today.

The financial interns who write for Yahoo! Finance are blaming Greece again... Bloomberg is scapegoating Goldman... and Zero Hedge claims it’s the fault of Obama’s Volt...

The Greek thing is preposterous and has been going on for far too long.

We all know Greece can’t afford its current debts. It can’t even pay the interest on bailout loans. Furthermore, it is a political impossibility that workers of Sparta will take a 50% pay cut.

It is also politically impossible that the Junkers in Prussia will pay for the sun-kissed slackers to the south. We’ve known this for almost two years now.

But in the end, we are talking about a measly $170 billion dollars — which is about ten minutes of Washington spending on a failed solar company.

It is meaningless in terms of Wall Street... but across the Atlantic, it’s a 24-hour news cycle.

Stock movements must be explained in a way that's more than stating the obvious, which is why there were more sellers than buyers.

During times like these — when the market themes get muddled and the government manipulates every number — it is good to step back and look at the big picture.

The Dow has had its first 100-point-down day in a couple of months.

The Nasdaq sold off as well, after breaking out to new heights. The stock that has been driving the Nasdaq is Apple, of course...

Where it goes, so goes the tech sector.

Take a look at its chart: 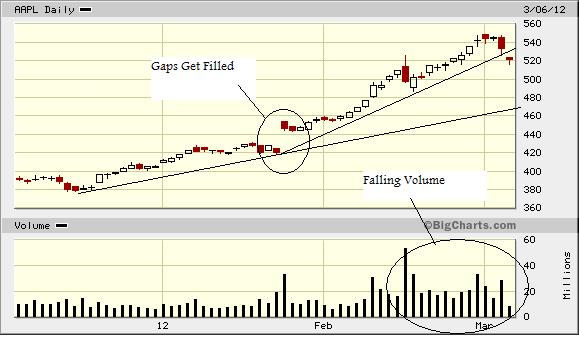 The VIX is often called the fear gauge.

It reflects the options activity on the Chicago Board of Options Exchange (CBOE).

The VIX shows how the smart money (option traders) are betting on the SP500 over the next 30 days. These numbers are then annualized.

That is, index options are priced with the assumption of a 68% likelihood (one standard deviation) that the magnitude of the S&P 500's 30-day return will be less than 4.33% (up or down).

The upshot is that when volatility is low or falling, the smart money buys equities because they don’t think there is a major correction imminent — and therefore, can’t make money on put options.

Over the past three months, the VIX has been falling, and just about every stock you could think of went up.

Today the VIX gapped up out of its range...

That is a sell signal. 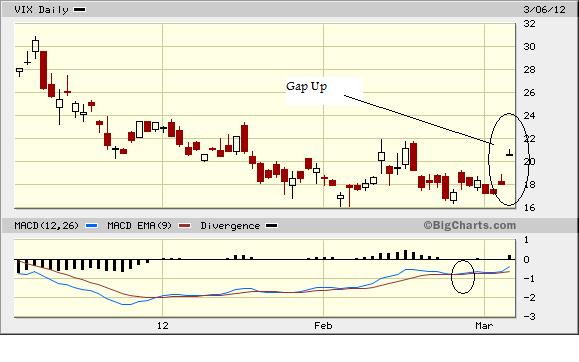 The trick is to turn to markets that no one cares about — you know, the ones that aren’t getting write-ups in the Wall Street Journal or on that meth head in suspenders' TV show.

As an aside, one way to see if a stock is overhyped is to look at the message boards. If there are no comments, it means all the buyers have yet to arrive.

Again, the goal is to buy low and sell high.

You want to buy value when no one wants it... and sell it when everyone thinks it's a sure thing.

Since the nuclear disaster in Japan, investors have shunned uranium.

Nuclear power must be the most hated industry on the planet right now. All the love is gone.

The price of uranium fell from $75 before the earthquake to $52 and got stuck. It hasn’t moved for months...

And yet, despite the headlines, places like Vietnam and China are going ahead with their multiple nuclear power projects.

At the same time, uranium mining companies can no longer get financing, and are merging and/or closing shop.

Uranium One (UUU. Toronto) is one of the survivors. They just announced revenue was up 62% year over year and hit a new record.

The company also reported earnings of nine cents a share compared to a loss of $0.25 last year. 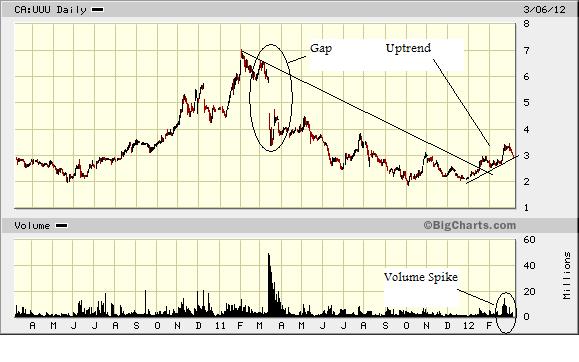 This stock could easily double — and fill that gap at $5.80.

Coincidently, the message board for UUU has tumbleweeds blowing down the middle of it.

The smart money is buying now...

We will sell it to the dumb money when it shows up in a couple of quarters.