Donald Trump's presidency is the best thing to happen for the gold market in years.

Everything Trump has done over the past week has been positive for gold. The Syrian airbase strike, increasing tensions with North Korea, and his comments on the U.S. dollar have all caused gold prices to swell nearly 3% in the past five days alone. 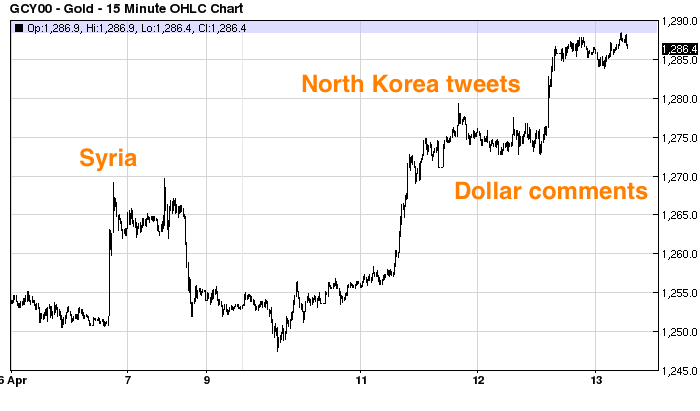 This is a trend we can expect to continue.

Increasing geopolitical tensions between the U.S. and... well, the entire world... will no doubt boil into military conflict somewhere. America's involvement in Syria is not over by far, and North Korea is a willing foe. And if it's not war with Syria or North Korea, be sure that someone will continue to challenge the Trump administration.

And remember, Trump is only 84 days into his presidency! So far Trump has only served 6% of his four-year term. He has plenty of time to make more political enemies through Twitter.

But geopolitical instability is just one of the catalysts preparing to launch gold prices into the stratosphere. In a Wall Street Journal interview on Wednesday, President Trump seemingly signaled he was also prepared to wage a currency war.

The U.S. dollar is already in troubled waters amid increasing distrust in the government and the Fed's monetary policies. But add to this increasing trade disputes with foreign nations, and the result is toxic for the greenback.

In the WSJ interview on Wednesday, President Trump said the U.S. dollar was overvalued. He said, “I think our dollar is getting too strong, and partially that's my fault because people have confidence in me. But that's hurting — that will hurt ultimately.”

With this comment, President Trump has seemingly launched into a campaign to do exactly what he condemned China for doing: competitively devaluing their currency, a.k.a. participating in currency war.

For a country, devaluing its currency increases the purchasing power of foreign buyers, meaning increased exports. The catch is devaluation also increases the cost of imports.

And it's vice-versa for revaluing a currency. Increasing the value of a currency will decrease the purchasing power of foreign buyers, meaning lower exports. But it will also decrease the cost of imports.

All this works well and good, with a balance. But when one or more countries find themselves in desperate need of fixing their trade deficit (like today), this tinkering can lead to an all-out currency war.

A currency war works like a price war. It's the repeated competitive cutting of prices below competitors'. In a currency war, central banks repeatedly devalue their currencies to undercut each other.

For some industries, like the airline industry, a price war can only drive prices down so far. But in the literal moneymaking business, a price war can lead currencies into oblivion because fiat money can be created infinitely. 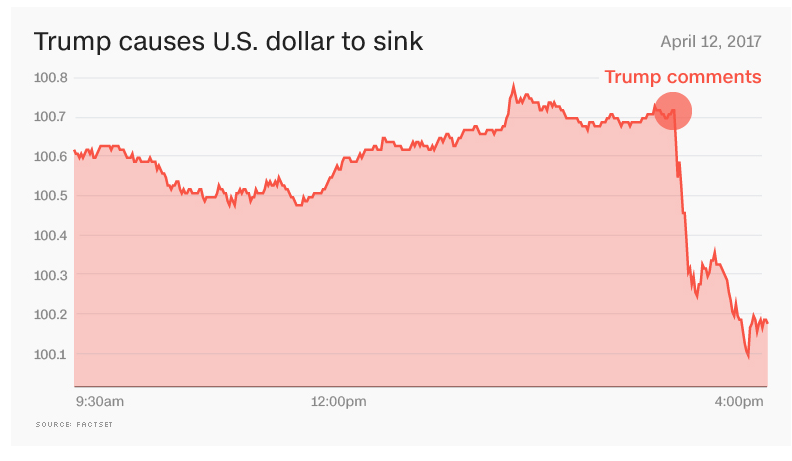 The drop was well justified.

President Trump has shown his willingness to wage battlefield war. And now, the WSJ interview shows his interest in fighting a currency war as well.

Despite being officially decoupled for over 45 years now, the price of gold still trades inversely to the U.S. dollar for the most part. Instability in the dollar will serve as a complimentary catalyst to geopolitical breakdowns that will continue to drive gold prices higher and the broader equity markets lower.

Buy physical gold bullion: Physical bullion is the most direct way to invest in gold. It can be purchased from retail coin and bullion dealers as well as online. However, be aware that there are price premiums attached to physical gold. And be sure to first secure a place to sell your bullion when it comes time to divest.

There's also a third war President Trump is preparing to wage right here in the U.S... and historical context shows just how bad it could get. Find out what it is and how to protect yourself.