It’s been a tough few years for uranium miners. The price of uranium has been falling since 2007. Back then it cost around $136 a pound. Now it costs a little more than $20.

The Fukushima nuclear disaster didn’t help. Japan went from producing over 30% of its energy with nuclear plants to shutting them all down practically overnight.

In the U.S., even though we still get around 20% of our energy from nuclear plants, there’s a lot of negative sentiment toward the idea of building new ones. Plus, our older generation of plants is forced to vie against super-low-cost natural gas and highly subsidized wind and solar operations. Many of them are shutting down because they just can’t compete.

All that has hit mining companies very hard. Their numbers have fallen from around 500 to just under 40. No joke — there are so few that I can actually fit them all into this article...

Last week, Paladin Energy (OTC: PALAF) joined the long and still-growing list of miners to throw in the towel. At first glance, that may seem like just a drop in the ocean. Over 400 companies have gone the way of the dodo. Why is Paladin so important?

Well, this company was THE darling of the industry during uranium’s last bull market. Investors could have scored millions of dollars with small investments. Every $1,000 invested at the stock’s low turned into $1 million just five years later.

Don’t think this is just a problem for certain companies or in certain regions. It’s been happening across the globe. And investors have been left out to dry. From Australia to the U.S. to Canada, stock prices have been plummeting — in some cases even faster than the price of uranium. 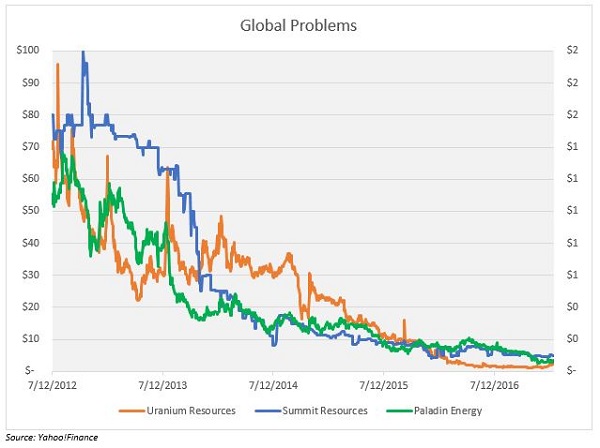 The entire industry has been hit and hit hard... 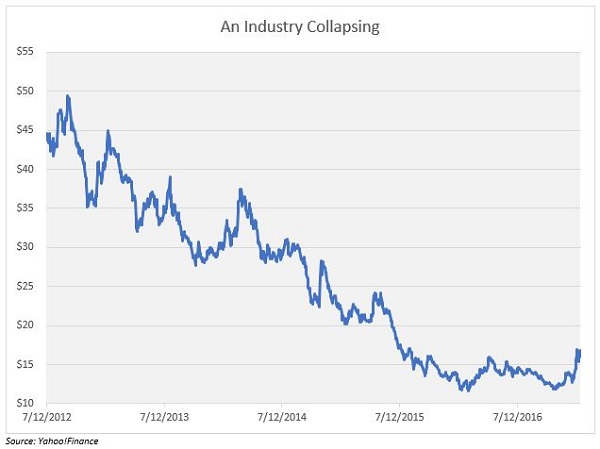 The ETF currently has stock in 21 companies. At this point that’s more than half of the uranium production industry. And thanks to the devastation in that industry, it’s had the dubious distinction of falling nearly 85% since its inception back in 2010.

Opportunity in Every Crisis

But this bankruptcy is also important because it could be the signal that a new bull market is coming.

With 500 mining companies producing uranium ore, the market got flooded. There was far more uranium being produced than ever before, and that means prices had to fall.

And what happens to smaller, weaker operations when prices plummet? We just saw it happen in the oil exploration industry. The little guys who can’t weather the storm either sell off to the bigger companies or get buried under mountains of debt and go bankrupt.

But in the circle of life that is the market, that leads to opportunities for the remaining companies. With fewer operations around to excavate the ore, less ore is coming out of the ground.

While demand was falling in recent years, that didn’t really do anything to support the price. But in the very near future, demand for uranium is set to increase. And there’s already a slight supply/demand imbalance going on now.

You see, the world consumes about 75,000 tons of uranium a year. But only around 73,000 tons is produced from mines. The difference is made up from countries like the U.S. and Russia reducing nuclear weapons stockpiles and selling the uranium cores on the open market.

But that secondary supply is going to run out soon. Right around the same time, demand is expected to increase.

There are 60 new reactors currently under construction around the globe. And there are around 170 new ones on backorder. Plus, Japan is going to fire up at least seven of its dormant reactors this year alone. That number may grow as high as 14 depending on inspection results.

That’s a formula for much greater uranium demand. And with far fewer miners to produce it, we are in a place where we may see a new bull market within the next few years.

Now, that’s not to say you should go out and buy shares of any uranium mining operation out there. For one, that’s just bad investing. And two, I’m not quite sure the rout is over. So, you need to be selective in your investments.

Look for companies trading at a discount to their net asset value. Also, look for low debt ratios. These are the stocks that are going to weather the rest of this storm and come out on top when the smoke clears.

Just to get you started, I have some suggestions. All are solid companies and will help you profit from the coming bull market in uranium. And there’s one for every level of risk-taking...

Uranium Play #1: BHP Billiton Ltd. (NYSE: BHP) — BHP is the bet for conservative investors. If you don’t believe me about the coming bull market but still want to cover your bases just in case I’m right, this is the stock for you. BHP is a huge company, and it’s got way more going for it than just uranium. So, if I’m wrong and uranium prices don’t climb back up, you’re well insulated by all the other operations BHP engages in.

Uranium Play #2: Global X Uranium ETF (NYSE: URA) — I know, it’s fallen so much. But that means you’re getting it at a super-discounted price. And now that all the weak companies have been thinned from the herd, it’s only invested in the best of the best uranium miners. It’s a little less conservative than a play on BHP Billiton, but it’s still very well diversified. If you believe what I’m saying about the coming bull market but don’t want to bet it all on one company, this is the investment for you.

Uranium Play #3: Cameco Corporation (NYSE: CCJ) — If you’re convinced (as I am) that there’s a massive bull market coming for uranium and you want just one company to bet on, this is it. Cameco is the second-largest uranium producer in the world. It produces more of the world’s uranium than any other competitor other than state-owned KazAtomProm. That makes it the biggest investible producer on the planet. It has operations across the globe, and it’s the single largest holding in the Global X ETF. The last time uranium went on a bull run, Cameco investors scored massive profits. A $1,000 investment at its lows would have turned into nearly $27,000 in just five years. 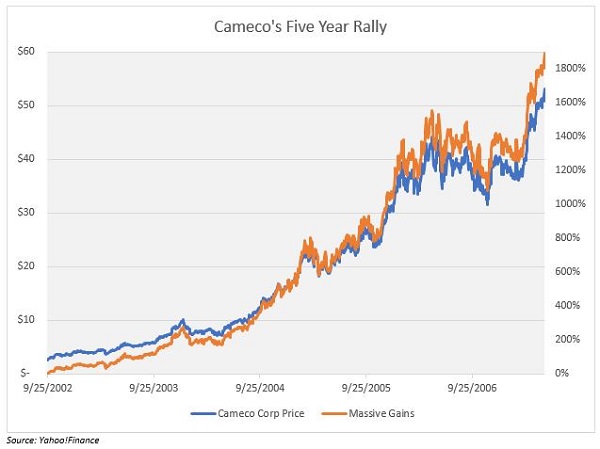 Those are the kinds of gains we could be seeing once this next rally culminates. Maybe even more, since demand for the mineral stands to grow to even bigger levels than in the last run-up.

So, there you have it — my top three picks for every risk level.

Once this rally kicks into high gear, investors in all three are going to see amazing gains. But, like I said, it may not come tomorrow or next week. So, make sure to wade into those investments. Pick a target for your total investment and put a little bit of it in every week. That way, you may not catch the exact bottom, but you’ll get the lowest average price possible.

To investing with integrity (and taking advantage of opportunities),