Theft, Lies, and the Illusion of Cheap Gas

Don't Fall for this Taxpayer Scam 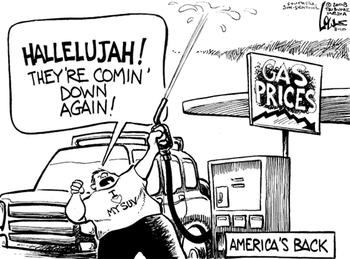 Oil broke below $50 on Monday.

The price at the pump has fallen below $2.00 in some locations.

U.S. consumers are buying gas guzzlers again, politicians from both sides of the aisle are trying to take credit for low gas prices, and flag-waving Americans are giving the proverbial middle finger to OPEC – completely suckered into believing that this new wealth of “cheap gas” is really cheap.

In 2013, fossil fuel subsidies in the United States were estimated to be as high as $52 billion.

I analyzed a few different reports and found that a more realistic estimate would be around $37 billion, with more set aside for oil. This, by the way, does not include costs related to military expenditures to protect fossil fuel assets and unaccounted externalities that allow fossil fuel producers to avoid bearing the public health and environmental costs related to their activities. What should really be an issue of property rights is hijacked by government incompetence.

Now before I go any further, let's first identify what a fossil fuel subsidy is.

This could include anything from tax breaks and giveaways to price controls, purchase requirements and loans at favorable rates. Rates, by the way, that you as an ordinary citizen could never get.

In one way or another, Americans do pay for these subsidies. As a result, when you fill up your gas tank, you pay a price at the filling station that does not represent the true cost of production, distribution and consumption. If you did have to pay a non-subsidized, free-market price at this very moment, you'd probably be paying closer to about $6 a gallon.

I've actually tried to find a per capita metric on this, but I've been unable to locate anything reliable showing what individual taxpayers shell out every year for these subsidies – both directly and indirectly. But maybe that doesn't even matter.

OPEC is not a Threat

While I don't deny that access to oil is paramount, I do question our reliance on it.

If a real free market truly existed, and we had to pay a price for gasoline that reflected the true cost of that gasoline, would consumer demand have already instigated a replacement or overhaul of the outdated conventional internal combustion engine?

Would the decentralization of food production be more common?

Would local economies be less affected by “cheap” labor in third-world nations?

I don't know the answer to these questions, but I do know that the market is a much more reliable gauge of success and failure when it's not contaminated by government meddling. But government meddling is exactly what we have when it comes to the energy sector.

Don't kid yourself. While the Solyndra debacle was a clear example of bureaucratic buffoonery and an obvious payoff for some very generous campaign contributions, it actually represents little more than an accounting error compared to the amount of money that's been pilfered and wasted on poorly-planned and over-budget fossil fuel and nuclear projects over the past five decades.

The solution to this problem, however, is not to plow more of our hard-earned cash into renewables and less into fossil fuels and nuclear. That would just exacerbate the problem.

No, the solution is to completely eliminate every direct and indirect subsidy that facilitates the movement of your money through the Department of Energy (and other various bureaucracies), then allows it to be redistributed to those who ponied up the most lobbying lucre in the previous election cycle.

Of course, I'm a realist, and I know such a thing is unlikely.

However, I would suggest that we, as free-market thinkers, use this “cheap gas” opportunity to educate those who think they just won some kind of gas lottery. Because mark my words, $2.00 gas won't be around forever, but energy subsidies will. And those subsidies, dear reader, pose a much greater threat to our economic freedom and liberty than OPEC ever will.