The World's Most Important Metal

There are a lot of essential elements that go into the creation and maintenance of the modern world.

Structural metals, such as iron and aluminum; technological metals like lithium, cobalt, and silver; and a host of others, without which industry, commerce, and our day-to-day lives would grind to a halt.

Some of these civilization-building elements have been with us, in constant use, for millennia — iron being a prime example.

But other members of this class of elements have only risen to prominence much more recently.

There is one metal in particular that has only been in mainstream industrial demand for the last 200 years.

Over the last 25 years, however, this metal has risen to become the most important element for the continued growth and evolution of modern society.

That explosion in demand has been fueled by the most powerful technological revolution in the history of humanity, with more and more of that metal being consumed on an annual basis than ever before.

Just one look at the graph below tells the story. 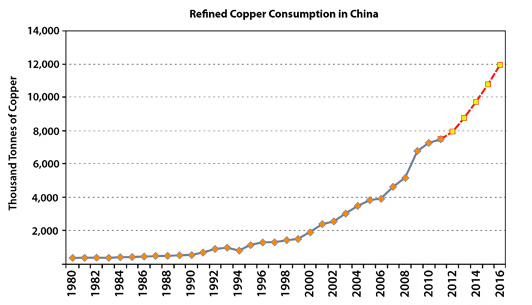 China, the world's biggest producer of electronic devices, has been a kind of "canary in the coal mine" when it comes to tracking the rising consumption of all raw materials essential to the production of modern consumer goods.

This historic rise is a direct reflection of the explosion in consumer tech demand across the globe.

With no end in sight, what was once a seemingly inexhaustible resource is now predicted to run out in the next several decades — perhaps as early as 2035.

If that sounds like an impending crisis to you, that's because it is... and a major one.

The Government Knows... And Is Helpless

To anybody in the know, it's also old news. The federal government, foreseeing this shortage as early as 1982, actually stopped using this special metal in the minting of coins — specifically the one pictured below. 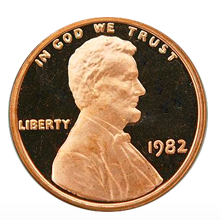 You've probably figured out by now that the metal I'm talking about is none other than copper.

From the earliest telegraph wires back in the early 19th century, on through to today and every single electronic device in existence, copper has been the one single constant.

It's still used heavily in just about all wiring, in all electric motors, in any electrodes found in countless consumer, commercial, and industrial machines.

It's the biggest rise in demand of a single commodity in the history of man... Unfortunately, the more we consume, the less there is remaining.

While prices have yet to start spiking, the frightening fact of the matter is, once that happens, it will already be too late.

The price of every electronic device and machine, not to mention every wire, is stable thanks to the stable price of copper.

That delicate balance will not last much longer, and once it goes, we'll all be feeling it in one way or another.

Rising prices in consumer electronics will be the first symptom of this systemic collapse, and it will be the subtlest. You'll start seeing things like skyrocketing prices for smartphones, for example... $1,000 iPhone ring a bell?

But with copper being an essential component of all electronics, that price spike will start to affect the cost of production of everything, from cars to food.

Copper demand is ramping up in 2017. Read our latest report on this valuable commodity. It will be the greatest free investment you ever make.

Join Wealth Daily today for FREE. We'll keep you on top of all the hottest investment ideas before they hit Wall Street. Become a member today, and get our latest free report: "How to Play the Rise of Copper."

Now, I don't like to throw around the word "crisis" very often, as I think it's overused as is.

But of all the things we fear today, be it religious extremism, anarchists, global warming, foreign hackers, or a nuclear warhead fired from North Korea, this is by far the biggest, most profound, and most predictable of them all.

Back in 1982, the feds bought us all some time by ceasing the production of pure copper pennies, switching to a 97.5% zinc/2.5% copper mixture instead to preserve the appearance.

Now, 35 years later, we're back at the brink, and this time, there's nothing to fall back on to put the supply and demand balance back into order.

All of this doesn't add up to a good scenario, ladies and gentlemen.

But if you're an investor, there is one light at the end of the tunnel.

In the next several years, we're going to see a new era of enlightenment in the copper mining industry.

Rising prices are going to push a slew of new companies into a slew of new projects, with countless dormant mines going back online as well.

One operation in particular, however, caught my attention.

As a Dress Rehearsal, He Built an Empire During a Much Smaller Bull Market...

It's a single company run by a guy who's been through a copper bull market before — about 13 years ago.

Back then, this man, a serial entrepreneur, spun a tiny copper mining company, worth less than $13 million, into a network of producers with a market capitalization north of $1 billion.

It took just eight years for his investors to take home 80x returns, which would have been a home run in most people's book, but this was seen as underwhelming.

What's coming this time around, as the bull market rages completely out of control, could be an order of magnitude bigger.

And so this man, already experienced in the art of empire building, has decided to repeat his process one more time.

He's already got the tiny company — the nucleus of the future empire — set up and engaged in its first major drilling programs.

Soon enough, though, the empire building will begin.

I recently spoke to this man and got the inside track on his plans and his vision.

It's information that could change your life, but for it to matter, you have to get your hands on it soon.