And while all of that sounds great, if you don’t really understand what 5G is (a category a lot of us fall into), then you’re really just taking a leap of faith with any investments you make, be those new phones or new stocks.

So, before I started investing in 5G, I wanted to make sure I really understood exactly why it was going to be so groundbreaking — and so profitable.

I talked to people who claimed to know. I heard them out, but I went away feeling like they really didn’t know, either, like they were just talking in circles.

After a lot more reading and after finding some real experts whose brains I could pick, I feel confident enough to give an elementary explanation of what 5G is and why it’s so great.

5G is the next generation of mobile broadband. Broadband is a way to transmit information wirelessly that uses a broad range of frequencies to send lots of messages at the same time. Frequency describes the number of radio waves that pass a fixed spot over a certain amount of time. There are high-frequency waves and low-frequency waves.

But why is 5G so special? And how are its differences so game changing?

A Spectrum of Possibility Profitability

Well, that’s where the spectrum comes into play. You’ve undoubtedly heard something about the spectrum I’m talking about. Most likely, it was a few years back when portions of the public part of the spectrum were being auctioned off to the highest bidder.

Spectrum is what you call all those radio wave frequencies that make up broadband networks. Those frequencies bundled together into broadband are what let us send text messages, tag friends on Facebook, Google obscure facts and cat videos, and all the other things we do with our mobile devices on a daily basis.

The full spectrum starts at three hertz (Hz = wave cycles per second), which is very slow, and goes all the way to 300 exahertz (EHz = 1018 hertz). That’s very fast.

The part of the spectrum used for communications is pretty small in comparison to the whole range. It’s from 20 kilohertz (KHz = 1,000 hertz) to 300 gigahertz (GHz = 1 billion hertz).

That range of the spectrum is broken up into bands of frequencies (hence "broadband") called low-, mid-, and high-band spectrum.

According to CTIA, “Each band of spectrum is essential for a different kind of communication and use case.”

Low-band spectrum (under 3GHz) travels longer distances without interruption. That’s what today’s wireless networks that cover 99.7% of Americans are built on.

High-band spectrum (above 24GHz) offers high-capacity (more data) and ultra-fast speed. But it doesn’t travel far at all — think yards instead of miles.

Mid-band spectrum falls between the two (3GHz–24GHz) and offers a combination of the two that provides a mix of coverage (distance) and capacity (speed).

5G is special because it can operate on three different spectrum bands. That’s going to be crucial to handle the advances in technology like driverless cars, smart homes and smart cities, augmented reality and virtual reality, and even cable-cutting.

Being able to harness all three ranges of the communications spectrum is what gives 5G its advantage. 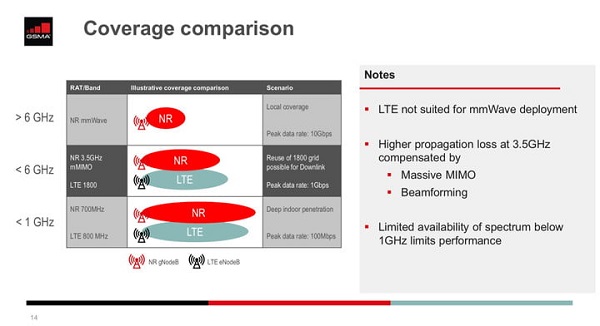 And being able to transmit lots of data at high speeds over long distances is what’s going to enable so many technologies to evolve so quickly.

I think that’s a pretty easy-to-understand breakdown of what 5G is and why it’s different from what we’re using today. With all of those technologies hinging on the successful deployment of 5G coverage, there’s a lot of money going into the field.

All of the national carriers — AT&T, Verizon, Sprint, and T-Mobile — are rolling out high-band networks, but for now, those will piggyback off of the existing 4G LTE network. That’s because they’ve still got to build the 5G ones.

You remember the high-band doesn’t travel very far. So, it can’t rely on the massive towers and equally huge antennae that power the current network. It relies on small cells, little antennae the size of a mailbox that will be mounted in places like street lights, building tops (or sides), and existing fiber networks.

Now, I think you’re due another explanation. I just said fiber networks. That’s something I had to look up, too. So, here’s the fifth-grade explanation: Fiber-optic cables transmit pulses of infrared light through an optical cable. The light forms a wave that can carry information. They’re used for high-speed communication and can also handle lots of data. Most of you have probably heard of Verizon’s Fios. That’s short for fiber optics.

And since fiber-optic networks are already in use across the country, especially near major metropolitan areas, they’re the ideal place to mount these small cells that enable 5G.

The carriers are all working on building their networks. The cable companies are, too.

But there’s one company that already has more of this critical infrastructure than all of the carriers and major cable companies combined.

It’s got a nationwide network, literally:

And all that fiber, especially in the densely populated East Coast, is worth tons of money to the companies that want to get on the 5G network.

This one little-known company already has a bigger 5G network in place than all of the major wireless carriers: 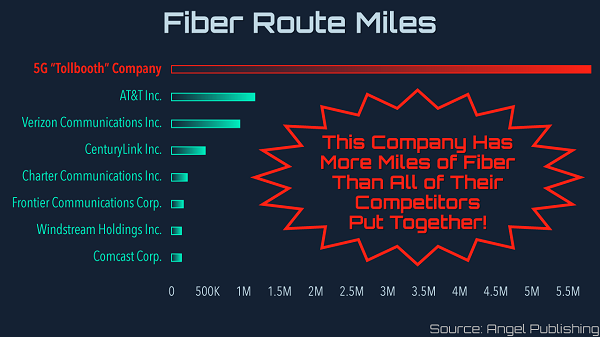 With nearly 6 million miles, this company’s network is over four times bigger than AT&T’s!

And whether you really think 5G will be game changing or not, you can’t deny that the carriers are all spending a ton of money to build it out.

All of the major carriers I mentioned already have contracts with this little-known company, and they're already expanding them because they know they’re going to need access to its networks to be able to compete with each other for 5G dominance.

It’s like the network is a highway and this company is the tollbooth. Everyone who wants to go for a ride has to stop and pay the toll collector.

And by betting on the company that’s collecting the tolls you’ve got to pay to get on the new network, you get to profit from all four major carriers as well as countless other companies paying the toll to get a piece of 5G.

But this company hasn’t been around very long. Most of the focus on 5G investing has been on the carriers (betting which one will win the race) and the technology behind it (chips, modems, switches, and routers).

Nobody has really paid any attention to the fact that there’s a lot of infrastructure necessary for this push to succeed. So that’s created an opportunity for extreme profits for investors looking for other ways to make some pay dirt from all the interest in 5G.

But once analysts start to realize the extent of the network this company has — and the universal need to access that kind of network to really achieve 5G connectivity — this is the first company they’ll turn to.

Once the spotlight is on, these shares are going to take off. They could easily double or triple within a year. They might even score early investors one of those storybook, retire-early quadruple-digit gains.

And the best part is that this company also pays investors a share of the profits it makes from collecting tolls to get on its network. So you get paid while you wait for your shares to skyrocket. That’s a pretty good deal, if you ask me.

5G has already caught the world’s attention, and companies helping spread it across the globe are already making extreme profits for prepared investors.

But the backbone of the network remains in the hands of a company nobody’s paying attention to. Its investors are going to reap some of the biggest rewards of the race to deploy 5G wireless.

I don’t have enough room to give you all the details here. I think I might have used too much space explaining 5G.

But I’ve got a report for you that will give you everything you need to get yourself invested in the company collecting a toll from all the big players fighting for 5G supremacy.

I suggest you check out the report right now. The stock has been on a tear recently and is up almost 15% in the past week.

With every passing day, it’s more likely that analysts will start boosting price targets and trumpeting buy recommendations. As soon as that happens, you can kiss your chance of early investor profits goodbye.

Click here now and give the report a read today. Then you can sit back and relax, knowing you’re in before the crowd AND getting paid to wait.