The Lithium Industry Just Got a Supercharge

For the past several months, the lithium industry and the companies in it have been getting pretty beaten down. As I write this (on Thursday, which is currently today but will be yesterday by the time you read it), Albemarle, the biggest producer, is down over 20% in 2018.

Analysts have been drumming up fear since late last year. They’ve been reporting that lithium demand is not growing. They’ve said producers are extracting too much and there will be an oversupply very soon. They’ve told us prices for the metal will drop astronomically and the companies that mine it will go bankrupt.

But newly released information suggests they’ve been 100% wrong this whole time. And it’s got me convinced that lithium and the companies that produce it are poised for their biggest growth spurt yet... 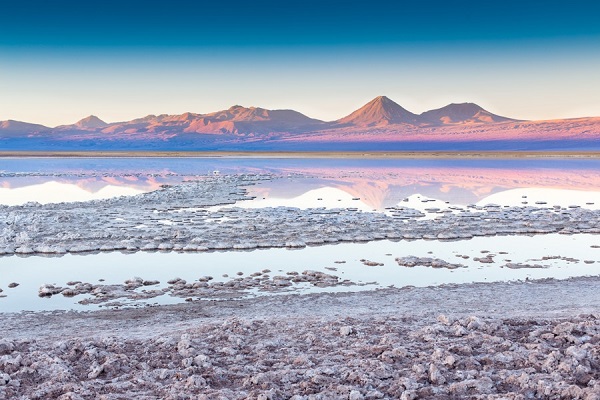 First off, as far as demand dropping, that’s not the case. It’s only getting stronger.

Case in point: Volkswagen AG recently put in an order for a bunch of lithium-ion battery cells. How many cells, you ask? Well, enough that the total purchase price is about the same as Tesla’s market capitalization.

Tesla is worth $52.292 billion as I type. So far, Volkswagen’s awarded about $47.7 billion in contracts to suppliers. But that number could get as high as $60 billion in short order. That’s a pretty big bet on the future of driving if you ask me.

And VW needs every one of those battery cells, too. This isn’t some power play to lock up supply and make it tougher for competitors to get them. By 2025, the company plans to have 80 new plug-in EV models on the road. And it plans to sell about 3 million of those EVs annually by that time.

That’s just one car company. You better believe that all the other big motor makers are working on their own electric fleets, too. And that’s some serious demand.

All the Tea Cars in China

Then there’s China. It’s the biggest EV market in the world after overtaking the U.S. back in 2015. Last year some 777,000 new-energy vehicles were sold in the country. And that number could shoot past one million this year.

The government is giving massive support to EV and battery companies. Its goal is to hit a sevenfold increase in new-energy vehicle sales by 2025. That would be nearly 5.5 million vehicles per year. In just China.

And it gets better. Because it’s not just Chinese government officials calling for that kind of growth.

Outside sources are predicting massive moves in the Chinese EV market as well. According to analysts at TechSci Research, China’s EV market is expected to grow by 30% per year until 2022. This research was based on 2016 data — the most recent full year available — and pretty much projects that China will become the Detroit of EVs.

That’s the largest population in the world and one of the biggest economies, too. And that’s just one country. China’s not the only place that’s trying to clean up its fleets and bringing serious demand for lithium with it, too.

In fact, according to a study recently completed by Variant Market Research, the global lithium market is going to grow at about 10% annually over the next six years. That means it’ll be worth $56 billion by 2025.

And they’re not the only ones seeing demand skyrocketing in the near future. INN Daily reported that global demand is expected to triple over the same period. It cited the growing prevalence and mainstreaming of electric vehicles as the largest driving factor.

Venture capitalists are turning their focus towards the industry lately. And they’re placing huge bets that demand will continue to blossom for lithium batteries.

Pretty much everything the analysts have been saying about the industry was contradicted in these more recent reports.

Demand for lithium has been steadily growing and shows no signs of stopping — or even slowing down some. Material shortages in the face of that growing demand have sent lithium prices ever skyward.

Long story short, as energy and vehicles get greener and cleaner, there’s only one direction the price of lithium and the companies that mine it are heading. And that’s up.

Proof’s in the Pudding

As if to drive home the points those researchers and officials are making, Albemarle announced first-quarter earnings last night after the market closed. And it blew estimates and previous years out of the water.

Sales grew, too. They were up 14% over the prior year and above analyst estimates by nearly $20 million.

And they were led by the lithium segment with net sales of $298 million, or 36.3% of overall revenues. That represented growth of nearly 40% over the previous year. Kind of makes you wonder about that demand slowdown and oversupply that analysts were talking about.

How are they selling that much more lithium if demand is dropping? How are earnings growing if prices are falling?

Simple answer: It’s not dropping, and they’re not falling. 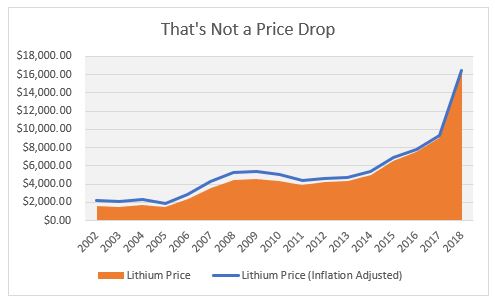 And management at the company is extremely confident in the coming year. They’re predicting full-year EPS in the range of $5.10 to $5.40. That means they expect the next three quarters to be even better than the first.

Revenues are expected to be strong the whole year, too, with full-year guidance coming in between $3.2 billion and $3.4 billion. That equates to three more quarters of sales above $820 million this year.

That doesn’t sound like an industry with dwindling demand and too much supply to me.

And yet Albemarle’s price has continued to fall today (now yesterday) as I’ve been writing this up. It’s down a little over 3%. That makes it down 25% in 2018. And it brings it back to prices we haven’t seen since the start of 2017.

I call that a buying opportunity. It’s textbook value investing. Everyone is scared. So we should be bold. Albemarle and its industry peers have fallen out of favor with the crowd. But when the crowd runs one way, intelligent investors run in the opposite direction.

That’s why I’m recommending setting up a long position in Albemarle common stock. The value is there. And once the fears abate, the stock price is going to recover that 25% and then some.

Starting to average your way into a position now and adding on any future dips will set you up for a strong rally in the near future. Albemarle and the lithium industry still have their best days ahead.

P.S. Briton and I are getting ready for our cannabis-investing workshop at MoneyShow Las Vegas next week. We’ve secured FREE admission for all Wealth Daily readers. You can simply click this link to secure your spot. We’re looking forward to seeing you there. But if you can’t make it, we’ll be recording it and will make the video available afterwards. You can access it after the conference by following this link.

In Case You Missed It

Last week, I wrote to you about investment horizons. And I let you in on a secret strategy that’s nailing winners left and right.

I promised that once the strategy was ready to go public, you’d be the first to know. And I kept my word.

Yesterday, you got the opportunity to sign up for a webinar — the first of its kind — where you can learn how to harness this powerful strategy for yourself.

But I want to make sure you have every chance to take advantage of this amazing opportunity.

Just click here and you’ll be able to secure your spot and start securing those profits, too.